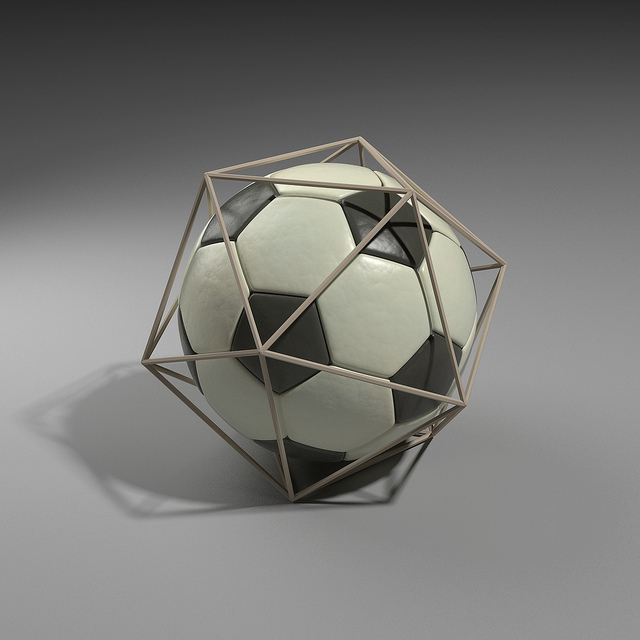 Let's start with a number, by chance a palindrome: 1441. Imagine taking that many photographs of a single object, a soccer ball, say - obsessively capturing it from every angle to expose all the details. Those 1441 images provide all the evidence needed to illustrate and understand the three dimensional structure of that soccer ball. Each shot reveals another curve of the sphere, another line in the checkered pattern, another scuff or scratch along the surface.

An adept programmer or the right piece of software can then combine those photographs to generate an accurate 3D model of that ball. More than a thousand 2D images may take time to align, but at least the structure is simple. But what if that soccer ball was itself the size of a skin cell, its patterns were smaller than airborne viruses, and you still needed over a thousand photos to know its structure?

That's the challenge that a team at Brookhaven National Laboratory overcame with a new transmission x-ray microscope (TXM), which successfully combined 1441 images of a lithium-ion battery electrode into a detailed 3D structure. The TXM, hooked up to an x-ray beamline at Brookhaven's National Synchrotron Light Source, generates unparalleled image resolutions, as demonstrated in a new paper published in Applied Physics Letters.

Because the efficacy and energy potential of an electrode relies upon its internal structure, or the organization of its pores and particles, the TXM team chose it as a first test. The path to deeper understanding and better design of future batteries hinges in part on high-resolution 3D images.

"The clarity in the 3D image is fantastic," said physicist Jun Wang, who led the research team. "We can see very fine details of the internal structures of the electrode, which helps us understand how the microstructures affect performance." 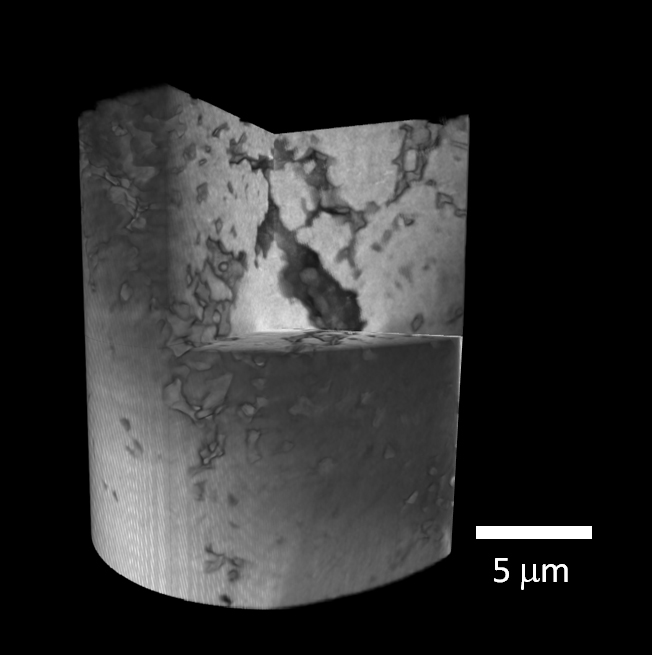 This 3D reconstruction of a lithium-ion battery electrode reveals nanoscale structural details. The electrode diameter (20 micrometer) is about four times smaller than a single pixel on an iPhone 4 Retina display.

The electrode itself has a 20-micrometer (millionth of a meter) diameter, much smaller around than the average human hair. The crucial structural details revealed by the TXM, meanwhile, are 1000 times tinier - as little as 25 nanometers (billionths of a meter). On that scale, a micrometer wobble is like someone kicking the soccer ball a foot in either direction between each photo.

The challenge for the Brookhaven team came in correcting for the inevitable shifting of that little battery bit as it rotates and the microscope captures every angle. By mounting the electrode on a unique platform with three precise sensors that detect and record each microscopic wobble, a computer can automatically align thousands of images and rapidly generate a 3D model. This automation is the first of its kind, resulting in higher speeds and superior images.

The applications for the TXM, built by the California-based company Xradia, extend beyond energy research, promising insights in biology, environmental science, and more. Collaborative heavyweights such as IBM and DARPA have already made plans to use the TXM at Brookhaven's NSLS to probe microchips and improve national security.

Learn more about the technology, including its spectrographic potential and the video-speed image capture planned at NSLS-II in the official press release.