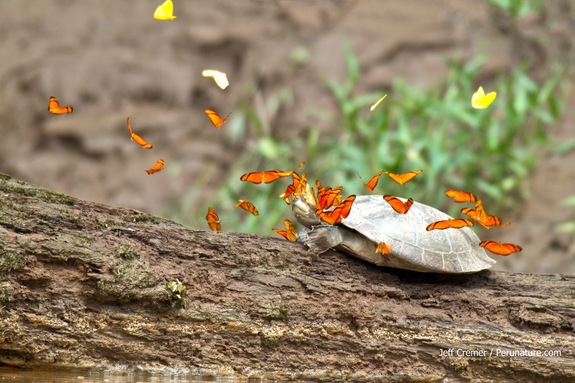 The Amazon region is notoriously deficient in sodium because of its large distance from the ocean and because the Andes mountains block the delivery of windblown minerals from the West. Some minerals travel from the east, but much of the air is cleaned by rain before the minerals can make it to the western region of the Amazon Basin.

So if you were a butterfly, where would you find a readily available source of salt in the Amazon? The answer is not very obvious, unless you look at the photo of a yellow-spotted river turtle (top). According to scientist Phil Torres, a graduate of Cornell University who conducts research at the Tambopata Research Center in Peru, the butterflies are attracted to the sodium in the turtle's tears. The turtles obtain sufficient sodium from their diets, but the herbivorous butterflies must obtain it from other sources since plants are not a good source of sodium. This is reportedly the only region in which this phenomenon has been observed.

Other sources of salt for the Amazonian butterflies (that are not nearly as interesting or picturesque) include urine, river banks, puddles of water, and human sweat.

According to a quote from Live Science, Torres said: "Potentially, they could be getting other resources out of those eyeballs that we don't even know about. Basically, we have to go start swabbing turtle eyeballs and see what we get."