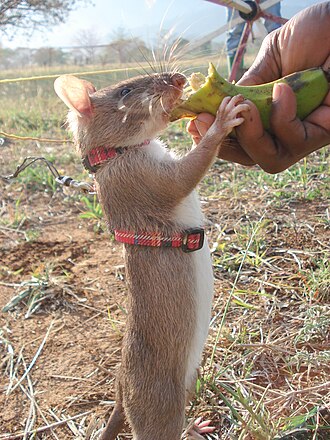 In a newly published study from Physiological Reports, researchers were interested in learning more about the basic physiology of African giant rats (Cricetomys gambianus). According to the study, heart rate is one of several "physiological constants" that offer a clue into how an animal might interact with its environment as heart rate may be influenced by season and patterns of food consumption among other variables. This particular species of rat is of interest as they are often kept as exotic pets while others have been trained to detect odors or are consumed for meat.

The research team collected African giant rats in Northern Guinea each season for three years and measured heart rates three times per day by listening to the chest with a stethoscope. Interestingly, they found that heart rate was highest during the cold-dry (November - February) and rainy seasons (May - October). Additionally, heart rate was highest during the middle of the day and females had consistently higher heart rates than males during the hot dry (March - April) and cold dry seasons. Since heart rate is negatively correlated with body mass, the higher heart rate in females may be a consquence of their smaller body mass on average.

The findings from this study, similar to other rodents, points to the importance of considering factors such as season, time of day and sex when measuring heart rate.