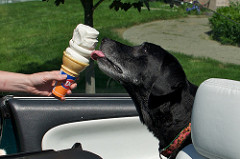 Researchers at the University of Cambridge in Britain recently studied 'willpower' in pet Labrador retrievers. After allowing each dog to smell a hot dog, the researchers placed the hot dog in a hamster cage and sealed it shut with duct tape. While some dogs showed only mild interest in the sealed-up hot dog, others were fixated on the out-of-reach treat. One dog, named Ash, broke apart the contraption to obtain the treat. This is interesting because although Ash is not obese or overweight, he has a genetic mutation that is linked with obesity. This study is part of an ongoing project examining genetics of obesity in dogs, called the GOdogs Project.

The genetic mutation in Ash is caused by a missing piece of the gene that encodes for pro-opiomelanocortin (i.e. POMC). POMC is known to act on the hypothalamus of the brain to regulate metabolism and food motivation. The findings from this study were published last year in Cell Metabolism and show that about 1/5 of Labrador retrievers have this mutation which is linked with obesity and increased appetite. This mutation may also be why Labrador retrievers are easy to train as guide dogs using food rewards.

One goal of this ongoing dog research is to help understand obesity in humans. In fact, estimates indicate that around 10,000 people globally have POMC mutations and even a partial loss of function of the POMC gene can contribute to obesity. In addition, errors in a similar gene may likewise impact metabolism. Like humans, obesity in dogs can lead to difficulty breathing, joint damage, and inflammation. Although, dogs are less likely to develop diabetes as obese humans. Thus this research has the potential to lead to a better understanding of the genetics of obesity and possible treatments for the condition in both dogs and humans.