The Universe is Accelerating? 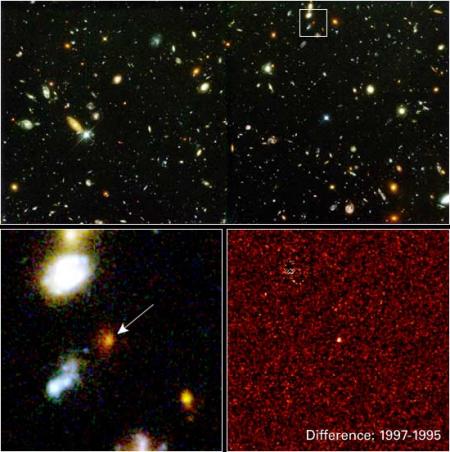 Sure, there's dark energy, but what does that really mean? First off, there's the bizarre phenomenon we see: very distant objects appear dimmer than we expect in a Universe filled with just matter and space. This supernova (above) should appear much brighter for how distant it is, based on what we know about supernova. This means one of three things are going on:

Well, supernova by themselves aren't enough to necessarily figure this out, but we can add in lots of other data: the Baryon Acoustic Oscillation (below) data for one, or the Cosmic Microwave Background data, which both support the case of #3, that the expansion rate is different than we thought.

Furthermore, when we try to make models of the dust, it doesn't work properly. For one thing, dust blocks light differently at different wavelengths, but the supernova light dims the same across all wavelengths. (The science-y term is that "dust" isn't "grey". Somehow, that sounds fancy?) So the last hope for not having dark energy, or needing to change the expansion rate of the Universe, is that supernova could be evolving. Well, the plot below indicates that might be possible in theory, although the scientists who work on supernova can't make them less bright in the past:

When you look at this plot, the stringent constraints come from the points on the left, where the errors are small. You can see that the only examples that work are the solid and dashed pink lines and the dashed blue line. (Even the green line is off by too much for the data points on the left half of the graph.) So while evolving supernova are a possibility, the combined evidence from all sources is overwhelmingly in support of a Universe with dark energy.

But what this means is that the Hubble constant (which is 71 km/s/Mpc today), which would normally asymptote to zero as all the matter in the Universe expands away, actually asymptotes to about 60 km/s/Mpc. Now this is important for things which are 10s, 100s, or 1000s of Megaparsecs away from us, but for local things, like say, the Sun from the Earth, this causes an "extra" expansion of about one micron per second. In other words, this has virtually no effect on the local Universe, including our entire galaxy, even including Andromeda. But for everything farther away than that, the Universe will just keep on expanding and expanding, without slowing down. This is an acceleration relative to a Universe with no dark energy, but the expansion rate isn't speeding up; it just isn't slowing down.