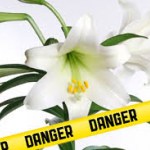 dr. dolittle | April 18, 2014
Image from: bluecrossanimalhospital.ca The FDA has issued a warning that Easter lilies are toxic to cats. According to veterinarian Dr. Melanie McLean at the US Food and Drug Administration ingestion of even a small portion of the leaves, pollen or flowers of the plant are very poisonous to cats. Initial complications include vomiting but then may lead to kidney failure and death if not treated. If you think your cat may have ingested a lily, then seek immediate medical attention for your pet. Tiger, Asiatic, Day and Japanese Show lilies are also highly toxic to cats. Dog owners take…

It's Rough Being the Easter Bunny

grrlscientist | April 3, 2010
tags: cartoon, easter, humor I know this cartoon is as old as I am so you've all seen it a hundred times already, but it never fails to make me laugh, so I am sharing it with you anyway.

The True Story of Easter

gregladen | April 1, 2010
This is not only the true story of easter, but it is also a commentary on which is better, cats or dogs. Verily, many mysteries are explained in this epic documentary: h/t: Julia

grrlscientist | March 31, 2010
tags: Peep Microwave Disaster, marshmallow peeps, easter, humor, funny, silly, health, streaming video This video is a demonstration of what happens when a marshmallow peep is placed in a specially modified 100,000W microwave oven. The result? Well, it's not pretty!

grrlscientist | March 30, 2010
tags: marshmallow peeps, The Peeps, The Birds, easter, parody, humor, funny, silly, movies, streaming video This is a hilarious trailer for the spoof, "The Peeps": a parody of Alfred Peepcock's ... erm, Hitchcock's ... "The Birds." This film documents the biggest marshmallow threat to humanity since the Stay Puft Marshmallow Man. 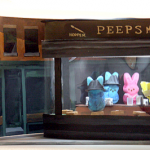 bioephemera | April 13, 2009
NightPeeps Melissa Harvey (after Edward Hopper) It's that time of year again! As I roasted blue Easter Peeps over the gas stove yesterday, I eagerly awaited this year's collection of Peep dioramas from the Washington Post - and here they are! View the complete Peeps Show here. Be sure to check out "Double Peep Strike" (Miracle on the Hudson), Bernard Peepoff, and the Trek Peeps of Stardate 2351.6. Many dioramas play on DC themes: "Peep to the Right" refers to clueless tourists who stand on the left side of Metro escalators, blocking those of us who use public transit to get to work; "…

razib | April 12, 2009
Gallup has a new report up, This Easter, Smaller Percentage of Americans Are Christian, which is rather self-explanatory. These data aren't surprising, other surveys report the same general finding. Here's an interesting chart with some long term trends: I want to point to the numbers for Catholicism. In the early 1990s I remember reading popular press accounts about how Catholicism would become the dominant religion of the United States in the early decades of the 20th century because of immigration. That doesn't seem like it's panning out. Why? The American Religious Identification…

I Discovered Why the Easter Bunny Missed Me Today ..

grrlscientist | April 12, 2009
tags: easter bunny, easter bunny is dead, holidaze, holidays Image: Orphaned [larger view]. On the way to the subway today, I photographed this tragic accident. This must be the reason I didn't get any Easter candy this year! I am bummed!

Jesus Christ: A Cheap Lampoon of The Life of Brian

grrlscientist | April 12, 2009
tags: Jesus Christ, The Life of Brian, easter, humor, satire, religion, holidays, holidaze, streaming video This streaming video is from the British series Not the nine o'clock news. It comments on the controversy created by the Biblical story about Jesus Christ and how it is really a cheap rip-off of Monty Python's popular film, The Life of Brian [3:24]
Advertisment