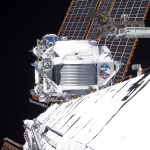 esiegel | April 3, 2013
"On what can we now place our hopes of solving the many riddles which still exist as to the origin and composition of cosmic rays?" -Victor Francis Hess We've come a tremendously long way in our understanding of the Universe, but there are plenty of mysteries still to be revealed. Way back in the late 1800s, we noticed that there was an unaccounted-for excess in the amount of ionization in the upper atmosphere, something that our Sun and Earth, by themselves, couldn't explain. Victor Francis Hess -- the originator of the quote atop -- decided to go see for himself, and conducted a series of… 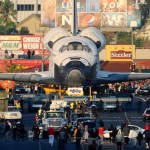 The Earth is the New Moon

cevans | October 16, 2012
Stewart Brand, writing about space colonies, observed that "if you live in a satellite, the Earth is something that goes on in your sky." For Felix Baumgartner, the daredevil skydiver who seduced the world with his chiseled jaw and seeming invulnerability to fear (and who broke the sound barrier with his body last weekend) the Earth is something else. The satellite he leapt from, a weather balloon 24 miles above the Earth, wasn't his home. But briefly, and especially for the millions who watched the gossamer balloon float upwards to the strange blue-black gradient of space's edge, it turned…