Lucy and the football 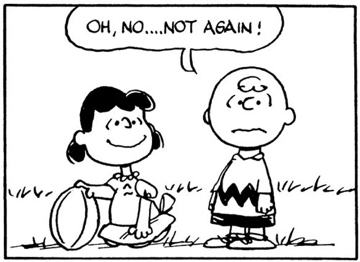 Why won't anyone play my game?

Klinghoffer is upset that no one will come to the Disco. blog, let Disco. staff ban any outside comment, and debate the merits of the book which several Disco. staffers wrote and which Disco. self-published.

Instead, critics are feeling free to explore the book's many failings on their own blogs, and in comments on Disco.-affiliated Facebook pages.

And when these critics offer a gentle "I would prefer not to" in answer to Klinghoffer's poorly-written and ill-conceived invitations, Klinghoffer's response is to demonstrate exactly why no one should submit themselves to his editorial oversight, by insulting and demeaning not just the invitee, but the entire universe of "Darwinists."  They don't want to play football, they just want to mess with people they don't like.

If Klinghoffer and his Disco. 'tute colleagues really want the scientific community to review their absurd and outdated essays, there's a simple way to do that.  Write them up as proper scientific papers, and send them off to real scientific journals.  Editors there will evaluate the papers, and send them out to anonymous reviewers for further scrutiny.  Those reviewers will make suggestions, and if the Disco. kids can make the suggested changes, or explain why they're wrong to the editor's satisfaction, the papers will be published for scientists to read.  Then the real peer review would begin: if no one else ever cites those papers, then they didn't matter much.  If the papers are frequently cited by people who agree with their conclusions, then they made a good point.  If the papers are frequently cited by people offering another reason why Disco. is full of goose doots, then the papers failed.

Of course, the Disco. gang would rather set up their own vanity journal, and invent an ad hoc review system of blog debates than submit themselves to real review by the scientific community.  Anyone who accepts their invitation is setting himself up for a fall.