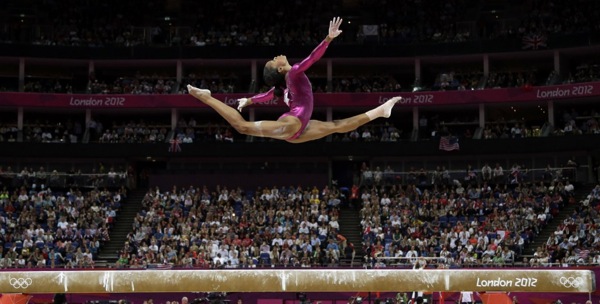 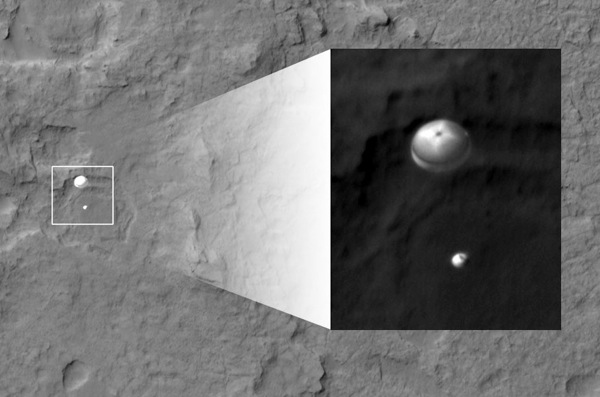 Oh! I have slipped the surly bonds of Earth
And danced the skies on laughter-silvered wings;
Sunward I’ve climbed, and joined the tumbling mirth
of sun-split clouds, — and done a hundred things
You have not dreamed of — wheeled and soared and swung
High in the sunlit silence. Hov’ring there,
I’ve chased the shouting wind along, and flung
My eager craft through footless halls of air....

Up, up the long, delirious, burning blue
I’ve topped the wind-swept heights with easy grace.
Where never lark, or ever eagle flew —
And, while with silent, lifting mind I've trod
The high untrespassed sanctity of space,
Put out my hand, and touched the face of God.

On Sunday night, a one-ton, SUV-sized, plutonium fueled robot landed on Mars.  NASA launched the rover 8 months earlier, aiming to have it land in a Martian crater which allows access to strata from early in Martian history, and has features shaped by flowing water, and thus may contain ideal conditions for the detection of life on Mars.

Curiosity, the robotic rover, landed about 2 kilometers from the bullseye NASA had painted for it, having traversed about 600,000 kilometers of space. Simply getting Curiosity to its landing site on Mars intact was a massive engineering feat, involving an Atlas V rocket, heatshields, a parachute, retrorockets, and a skycrane to lower the rover from a platform floating in the sky (in the image above, you can see Curiosity hanging from the parachute on its way down; the photo was taken by a satellite NASA placed in orbit several years ago).  And that bit was necessary just so the really remarkable part could start.  Once it landed, Curiosity sent a signal back to Earth, relaying it through one of the satellites we've placed in orbit around the alien planet, and the satellite sent the signals on to Earth-based satellite dishes.  Soon, Curiosity will unleash its high-gain antenna, and will be able to communicate with Earth directly as well.  NASA engineers will send orders to Curiosity, and the robot will combine those and its own autonomous systems to navigate across the alien landscape and conduct science experiments.

The tools Curiosity carries are designed to search for organic compounds, the chemical signatures life might have left behind.  They are the tools that will tell us what forces shaped Mars over billions of years. But they are also tools necessary to make plans for protecting humans when we follow Curiosity to our sister planet.

Little wonder that thousands of people crowded into Times Square at midnight to watch Curiosity land.

Little wonder that I teared up as I tried to explain what this all meant to my 3 month old son.

What a wonderful world he'll grow up in!

What wonderful worlds, in fact.

We sent Curiosity to learn, but we also did this because excellence is a virtue, and you excel by exceeding your limits.  How appropriate, then, that the Mars landing happened during the Olympics: both are expressions of that human striving to expand the realm of the possible.  Some do that by dedicating themselves to running faster than anyone who ever lived before, others by leaping higher or farther than anyone else.  The Curiosity landing was the longest of long jumps.

And there will be other, longer, harder jumps.  Someday, humans will walk in the Gale crater, and mark Curiosity's landing site with a plaque, and historical preservationists will protect its trackmarks.  What we learn from Curiosity today brings us closer to that dream.

Why would anyone want to go to Mars in person?  Here's Carl Sagan, speaking to future Martian explorers:

I don't know why you're on Mars. Maybe you're there because we've recognized we have to carefully move small asteroids around to avert the possibility of one impacting the Earth with catastrophic consequences, and, while we're up in near-Earth space, it's only a hop, skip and a jump to Mars. Or, maybe we're on Mars because we recognize that if there are human communities on many worlds, the chances of us being rendered extinct by some catastrophe on one world is much less. Or maybe we're on Mars because of the magnificent science that can be done there - the gates of the wonder world are opening in our time. Maybe we're on Mars because we have to be, because there's a deep nomadic impulse built into us by the evolutionary process, we come after all, from hunter gatherers, and for 99.9% of our tenure on Earth we've been wanderers. And, the next place to wander to, is Mars. But whatever the reason you're on Mars is, I'm glad you're there. And I wish I was with you.

What will we find on Mar?  Life? Maybe.  Signs life once existed?  More likely, but that's not what Curiosity is there for.  New insights into conditions on Earth billions of years ago, when life first emerged?  Likely.  Unexpected insights into how Mars works?  Certainly.  And that's what this is about.

The wonder I feel as I ponder Curiosity's improbable journey is the wonder I feel when I look at Gabrielle Douglas sail effortlessly through the sky.  Both are expressions of the human utmost, and a challenge to all who come later.

There are, inevitably, those who would cheapen and trivialize these accomplishments.  Talking heads on Fox News felt obliged to consider whether Gabby's outfit was sufficiently patriotic, forcing feats of awe-inspiring athletic perfection into a stale political pissing match.  Meanwhile, Disco. 'tute scrivener David Klinghoffer thinks NASA spent $1.7 billion and years of interplanetary engineering "in an effort, however doomed, to refute intelligent design [creationism]."

It must be sad to live life bound so tightly to a partisan agenda, to be incapable of taking joy in the joyous, being awed by the awesome, feeling wonder in the wonderful.

Images via AP and NASA.