X-STEM - presented by Northrop Grumman Foundation and MedImmune - is an Extreme STEM symposium for elementary through high school students featuring interactive presentations by an exclusive group of visionaries who aim to empower and inspire kids about careers in science, technology, engineering and mathematics (STEM). These top STEM role models and industry leaders are sure to ignite your students’ curiosity through storytelling and live demonstrations.

Our spotlight on our X-STEM Speakers begins with Geneticist, Physician and Director of the NIH, Dr. Francis Collins. 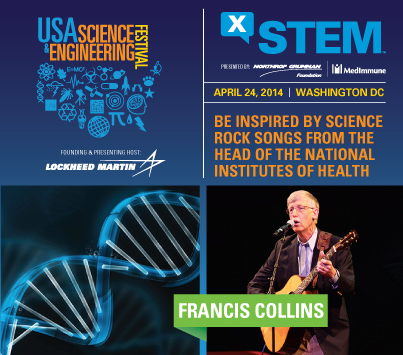 Raised on a small farm in Virginia's Shenandoah Valley, Francis Collins (the youngest of four sons) was home-schooled by his mother until the sixth grade. Throughout most of his high school and college years, Francis aspired to become a chemist and ironically had little interest in what he then considered the "messy" field of biology – the field that would later encompass much of his professional life. Earning his B.S. degree in Chemistry from the University of Virginia and later his Ph.D. in Physical Chemistry from Yale University, Francis had an awakening at Yale during a biochemistry course in biochemistry that changed his life. The course sparked his interest in the molecules that hold the blueprint for life: DNA and RNA, which led him to realize that a scientific and medical revolution was on the horizon in molecular biology and genetics. As a result, Francis switched his field of specialization and enrolled in medical school at the University of North Carolina at Chapel where he later earned his M.D.

The “revolution” in molecular biology and genetics that excited Francis, soon gave rise to the Human Genome Project, the massive worldwide endeavor among scientists to identify and sequence the estimated 30,000 genes in human DNA (deoxyribonucleic acid) to better understand how we might diagnose and treat human disorders.

After being nominated last summer by President Obama, and confirmed by the U.S. Senate, to head the NIH— the nation’s top governmental agency responsible for conducting and overseeing medical research and programs designed to improve the health of the nation – Francis has been focused on leading the NIH’s 27 institutes and centers which together employ 18,000 people. The agency has a budget of $31 billion, about 80 percent which is distributed to scientists elsewhere for research. One look at Francis’ formidable career accomplishments and you will know why he was picked for such an important, high-profile position. Click here to read a list of his achievements.

We thank Dr. Francis Collins and the National Institutes of Health for participating in our new X-STEM Extreme Symposium! We look forward to X-STEM becoming a new school tradition!