Going out with a Bangs: Control of Human Brucellosis by means of an Animal Vaccine

This is the thirteenth of 16 student posts, guest-authored by Jessica Ludvik. 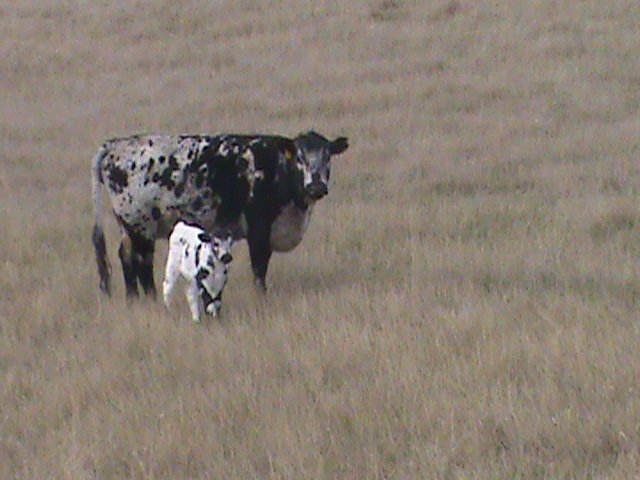 One Disease, Many Species

Brucellosis, more commonly known as undulant fever in humans or bangs disease in cattle, is one of the oldest bacterial scourges of livestock-producing nations, especially those in which the animals live in close proximity with the human population.  The disease is caused by bacteria of the genus Brucella.  Within this category are many species of bacteria, each almost exclusive to a particular animal species.  A few of the most common seen in veterinary and human medicine today are listed in Table 1.  Of these, all but B. ovis has been shown to be transmissible to humans [1]. 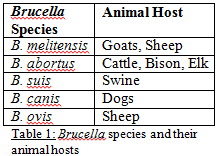 Why Should I care about Brucellosis?

The presence of Brucellosis in a region is catastrophic to the economy and animal and human health.  In many livestock species, the bacteria elicits its major effects on the reproductive system, leading to late term abortions and stillbirths in females, weak newborns leading to death soon after birth, and inflammation of the testicles and testicular abscesses in males [2].  Abortion storms of 30-80% have been documented in cattle herds infected by B. abortus [2].  B. abortus and B. melitensis are the most common of the strains associated with human infection, and the World Health Organization (WHO) estimates that 500,000 new cases of human cases of human Brucellosis occur annually, making it the most common zoonotic disease in the world [3].  Its importance has earned it a spot on the Center for Disease Control’s (CDC) 2012 list of Nationally Notifiable Conditions.  To view this list visit the CDC’s website at http://www.cdc.gov/osels/ph_surveillance/nndss/phs/infdis.htm.

Symptoms include fever, profuse sweating, headache, fatigue, depression, loss of appetite, irritability, cough, chest pain, and upset stomach [1].  It can also affect bones and joints causing arthritis [1].  If untreated, symptoms may recur after a latent period of many years [1].  For the official case definition, click http://www.cdc.gov/osels/ph_surveillance/nndss/casedef/brucellosis_current.htm.

Most human cases of Brucellosis are a result of occupational exposure to the bacteria [2].  It can penetrate mucus membranes of the digestive or respiratory tract, or can enter through skin wounds or abrasion after contact with reproductive fluids, aborted fetus or placenta, or aerosolized particles from the aforementioned [2].  Brucellosis can also be contracted by people via accidental injection with the cattle vaccine or by ingestion of unpasteurized dairy products of infected animals [2].

Most people diagnosed with Brucellosis recover fully with treatment, which usually consists of a six to eight week antibiotic regimen [4].  Less than 2% of untreated individuals die, however chronic complications such as endocarditis and meningitis may occur [2].

On the Global Scale….

As the major mode of human infection is through direct contact with infected animals otr through the consumption of products from those animals, the most logical means of disease prevention in the human population has been through the prevention of the disease in animals.  Many developed regions such as North America, Australia, and Northern Europe have dramatically reduced the prevalence of brucellosis in livestock through widespread vaccination efforts [5].  The United States Department of Agriculture (USDA) implemented an eradication program in 1934, which involved the testing and identification of diseased animals, slaughter of infected animals, and trace back and investigation of their herds of origin [2].  In 1951, Animal Plant Health Inspection Services (APHIS) made compliance of all states mandatory [2].   Currently, RB51 vaccine is the standard in cattle and Rev-1 vaccine in goats.  Both of these are attenuated live vaccines, which are strains of bacteria that cause a similar but less severe infection in the vaccinated individual, so the animal’s immune system will respond to and eliminate the agent.  Immune cells then remember the bacteria, so that if the animal is exposed to the wild type strain of bacteria, it will destroy it before it becoming infected.  One of the advantages of the RB51 vaccine that has helped to make testing for the disease effective is that the vaccine strain lacks a specific surface molecule that the wild type strain of bacteria possesses, so tests can distinguish between diseased cattle and those vaccinated with RB51 [1].  The Program has decreased the number of infected herds in the US from 124,000 in 1957, to 2 as of December 2003 [2].  These vaccines are not approved for human use, and as mentioned before may actually cause clinical illness if accidently injected into the handler [1].

In February of 2008, all States in the US were classified as disease-free [6].  In September of that year however, the states of the Greater Yellowstone Area (GYA), Montana, Wyoming, and Idaho lost their disease-free status [6].  For more information on this, see APHIS’s website at http://www.aphis.usda.gov/newsroom/content/2009/10/printable/brucellosis_concept_paper.pdf.  What was the source of the infections that triggered this revocation?  Brucellosis is endemic in the herds of elk and bison in the area.  8-60% of elk herds and 11-75% of bison herds were positive for B. abortus by serologic tests [7].  Studies of mapping the molecular profiles of the isolates from this area show that cattle are more likely to be infected by elk than bison, and indicate that there may be a possibility of transmission between cattle and feral pigs, though it is unclear of the direction [7].  These wild reservoirs pose another significant barrier to the complete eradication of the disease in the US.

The issue of wildlife reservoirs for Brucellosis will need to be addressed to prevent transmission of the disease to people, especially those at particularly high risk of infection by this route, such as hunters, hikers, and campers.  Some proposed strategies include the daunting tasks of selectively culling bison herds and vaccinating elk and bison [7].

Control of human Brucellosis through vaccination of livestock has been successful thus far because it virtually eliminates our exposure to the infectious agent, so it is a sort of indirect prevention. But how will we prevent disease outbreak should we be exposed by a different means?  There is no human vaccine for Brucellosis, it can be aerosolized, and it only takes 10-100 organisms to cause disease in humans [1].  All these characteristics make it a possible agent of bioterrorism [1].  Although the mortality rate is low, the morbidity rate is high, so an outbreak would cause a tremendous consumption of money and resources to treat the affected, and a dramatic decrease in workforce and morale. Control of human Brucellosis is another area in which we must not allow ourselves to fall victims to our own success.  We must continue to support the vigilant monitoring and livestock vaccination efforts and encourage efforts in the development of a vaccine that is safe and effective for use in humans.

While I agree broadly that vaccination may play a role in the control, or dampening down of Brucellosis I do not agree that it has been the main driver to control transmission to humans.
By far the greatest factor in the control of spillover to Humans has been pasteurization and to a lesser degree better hygiene practices in abattoirs. Importantly, programes of clinical surveillance active testing and slaughter policies have been able to reduce prevalence and incidence very significantly and abort the clinical process and shedding of pathogen to the environment again reducing the possibility of contact with Humans. Saying that, I would stress that I would elect pasteurization and urbanization as the 2 single most important factors in reducing Human Brucellosis in developed countries.
In fact, a country can only trully hope to eradicate this disease from livestock if it does NOT vaccinate livestock, vaccination is ussually only a viable option in the early stages of an eradication programme.
Regards.