Hey, how about that! Three people in our optics group here at Texas A&M (Professor Alexei Sokolov, postdoc Miaochan Zhi, and grad student Kai Wang) had a photograph from one of their optics experiments make the Optics and Photonics News Image of the Week: 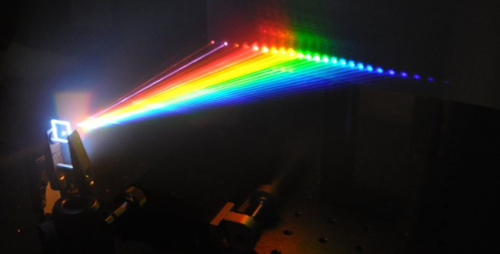 Image of the Week: Raman sidebands from a femtosecond pulse

The crystal in the foreground is being hit by two pulses of light, which interact with the material and each other in such a way as to form numerous other beams with different wavelengths, forming the rainbow of discrete beams seen in the photograph.

This is an effect which bears the acronym CARS - Coherent Anti-Stokes Raman Spectroscopy. Roughly, the crystal is composed of a bunch of molecules which can be modeled as atoms connected together by elastic bonds. Whack these molecules very hard with an intense laser pulse, and the molecules will start vibrating in much the same say as a lump of Jell-O would if you poked it. Send a second pulse through those vibrating molecules and it will be scatter off that vibration and either transfer some energy to the vibration (Stokes scattering) or gain some energy from the vibration (anti-Stokes scattering).

Ok, but why do we get discrete beams, and why do they come out at different angles? There's two principles at work here. The first is conservation of energy. The energy of the incoming photon, plus (or minus) the energy removed from (or added to) the vibration, is the energy of the outgoing photon. The energy of a molecular vibration is quantized - molecules can't vibrate with just any amount of energy. Thus $latex \Delta E$ can't vary continuously but can only take quantized values (Maybe something like 0.1 eV, 0.2 eV, 0.3 eV..., though it's never that neat and clean.).

There's a tremendous amount of interesting physics that you can do with CARS and related techniques. But it's nice when the physics is also photogenic.

CARS and other horrible puns

Let's say you've got a water molecule. It doesn't have to be water, but it helps if it's one we can easily picture: You can imagine water vapor as an ensemble of many of these molecules flying and bouncing around in their container. This translational motion is not the only kind of motion they'…

Last week, John Baez posted a report on a seminar by Dzimitry Matsukevich on ion trap quantum information issues. In the middle of this, he writes: Once our molecular ions are cold, how can we get them into specific desired states? Use a mode locked pulsed laser to drive stimulated Raman…

The latest snowstorm is wreaking some havoc on my plans for the day, which means I'm going to lift another question and answer from the Physics Stack Exchange, with some modification. This one is a question about thermal radiation: What are the quantum mechanisms behind the emission and absorption…

What's So Interesting About Extreme Lasers?

The second in the DAMOP research categories I talked about is "Extreme Lasers," a name I was somewhat hesitant to use, as every time I see "Extreme [noun]," I get a flash of Stephen Colbert doing air guitar. It is, however, the appropriate term, because these laser systems push the limits of what's…
Advertisment