Why is the sky blue? It's a classic question - probably the classic question of the genre of explanatory popular physics. The famous short version of the answer is that Rayleigh scattering by air molecules affects short-waveength light more than long-wavelength light, and so blue light tends to get scattered in random directions to create the diffuse blue we know and love. But like almost every answer physics can give, the answer leads to more questions. Why does Rayleigh scattering scatter short-wavelength light more strongly? This is a fairly involved question to answer from first principles, and your average physics major won't study the issue in depth until probably the junior year. The process of digging deeper and deeper into questions is how physics advances, and even thinking about old solved problems can lead to new insight.

Let's see if we can find some insight into a similar question: why are clouds white?

Clouds are made of water droplets. Pour yourself a glass of water. You'll notice that the glass of water is not white. It is in fact perfectly clear. Well, glasses of water of big. Maybe tiny droplets are different. Dip a toothpick into the water and get the smallest droplet you can, and put it on a hard surface. You'll be able to see the surface through the water with equal clarity. Even small drops of water are themselves clear. 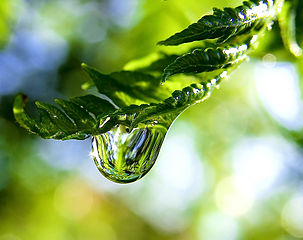 So if clouds are water, and water is clear, why aren't clouds clear? They look to us a lot like they reflect light. Light that shines on them bounces off, and when we're looking at the bottom of clouds on a stormy day we see that most of the sunlight doesn't make it through the clouds because it has reflected off the tops of the clouds.

Here's a short New York Times piece attempting to answer the question. The answer given there is that droplets do scatter light through a process called Mie scattering, which is essentially just refraction. The direction of the incoming light gets bent and changed just as in the photograph of the droplet above. Crucially, Mie scattering is more or less independent of wavelength. If droplets scatter all colors of light, "all colors" is basically white.

That's true, but not complete. Why should this make clouds reflect white? How is it that randomly-directed scattering can preferentially send the light back in the direction it came from?

Imagine you're walking down the sidewalk and you flip a coin. Heads you take a step forward, tails you take a step back. You keep up this process for many flips of a coin. Your position over a thousand steps might look like this: 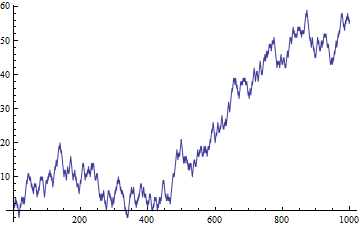 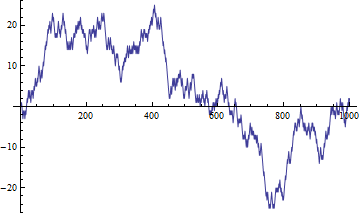 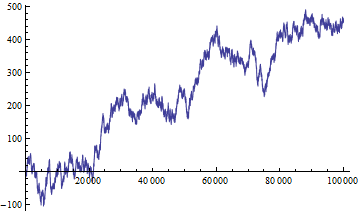 And that's why clouds are white. Each drop, or at least each several drops, are essentially a step of a random walk for the incoming light waves[2]. If the cloud is very large compared to the size of the step (which is on the order of a few times the distance between drops), then the light is much more likely to wander back out to the same side of the cloud it came in than it is to wander all the way to the other side.

This concept generalizes to all kinds of light scattering objects. White sand is mostly clear silica particles, but this same scattering process bounces the light back diffusely. In an astrophysical context, reflection nebula work in similar ways: 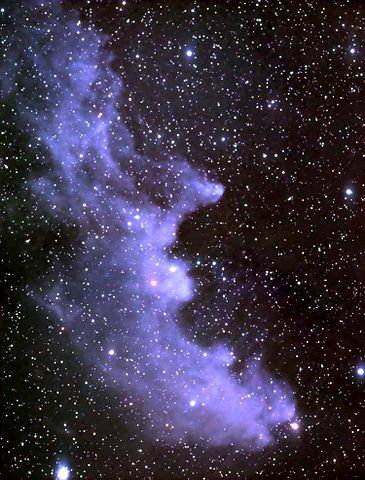 Sometimes there's a lot of insight to be gained by asking kid-style questions, even if the path to the answer is kind of random.

[1] You're not alone if you think these look like stock market charts. There's a pretty large body of academic literature that models financial markets as random walks with varying levels of bias.

[2] There's a temptation to talk in terms of photons bouncing around. This temptation ought to be resisted. The process of scattering is entirely a classical wave phenomenon.

But a cloud is 3 dimensional and in 3 dimensions the probability is only .34 that the random walker will return to the origin in an infinite number of steps. As opposed to your example (1-D) with a P=1.0 of return to origin.

This is a good point, though I don't think it affects the result. We're not worried about returning to the origin specifically, we're interested in returning to the surface of the cloud. So the process we're concerned about is more like a 1D random walk up and down an axis normal to the surface of the cloud. Should the light emerge with some lateral displacement, that's ok.

Agree. Another way to look at it is light is entering cloud from multiple directions and most of it comes back out

So if Rayleigh scattering is wavelength dependent, why isn't the sky violet? (My favorite class question so far this year).

I've heard this question posed before - when I first heard it my guess was that there's just less violet light emitted by the sun in the first place. But that turns out not to be it. I won't spoil it for the readers who might want to think about it some more. (And it'll make an interesting post too.)

As you note, the scattering is not isotropic, but I think you will find that there is a reasonably strong backward scattering component as well.

Precisely how would you manage to create a real fantastic audience regarding commenters to your website?