The End Is Not Near, But If An 'Insect Apocalypse' Ever Happens, How Would We Know?

Insects scuttle, chew and fly through the world around us. Humans rely on them to pollinate plants, prey on insects that we don’t get along with, and to be movers and shakers for Earth’s ecosystems. It’s hard to imagine a world without insects.

That’s why news reports in recent months warning of an “insect apocalypse” sparked widespread alarm. These articles, which were based on long-term insect collections and a review of past studies, suggested that people alive today will witness the indiscriminate extinction of insect-kind.

I study fungi that can be used to control harmful insects, such as pests that damage crops and mosquitoes that transmit malaria. In my world, reports of mass insect die-offs are big news. But while there clearly is reason to be concerned about certain insects, such as the endangered rusty patched bumble bee or the American burying beetle, in my view it isn’t yet possible to predict a looming insect apocalypse.

More than 1 million insects have been discovered and named, but many millions have yet to be described. It’s undeniable that Earth is becoming increasingly inhospitable to some insects – but nightmarish conditions for one may be heaven to another.

Put another way, there is no perfect environment for all insects. And human impacts on the environment, like climate change and land development, very well may hurt beneficial insects and help harmful ones.

Insects account for 75% of all the known species on Earth. What makes them so successful?

Around the world, entomologists are looking wistfully into empty nets, and car owners are increasingly unsettled by their pristine windshields. It does not take decades of data collection and a degree to notice that in a human lifetime, our teeming world teems less.

The first study to set off alarms was published in 2017 by entomologists in Germany, who reported that over 27 years the biomass of flying insects in their traps had declined by 75%. Another study from the Luquillo Long Term Ecological Research program site in the Puerto Rican rainforest reproduced an insect survey from the 1970s. It found that the biomass of arthropods – a large group of organisms that includes insects – had declined 10- to 60-fold in that time, and that lizards, frogs and birds that ate arthropods had also declined.

Underscoring this theme, in April 2019 two scholars published a review that synthesized over 70 reports of insect decline from around the world, and predicted mass insect extinctions within a human lifetime. They took a alarmist tone, and have been widely criticized for exaggerating their conclusions and selecting studies to review with the word “decline.”

Nonetheless, these researchers had no trouble finding studies to include in their review. Many scientists are currently analyzing the roles that climate change, land use, chemical pesticides and other factors have played in reported declines in many insect species. 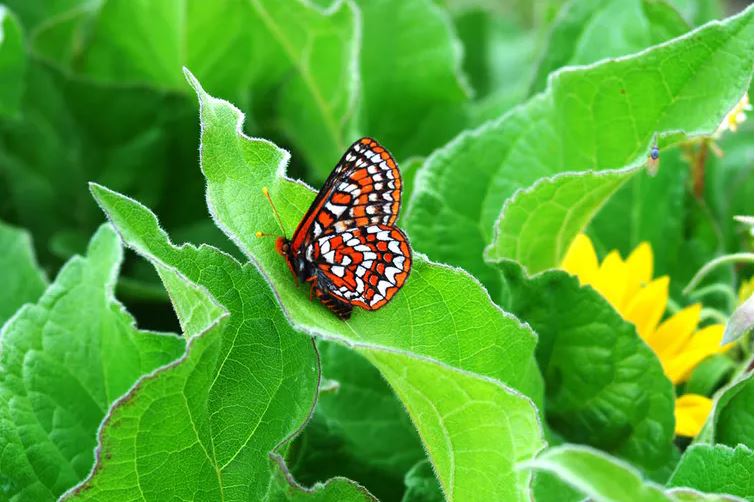 The Taylor’s checkerspot butterfly, once found throughout grasslands in the Pacific Northwest, was listed as endangered in 2013. The main cause is habitat loss, driven by development, tree encroachment and spread of invasive plants. USFWS/Ted Thomas, CC BY

The end is not near

These discussions are important, but they don’t mean an insect apocalypse is under way. Predicting insect decline is hard to do without a lot of effort and data.

To predict an apocalypse, entomologists worldwide will need to conduct careful large-scale studies that involve collecting, identifying and counting many different insects. There are very few insects for which scientists have enough data now to reliably predict how many individuals there will be from year to year, let alone confidently chart a decline in each species. Most of the insects for which this information exists are species that are important for agricultural or human health, such as managed honey bees or mosquitoes.

And human actions are shifting balances between insect species. As an example, the mosquitoes that are best at spreading pathogens that cause disease have evolved to thrive near us. Entomologists call them anthropophilic, which means they love people.

That love extends to human impacts on the land. Insects that flutter from flower to flower won’t be happy when developers bulldoze a meadow and scatter tires around, but human-biting mosquitoes will be buzzing with excitement.

What else is out there?

Entomologists are uniformly concerned about the fate of insects in today’s changing world. But I believe the responsible approach is to push back on fire-and-brimstone rhetoric until detailed, large-scale studies are completed. Until then, these same gaps in our knowledge also make it hard to rule out that significant declines in diverse insects are happening. These gaps must be filled to illuminate challenges that insects face, from the inconvenient to the apocalyptic.

When the majority of insects remain to be described, it’s hard to value them. But here’s one example: Insecticide use in pear groves in China’s Sichuan Province has caused such a decline in native pollinators that beekeepers will not lend their bees to these orchards. These farmers are forced to pollinate their trees by hand – an expensive and time-consuming process if you aren’t an insect.

Similarly, native natural enemies played invisible roles in slowing the spread of the invasive brown marmorated stink bug when it was introduced into Pennsylvania in the 1990s. They included wasps that lay their eggs inside of stink bug eggs, and predatory insects and spiders that eat stink bugs eggs for breakfast.

Pollination and predation are just the start. Some insects could be sources of new drugs or traditional dyes, while others inspire artists or just provide little moments of inimitable beauty.

With so many unanswered questions, it’s clear that there is a need for more funding for biodiversity research. It is no coincidence that recent studies reporting massive insect declines came from a Long-Term Ecological Research center that is publicly funded through the National Science Foundation and from a carefully curated collection made and maintained by entomologists.

This kind of work requires money, bold foresight and dedication to science over long periods of time. But it can produce insights into how our world is changing – and that knowledge will help us prepare for the future.

By Brian Lovett, PhD Candidate, University of Maryland. This article is republished from The Conversation under a Creative Commons license. Read the original article.

Natural climate solutions let nature do the hard work in the fight against climate change by restoring habitats such as forests and wetlands. This could absorb carbon dioxide from the atmosphere and help biodiversity thrive. Stephen Woroniecki – a PhD Researcher in Climate Change Adaptation from…

With a new infectious disease outbreak on our doorstep, we might ask ourselves: are we reacting to the coronavirus in a way that is proportional to the threat? The problem is that when it comes to infectious disease epidemics, we have a strong tendency to overreact emotionally and under-react…

The Yeast All Around Us

With people confined to their homes, there is more interest in home-baked bread than ever before. And that means a lot of people are making friends with yeast for the first time. I am a professor of hospitality management and a former chef, and I teach in my university’s fermentation science…
Advertisment