COVID-19 is caused by a coronavirus called SARS-CoV-2. Coronaviruses belong to a group of viruses that infect animals, from peacocks to whales. They’re named for the bulb-tipped spikes that project from the virus’s surface and give the appearance of a corona surrounding it.

SARS-CoV-2 is genetically very similar to other human respiratory coronaviruses, including SARS-CoV and MERS-CoV. However, the subtle genetic differences translate to significant differences in how readily a coronavirus infects people and how it makes them sick.

SARS-CoV-2 has all the same genetic equipment as the original SARS-CoV, which caused a global outbreak in 2003, but with around 6,000 mutations sprinkled around in the usual places where coronaviruses change. Think whole milk versus skim milk.

Compared to other human coronaviruses like MERS-CoV, which emerged in the Middle East in 2012, the new virus has customized versions of the same general equipment for invading cells and copying itself. However, SARS-CoV-2 has a totally different set of genes called accessories, which give this new virus a little advantage in specific situations. For example, MERS has a particular protein that shuts down a cell’s ability to sound the alarm about a viral intruder. SARS-CoV-2 has an unrelated gene with an as-yet unknown function in that position in its genome. Think cow milk versus almond milk.

How the virus infects

Every coronavirus infection starts with a virus particle, a spherical shell that protects a single long string of genetic material and inserts it into a human cell. The genetic material instructs the cell to make around 30 different parts of the virus, allowing the virus to reproduce. The cells that SARS-CoV-2 prefers to infect have a protein called ACE2 on the outside that is important for regulating blood pressure.

The infection begins when the long spike proteins that protrude from the virus particle latch on to the cell’s ACE2 protein. From that point, the spike transforms, unfolding and refolding itself using coiled spring-like parts that start out buried at the core of the spike. The reconfigured spike hooks into the cell and crashes the virus particle and cell together. This forms a channel where the string of viral genetic material can snake its way into the unsuspecting cell. 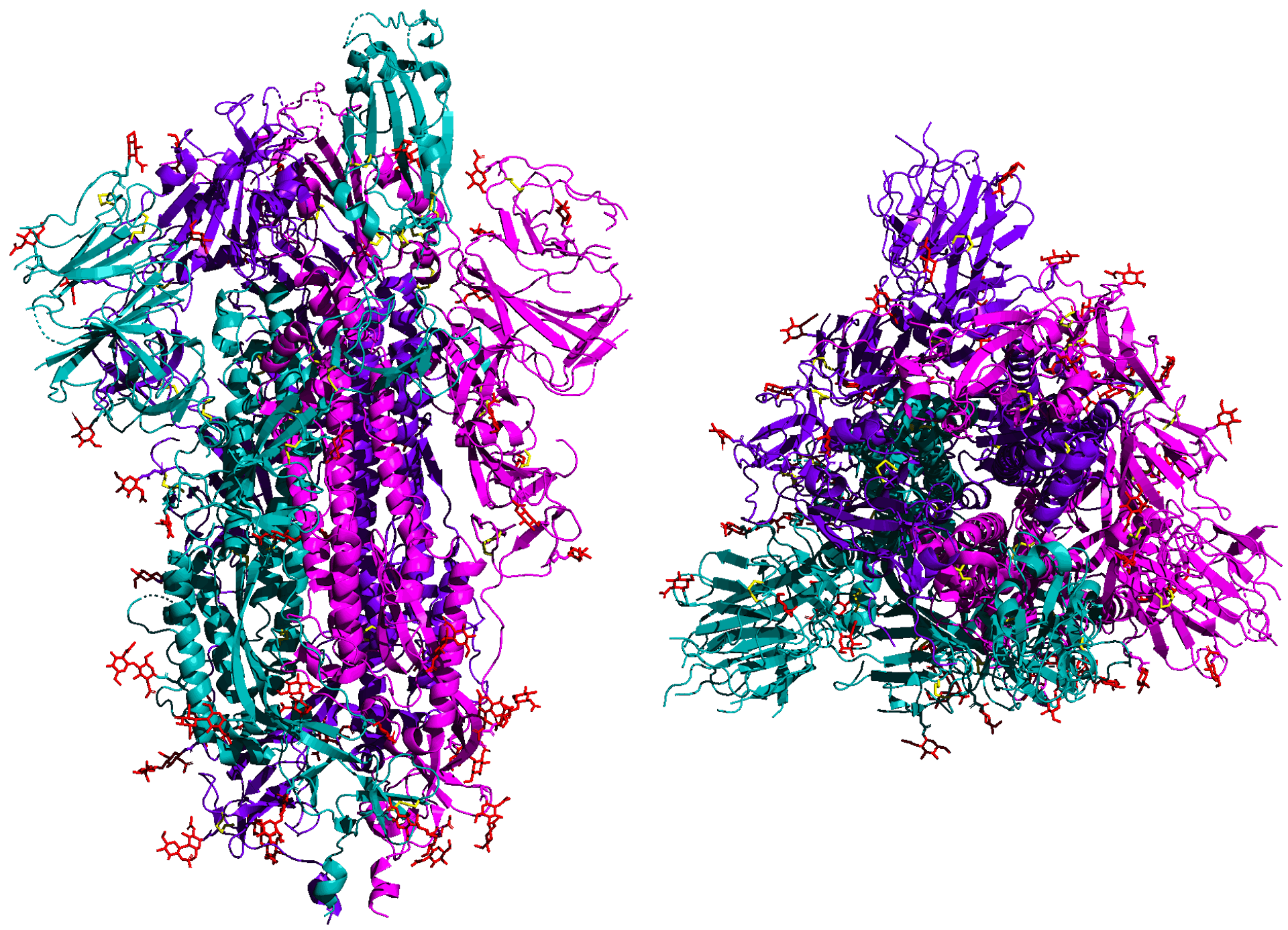 An illustration of the SARS-CoV-2 spike protein shown from the side (left) and top. The protein latches onto human lung cells. 5-HT2AR/Wikimedia

SARS-CoV-2 spreads from person to person by close contact. The Shincheonji Church outbreak in South Korea in February provides a good demonstration of how and how quickly SARS-CoV-2 spreads. It seems one or two people with the virus sat face to face very close to uninfected people for several minutes at a time in a crowded room. Within two weeks, several thousand people in the country were infected, and more than half of the infections at that point were attributable to the church. The outbreak got to a fast start because public health authorities were unaware of the potential outbreak and were not testing widely at that stage. Since then, authorities have worked hard and the number of new cases in South Korea has been falling steadily.

How the virus makes people sick

SARS-CoV-2 grows in type II lung cells, which secrete a soap-like substance that helps air slip deep into the lungs, and in cells lining the throat. As with SARS, most of the damage in COVID-19, the illness caused by the new coronavirus, is caused by the immune system carrying out a scorched earth defense to stop the virus from spreading. Millions of cells from the immune system invade the infected lung tissue and cause massive amounts of damage in the process of cleaning out the virus and any infected cells.

SARS-CoV-2 has a sliding scale of severity. Patients under age 10 seem to clear the virus easily, most people under 40 seem to bounce back quickly, but older people suffer from increasingly severe COVID-19. The ACE2 protein that SARS-CoV-2 uses as a door to enter cells is also important for regulating blood pressure, and it does not do its job when the virus gets there first. This is one reason COVID-19 is more severe in people with high blood pressure.

SARS-CoV-2 is more severe than seasonal influenza in part because it has many more ways to stop cells from calling out to the immune system for help. For example, one way that cells try to respond to infection is by making interferon, the alarm signaling protein. SARS-CoV-2 blocks this by a combination of camouflage, snipping off protein markers from the cell that serve as distress beacons and finally shredding any anti-viral instructions that the cell makes before they can be used. As a result, COVID-19 can fester for a month, causing a little damage each day, while most people get over a case of the flu in less than a week.

At present, the transmission rate of SARS-CoV-2 is a little higher than that of the pandemic 2009 H1N1 influenza virus, but SARS-CoV-2 is at least 10 times as deadly. From the data that is available now, COVID-19 seems a lot like severe acute respiratory syndrome (SARS), though it’s less likely than SARS to be severe.

There are still many mysteries about this virus and coronaviruses in general – the nuances of how they cause disease, the way they interact with proteins inside the cell, the structure of the proteins that form new viruses and how some of the basic virus-copying machinery works.

Another unknown is how COVID-19 will respond to changes in the seasons. The flu tends to follow cold weather, both in the northern and southern hemispheres. Some other human coronaviruses spread at a low level year-round, but then seem to peak in the spring. But nobody really knows for sure why these viruses vary with the seasons.

What is amazing so far in this outbreak is all the good science that has come out so quickly. The research community learned about structures of the virus spike protein and the ACE2 protein with part of the spike protein attached just a little over a month after the genetic sequence became available. I spent my first 20 or so years working on coronaviruses without the benefit of either. This bodes well for better understanding, preventing and treating COVID-19.

By Benjamin Neuman, Professor of Biology, Texas A&M University-Texarkana. This article is republished from The Conversation under a Creative Commons license. Read the original article.