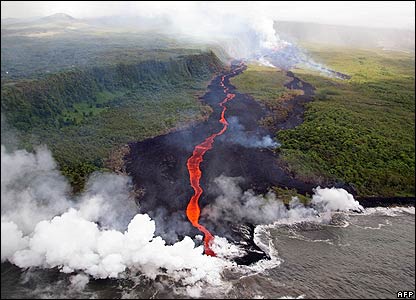 Piton de la Fournaise is a large shield volcano associated with the Reunion Island Hotspot. The volcano has frequent eruptions, mostly in the form of effusive lava flows of basalt, similar to the Hawaiian volcanoes. This could be an interesting new eruption because the initial eruptions suggest this is a flank eruption outside the caldera, but this might just be a product of a mistaken report.

*Update 9/21/08:Â Thanks to Anthony for noticing that Reunion Island is in the IndianÂ Ocean, not the Pacific. Sorry about misplacing the island!

that some crazy shit

Grazie for todayâs entry, honestly, can you become a author for wikipedia because the current pages hosted there for our hobby is dross. I donât agree exactly with it but I agree with it on the most part and I wholeheartedly applaud your effort in putting it so ably.

For all photos, I think I'm gonna start lifting up my shirt, showing off my gut, and demanding to be called The Fatuation.

When you're may still over the obstacle: apprehend your darling headset, president all the way down to a Most excellent Use and inquire of which will connect them to the Zune after that some iPod and see what kind might sound better to you, and that can outlook sets you beam over. And then that you are going to learn that is best for you.

I'm pretty sure Luke would cool his thrusters for Princess Leia if he knew they used to be wombmates.

A trained expert inspector can only detect visible signs of bed bugs in a room. To find activity inside walls, baseboards, even under carpets, a room would have to otherwise be stripped down beyond the bare walls! A dogâs keen sense of smell can detect bed bugs even inside walls. We as a pest control company have those professionally trained dogs in our team to fight the war against these pests.

Hey your site looks really weird in Firefox on my laptop with Ubuntu .

Hey, I canât watch your website appropriately within just Opera, We truly we imagine you look into correcting this.

Things you mentioned made . Yet, consider this, what if you offered a little more? I mean, I dont tend to teach ways to run your website, however what if you added extra content which could get people's notice? Simply as a online video or maybe a photo or maybe two to have people interested regarding what you are talking about.

remarkable! credit for that answers, i'm going to preserve it in the mind next time

Wow, this was very interesting to read. Have you ever considered submitting articles to magazines?

The support fact was key. As soon as the MLM potential buyers have been purchased, was there somehow aid in case of need? Most had e-mail support, a few had live cellphone support, and a few had reside real-time message support. There were webpages that offered no support, and should you had a confront together with your MLM leads, then good luck.

Think about wherever you work. Isn't it true that the boss (or company) is raking in the large bucks out of the cash YOU are generating for the company? Possibly you are not in sales. You still contribute one thing of rate to the company. In case you didn't, they would not pay you! Your paycheck is a reflection of that value. Even if you work in sales, for a nonprofit, or in the service industry, somebody somewhere is earning money and you are contributing to that effort. If they weren't generating money, the company would collapse.