There are something over 10,000 species of birds (thus the name of the famous blog). Of these, just under 600 are in very very serious trouble, some to the extent that we are not sure if they exist, others are so rare that we know they exist but there are no good photographs of them, others are merely very likely to go extinct. There are patterns to this rarity, having to do with what threatens birds on one hand and what makes certain birds vulnerable on the other, but the range of birds that are threatened, in terms of size, shape, kind of bird, habitat, etc. represents birds pretty generally. It is not just obscure frog-like rainforest birds of Borneo that are threatened. Chance are you live in a zone where there are bird species that have gone extinct over the last century, or are about to go extinct over coming decades, including birds that you will never see unless you are very very lucky. 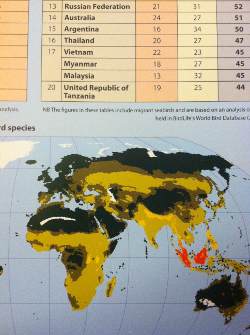 is one of those books that crosses over from coffee table (it is bigish and quite beautiful) to field guide (it is species-level informative) to conservation science (it is about the rares, and thus often most threatened). Birdlife International has been dealing with rare and endangered birds for years, and this organization has produced a number of products bringing attention to bird conservation, including various books and calendars and such. This particular volume is their finest product ever, and is quite amazing. The World's Rarest Birds

covers just over 500 of the aforementioned rare and endangered birds in more detail than most bird related references that you've got in your house now.

It is a rather interesting concept if you think about it. The average bird ID book, or more detailed reference book, may address about 500 birds, using a variety of graphical techniques, text, and other resources. The World's Rarest Birds

is a larger format book with about 360 pages. Fitting information about 500 birds into a somewhat larger than average bird book allows for a lot of detail. 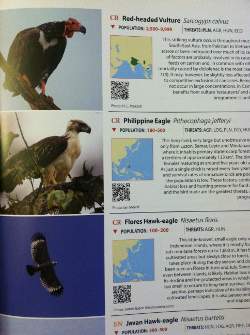 Much of the book is like any other bird book, but with species that you'd give up your best binoculars to see.

The first several chapters of the book included detailed, interesting, informative, and beautifully laid out information. These chapters cover the geography of endangerment, the kinds of threats, bird-human interaction, how the process of keeping track of endangered and rare birds works, and so on.

Then the book is divided into seven regions covering the entire planet. Each region has a long introductory section followed by something that looks a lot like a field guide covering each and every one of the rare birds in each area.

The book is educational, promotes conservation, looks nice, but at the same time is a reference source for those rare birds. This, somewhat morbidly but worthy of note, allows The World's Rarest Birds

to serve a special role in certain birders libraries. If you have bird guides and references for several different parts of the world, there may be a number of species missing because they are just too rare or unknown. The World's Rarest Birds

is like that stuff you put in your gas tank to add oomph to your engine, but with birdbooks. A regional library of references will suddenly have high octane information on some of the least known species. 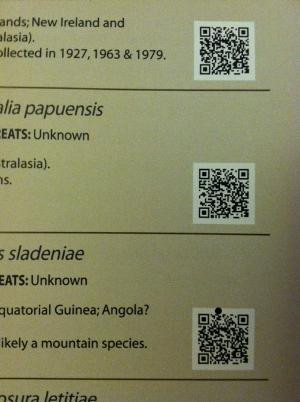 QR codes bring you to the Birlife International database entry for that bird.

Birdlife International actually commissioned many of the photographs in the book, and many, possibly most, of the species of concern are under some degree of study or investigation. Or, at least, new information is emerging now and then to supplement what is in the printed volume. In order to keep up with the latest information about your favorite rare bird, you can use the QR codes that go with each entry. Scan the QR code and you'l be brought to a BLI web page with the most current info. If you know how to use QR codes and stuff.

This book is for any birder, but I have a specific suggestion. Do you have a birder in the house or family or as a friend with a birthday coming up in the next two months? Get them this book. It's new, they don't have it yet, and they'll like it.