So, how has the Atlantic hurricane season shaping up so far?

According to data accumulated by the National Weather Service, as shown (with added items) here ... 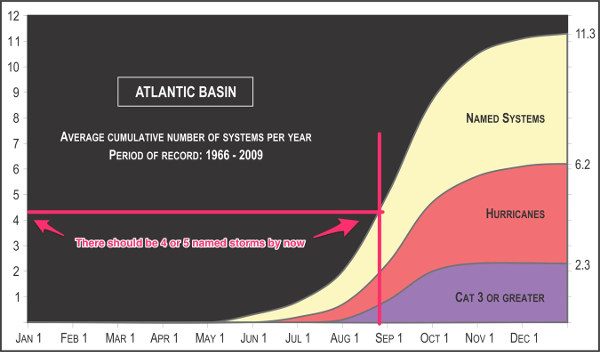 ... we should have had about four or five named storms at this point in the season. Since numbers for this time of year are small, variation is large, so this is not too meaningful but it can give us an idea.

So far, we have had these storms in the Atlantic:

The next storm will be named Fernand, and it may be forming as we speak: 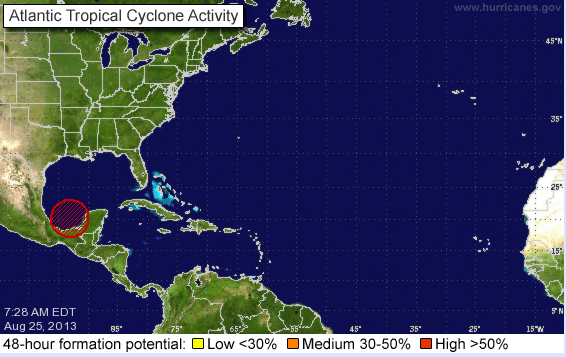 There is a 60% chance that this stormy blob will turn into a named tropical storm over the next few days. Also there are several interesting looking proto-stormy-blobs between the west coast of Africa and the Caribbean that have promise.

This possible named tropical storm, which would be Fernand, is aimed at Mexico.

UPDATE: The stormy blob is now officially a tropical depression, and there is a hurricane hunter heading for it right now. Expect this to become a named storm later today. Then, it will cross the coast in Mexico and turn back into a stormy blog. But for just a short while, very likely (but maybe not), Fernad will exist.

UPDATE: Yup, Fernand formed, is now over land in Mexico, and will dissipate.

So, we have had five named storms. By the end of the month, we'll probably have six. And that is about right.

From Intellicast, we have a picture of the immediate and near future jet stream: 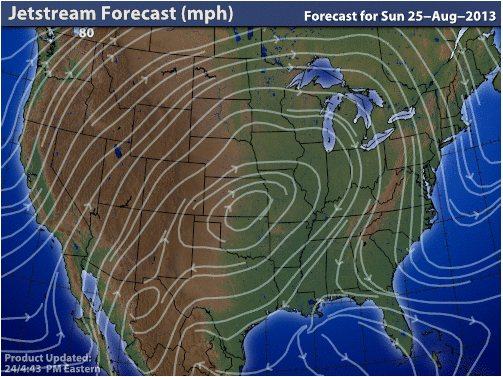 The arrows-bearing white lines curving up over the rockies, across the upper midwest, and down along the east coast indicate a highly convoluted wave in the jet stream. This convoluted pattern is most likely the result of the Arctic being warmed (via global warming). This reduces the gradient of heat from the equator to the pole. A steeper gradient would result in a straighter jet stream. When you get a bunch of convolutions (waves) in the jet stream, owing to complicated meteorological math stuff, the waves tend to stall in place. Areas "under the curve" (like, right now, the middle of the US) get big high pressure systems that move warm air to the north, for several days at a time. A result of this would be a big giant heat bubble as shown in the following GIF I copied from Paul Douglas's blog:

Which, in turn, is likely to seriously exacerbate drought conditions in the region, as shown on this map from US Drought Monitor:

So, really, "Tropical Weather" isn't just Atlantic Hurricanes, but heat waves at places such as the Minnesota State Fair: