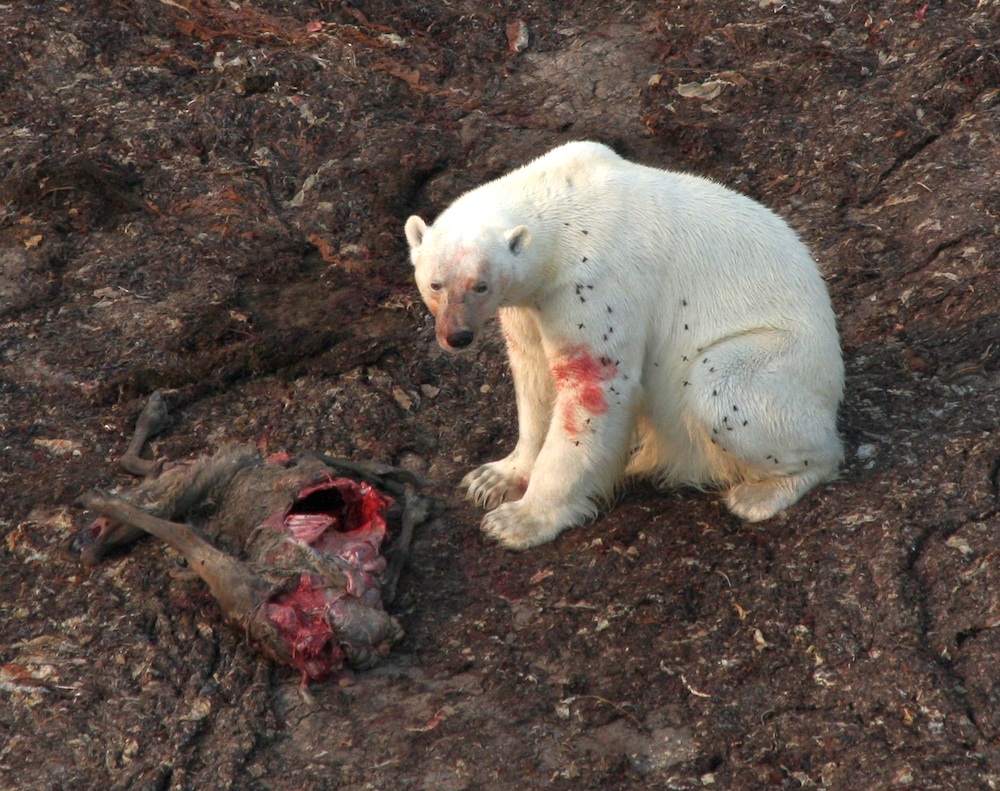 A recent study published in Ecology and Evolution shows that polar bear diets are more adaptable than previously thought.

Researchers Linda Gormezano and Robert Rockwell analyzed the feces from polar bears (Ursus maritimus) in the western Hudson Bay area and compared their findings to a similar report from 40 years ago. The study was conducted during the ice-free season when polar bears usually hunt seals to build their annual fat reserves. Since ice is melting more rapidly, less time is available for the bears to hunt their preferred prey. What is a polar bear to do? Become less selective.

The recent analyses of polar bear feces show the animals are consuming increasingly available land resources due to the changing climate. Bird remains were found in 29% of the samples analyzed, comprised mainly of snow geese whereas eggs were found in 4.4% of the samples. The most commonly found mammalian remains were caribou (10.1%), seals (6.5%) and other polar bears (5.1%). They also discovered the occasional, but rare, remains of small mammals (rodents and hares). Polar bear feces also contained significant vegetation mainly in the form of grasses and marine algae.

Requiem for the polar bear

Well, for what it's worth, the U.S. Geological Survey has confirmed what just about every independent observer of the polar bear has been saying for years: time's running out. According to the executive summary of the service's initial findings as part of its investigation into whether to add Ursus…

It's not just Alaskan governors who have a problem with treating polar bears as a threatened species. For some reason, a lot of people who just can't bring themselves to accept the idea that we're heating up the planet seem to have it in for poor old Ursus maritimus. A year ago, the journal…

Why should we care about the polar bear?

Throughout most of the world humans have exterminated carnivores in order to keep their places of habitation safe, and while large carnivores still exist in patches we have a sort of "You keep to your side, I'll keep to my side," sort of attitude towards them. The problem, however, is that we keep…

It has been said that polar bears would not be able to adapt in changing ice conditions--especially with the rising presence of greenhouse gas--this article gives a bit of hope that the skeptics were wrong. Polar bears are trying their best to adapt to the rapidly changing conditions, but it still important to make a change to reduce the melting of ice glaciers.

Many suggests that polar bears are going to become extinct in the near future. This article gives hope in a way that polar bears may be able to survive. According to Charles Darwin's evolution theory of natural selection, the elimination of the insufficient. Considering the polar bears are already adapting to the current environment, hopefully evolution will be able to occur over time and save their species.