Life in a lake must not be that stressful 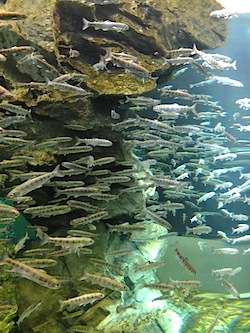 Image of Biwa salmon from the Lake Biwa Museum (http://www.lbm.go.jp/english/exhibits/aquarium.html)

It is not surprising that Biwa salmon (image above), a subspecies of Oncorhyncus masou, do not adapt to seawater very well after having been landlocked in Lake Biwa, Japan for the last 500,000 years or so.  Researchers from Hokkaido University and Shiga Prefecture Fishery Experiment Station in Japan wanted to know what caused the salmon to lose their ability to thrive in salt water. In a new paper published in the American Journal of Physiology they compared the sodium/potassium pumps in the gills of Biwa salmon with other fish from the same species that continue to migrate from seawater to fresh water to spawn. This pump is very important in the regulation of water and electrolytes in salmon and other salt water fish and helps to limit the amount of salt the animals take in from the surrounding water.

Interestingly, Nakajima et al. found that the activity of the sodium/potassium pump increased in fish that traveled between seawater and fresh water to spawn, whereas the activity was low in Biwa salmon. When they treated Biwa salmon with growth hormone and cortisol, a stress hormone, they observed an increase in the activity of the pump. These findings are really interesting because they show that seawater adaptability in Biwa salmon can be regulated by stress hormones. Masu salmon migrating from seawater to fresh water also increase circulating cortisol concentrations during migration, whereas Biwa salmon do not increase cortisol when migrating downstream.

Life in a lake must not be that stressful...or at least not as stressful as adapting to fresh or seawater!