Bone-house wasps protect their young by building walls made of ant carcasses. Image from: Merten Ehmig

A new species of spider wasp that protect their young with walls made of ant carcasses has been discovered in the forests of China. Dr. Michael Staab from the University of Freiburg discovered the new species which he named Deuteragenia ossarium meaning "bone-house wasp" since the wasps reminded him of the ossuaries in Europe with structures decorated from human bones. 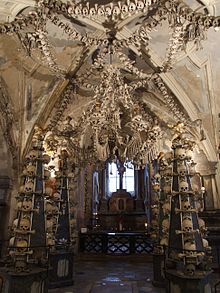 Sedlec Ossuary in the Czech Republic. Image from Wikipedia.

Similar to the ossuaries, the bone-house wasps use alive or dead ants to create plugs that help seal off their nests from predators. Dr. Staab believes the pungent smell of the ant carcasses may help to ward off predators or camouflage the nest. The jet black wasps look unlike any other species of wasp currently known.