A recent study published in the American Journal of Physiology - Regulatory, Integrative and Comparative Physiology presents evidence that altering the sex of just the fat body in heads of fruit flies (Drosophila) causes them to have stress responses similar to the opposite sex.

Males and females vary in their response to stress. It turns out that this difference is not unique to mammals as male and female fruit flies also show similar variations. In fruit flies this is thought to be due to differences in the neuronal circuits between the sexes, which may also explain some of the variability in mammals.

Each cell of a fruit fly basically "chooses" whether to be male or female based on the ratio of specific genes within the cells. In the new study, researchers used this information to modify the sex determination pathway in just the fat body in the head of Drosophila resulting in females that developed as pseudo-males and males that developed as pseudo-females. They chose the fat body because of its importance in regulating body size and energy stores. In addition, the fat body that surrounds the head is thought to be important in modulating behavior. The results of their research supported this notion as behavioral and physiological responses to stress (alterations in fat body volume, changes in enzyme activities, heart rate, patterns of movement) were indeed altered when the sex of the fat body was switched. 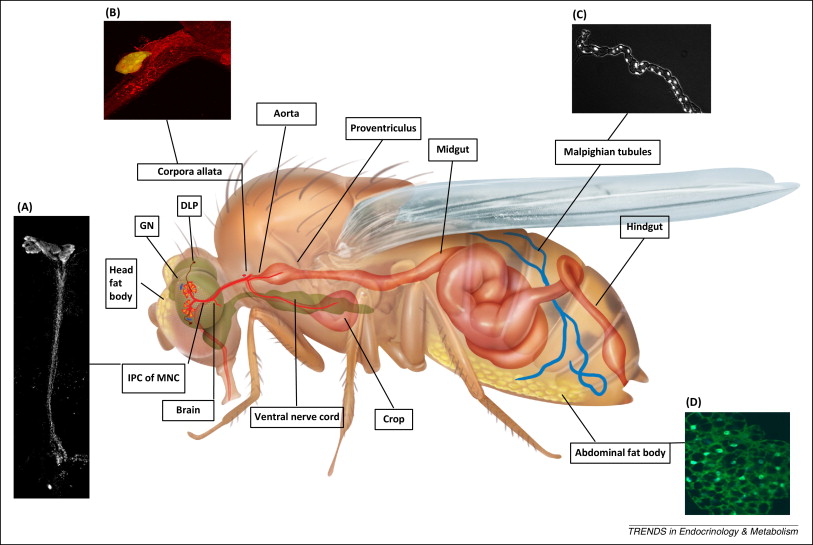 Image of Drosophila anatomy from Tatar, Post and Yu, 2014.