The Myth of the Fat Burning Zone

When many people set out to exercise, they do so with the primary goal of losing fat mass. There is much advice floating around about how to optimize or maximize fat loss during exercise; one of the most commonly touted is that of the fat burning zone. Essentially, it is suggested that when performing aerobic exercise (walking, jogging, swimming, etc.) one should work at a fairly low intensity - the fat burning zone - to augment fat oxidation and thus fat loss (pictured above). The fat burning zone target exercise intensity varies from source to source but is approximately 50-60% of your maximal heart rate (maximal heart rate calculated simply as 220 - your age [with plenty room for error]).

The main error with the fat burning zone premise emanates from a basic
misunderstanding of absolute (total) versus relative (proportional)
values. One of the best ways I have found to explain this concept when I
lecture is to use a car analogy. I ask the following question: When
comparing 2 vehicles, a Honda S2000 and a Mustang GT, which is more
'powerful'? Some background info is needed here - the Honda S2000 has a
2.2 litre engine and produces a total of 237 horsepower (hp) while the
Mustang GT has a 4.6 litre engine and produces 300 hp. To the above
question, most students will simply (and correctly) answer that the
Mustang GT is the more 'powerful' car as it generates more hp (300 vs.
237) - thus the Mustang is in an absolute sense more powerful. On the
other hand, the Honda generates more hp PER litre (107hp/L vs 37.5hp/L) -
hence, it is more 'powerful' in a relative sense.
The same type of thinking can be applied to fat oxidation at different
intensities of aerobic exercise. It is absolutely true that in a
relative sense, the lower the exercise intensity the greater the
reliance on fat as a substrate for energy. As the exercise intensity
increases, the relative proportion of fat oxidation decreases while that
of carbohydrate increases. However, the value of interest to anyone
attempting to maximize fat loss is not what percentage of energy comes
from fat during the exercise (relative), but how much fat is oxidized
(absolute). This is where the fat burning zone breaks down.
The following graph from my lecture which is based on actual data
illustrates this point. While exercising at 60% of maximal heart rate
(fat burning zone) the proportional use of fat is highest (63% - white
numbers inside each red bar) while the absolute number of calories of
fat burned is actually lower than that achieved at higher intensities
(70, 75, and 80%) - much like comparing the Honda to the Mustang. In
fact, although while exercising at 80% of maximal heart rate the
relative use of fat is much lower (33% vs 63%) the absolute amount of
fat burned is still greater (by approximately 10 calories). 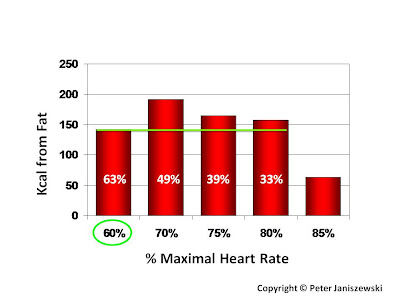 A 50 year old man exercising at different
intensities for 30 minutes. Values inside each red bar indicate the
relative proportion of fat to total energy expenditure. Circled in green
is the intensity most commonly referred to as the 'fat burning zone'.

Another reason the fat burning zone is inaccurate is because during
more intense exercise TOTAL CALORIC expenditure is much higher. Since
the body can for the most part inter-convert one macronutrient to
another (only exception being fat - carbohydrate conversion), a calorie
is a calorie regardless of the source (fat, carbohydrate, protein).
Thus, total caloric expenditure must be the focus if fat loss is the end
goal.

Of course, there is an obvious tradeoff between exercise intensity and
duration - you can walk for hours but sprint for mere seconds before
collapsing. Hence, each individual must adjust both variables to
maximize caloric expenditure - if you can jog rather than walk, your
workout can be half the duration to expend the same amount of calories.
Peter Janiszewski
Tags
Obesity Research
fat burning zone

Very good article. Congrats. I have a question: I've read that a calorie from a carbohydrate is not the same as one coming from protein or fat (I guess it has to do with the glycemic index) but in your article you state a calorie is a calorie regardless of the source... Could you explain a little bit more on this... Thank you for your attention. I look forward to reading more articles.

In this post, when Peter refers to the "source" of the calorie, I believe he means within the body. So he means that whether you're burning fat or carbs that are already stored within your body, it doesn't really matter.

In terms of caloric intake it gets a bit more confusing. As Yoni Freedhoff would say, calories are the "currency" of body weight, but certain types of calories may have different effects on metabolism, as you described with high GI carbs. So for example high glycemic index carbs can cause an insulin spike, and I believe they also influence leptin levels, in ways that protein or low GI carbs would not.

Unfortunately I'm not the ideal person to answer this question since my work tends to focus on the exercise side of the equation. For an extremely detailed explanation of fructose's impact on metabolism, check out this video by Dr Bob Lustig.

Great post Peter! I will use this to point out my argument to fellow exercisers. I often get people who tell me the "treadmill" makes them exercise at lower intensities because they're burning more fat and so they feel that they don't need to go any further.

Thank you for the link to the video.

I notice, however, that you only went as far as examiing the data for fat oxidized during the exercise itself, vs. afterwards (i.e., EPOC - which is also related to intensity). Thus, the graph - while correct - doesn't really tell the whole story.

Years ago, when I asked the personal trainer at my gym why I wasn't losing weight, he said that I needed to aim for the fat-burning zone. Apparently, I was exercising too much to lose weight (?!?) Then he tried to sell me an expensive heart-rate wrist monitor.

It seems like every time I read your blog, I learn something that makes me throw up my hands and roll my eyes. (That, is about something I've been told elsewhere).

Thanks for sharing with us the actual science of fitness and obesity, and not just the sales pitches of diet plans and fitness trainers. :)

Elly, I wondered about that too. Can you elaborate?

Perhaps, even though the relative proportion of calories from fat used during exercise is lower with high-intensity exercise, the calories burned in the hours after exercise are from fat?

I like to do fairly short, fairly high intensity exercise. No way I'm jogging slowly for an hour, that's boring - I'm gonna do 5k in 22 minutes. I like to think that this sets me up for hours of higher than normal fat burning afterwards, even if all I'm doing is wandering around the house, watching TV or even sleeping. Am I kidding myself?

Always good to see more myth-busting out there.

One clarifying question, though, that I've had trouble finding an answer for:

What if you don't have very much fat to lose (but still some), and are more concerned with maintaining your muscle tissue? Since your body is finding a smaller relative share of calories from fat, does that mean it's also cannibalizing more muscle to fuel that greater absolute amount of energy expenditure?

I can see an argument for saying that even if low intensity is really inefficient in terms of burning a given amount of fat, it might be worth it to make sure you're not burning a lot of other stuff (like muscle) that you *don't* want to get rid of.

On another point, these data add more support for the idea of having standing desks at work, or otherwise standing while doing activities you used to sit for: it certainly doesn't increase your heart rate very much, but it does use up a lot more energy through the day, so it might be a maximally efficient way to burn a large absolute amount of fat over time.

While its true the total number of calories burned increases, and even the calories burned from fat increase, there is not much appreciable gain from stepping up the intensity, mainly because whatever calories burned that are not fat, must come from carbohydrate, and as previously mention fats cannot be converted into carbohydrates, therefore any carbohydrate calories burned, must inevitably be eaten back again to fill muscle glycogen , either as carbohydrate, or through gluconeogenisis, while the same is not true of fat. Weight loss comes not from the calories burned during the exercise, but rather the physiological adaptations that occur from the exercise having a cumulative effect on metabolism. i.e. increased insulin sensitivity, increased reliance on fat for fuel upregulation of enzymes and growth hormone secretion, and effects on leptin, combined of course with a healthy diet.

Sorry for the double post, but i forgot something in my last article, mainly that the difference between the two intensities may be a mere 10 fat calories, even after total caloric expenditure has gone up by 50 or so calories, the extra 40 are coming from burned glycogen. At a higher intensity 85%+ the stress is much higher on the body, and bouts of exercise at his intensity are quite fatiguing. For long slow cardio I like to stay at or below 70% as that is the "spot" where I can feel my body starting to switch over to carbs more.

I get such good ideas here. The "fat-burning zone" is one of the many misconceptions that seem to be passed from one exerciser to another. The explanation for the myth is a combination of misinterpreted biochemistry and exercise physiology, inadequate education of many workers in the fitness industry, and a magazine culture that often favors sensationalism over scientific fact.