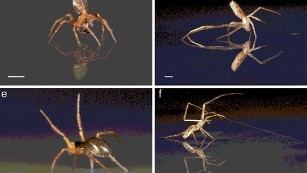 Research published July 3 in the journal BMC Evolutionary Biology supports the idea that some species of spiders can catch the wind to "sail" across bodies of water, which they suggest might be why certain spiders seem to be all over the world. While some spiders were already know to catch the breeze to travel by air relatively short distances, and some are known to be aquatic, the researchers in this study were interested in examining just how well spiders could actually walk on water. So, they collected 325 wild spiders and dropped them on water to see what would happen. All of the spiders began to float and many stretched their legs upwards like sails. In contrast, if exposed to a breeze while standing on a dry surface, they dropped low to the ground.