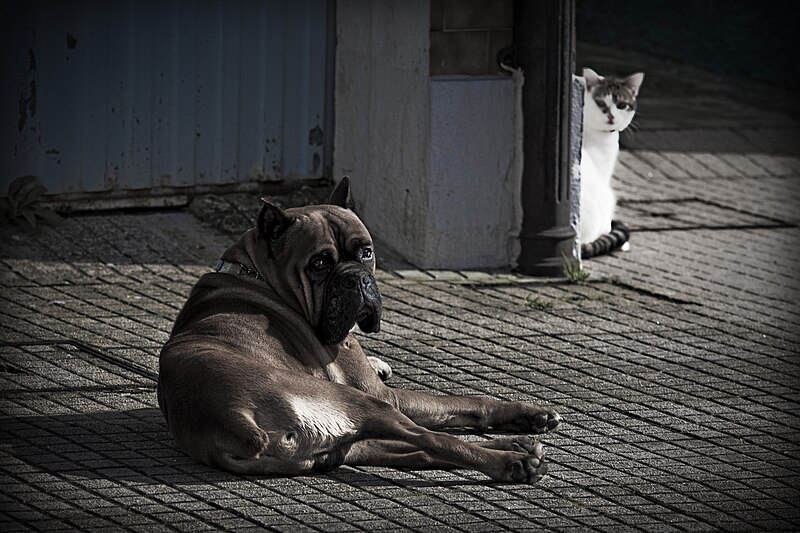 By Noel Feans (originally posted to Flickr as Watch your back!) [CC BY 2.0 (http://creativecommons.org/licenses/by/2.0)], via Wikimedia Commons

New research suggests that cats may have played a role in the extinction of about 40 species of wild dogs by simply out-hunting them and therefore consuming more food.

The study noted that dogs first appeared in North America around 40 million years ago and by 22 million years ago there were over 30 species of wild dogs. Cats arrived from Asia around 20 million years after dogs appeared. The arrival of cats was followed by decreased diversity of dogs. Dr. Daniele Silvestro was quoted in a press release from the University of Gothenburg saying, “We usually expect climate changes to play an overwhelming role in the evolution of biodiversity. Instead, competition among different carnivore species proved to be even more important for canids.” According to the study, only 9 species of wild dogs are found in North America today.

Obtaining food is a major contributor to the evolutionary success of carnivores. According to a quote from Dr. Silvestro in the Oregonian, "The cats have retractable claws which they only pull out when they catch their prey. This means they don't wear them out and they can keep them sharp. But the dogs can't do this, so they are at a disadvantage to the cats in an ambush situation."

Silvestro D, Antonelli A, Salamin N, Quental T B: The role of clade competition in the diversification of North American canids. Proceedings of the National Academy of Science USA (2015). The full article is available free of charge at the following link: http://www.pnas.org/content/early/2015/06/23/1502803112.abstract

Interesting. It also seems that this might be one of the many reasons dogs and humans are so well bonded. If the dogs can't compete with cats in the wild, tending to starve, the dogs might turn to humans for a reliable food source.