...in alligators at least. 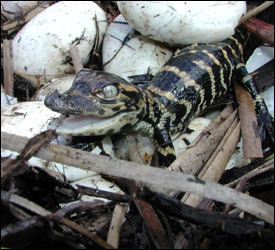 Image of alligator eggs and hatchling from National Park Service.

Researchers from the University of Manchester, University of North Texas - Denton, and the Rockefeller Wildlife Refuge - Grand Chenier, Louisiana teamed up to explore the effects of exposure to low oxygen on embryonic American alligators (Alligator mississippiensis). Alligator eggs are often laid in nests where oxygen concentrations can reportedly vary between 11-20% (21% is normal atmospheric levels). This is really important as issues related to embryonic development could continue to affect animals throughout their adult lives as well.

The results of the study were recently published in the American Journal of Physiology - Regulatory, Integrative and Comparative Physiology. The researchers found that embryos exposed to low oxygen were smaller and had larger hearts even into their juvenile years. In addition, the mitochondria of juvenile alligators that had been exposed to low oxygen were more efficient at using oxygen. These adaptations may help the animals adjust well to low oxygen environments.

In contrast, a recent review article written by Patterson and Zhang suggests that human embryos exposed to low oxygen do not fare as well as alligators. While a period of hypoxia is important in normal development, prolonged exposure of embryos to low oxygen can result abnormal heart structure and function. In fact, it is thought that these embryos may be more prone to heart disease as adults.