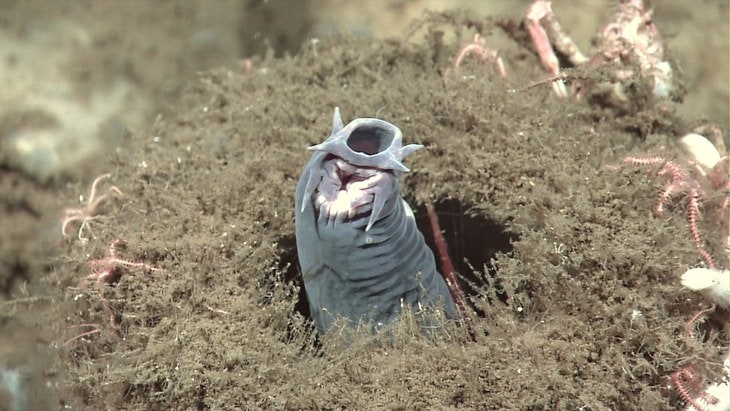 Pacific hagfish (Eptatretus stoutii), aka "slime eels", are primitive fish that occupy burrows on the ocean floor. Like earthworms, they have 5 hearts. They have no true eyes, no jaws, nor do they have a stomach. They locate their meals through great senses of smell and touch. In addition to small invertebrates, they are known for consuming carrion that fall to the ocean floor. By consume, I mean burrow into the decomposing carcasses and eating them from the inside out. Ew. Given their dietary habits, it is no surprise they are regularly exposed to little to no oxygen and high ammonia levels as they burrow into carcasses. While some fish suffer from brain swelling, coma and even death with exposure to high ammonia levels, hagfish are remarkably tolerant of ammonia. A recent study published in the American Journal of Physiology - Regulatory, Integrative and Comparative Physiology, discovered what makes hagfish so tolerant. As it turns out, hagfish can get rid of excess ammonia by excreting it through special transporters in their gills and skin.

That's not all that comes from their skin. Like Slimer, from the Ghostbusters, hagfish have glands on their bodies that produce slime to help them escape predators. It is thought that the slime can gum up their attacker's gills. Hagfish slime contains thousands of very skinny, and very strong, long protein threads. Some researchers are exploring how these threads may be woven to produce strong fabrics or even artificial tissues.

I recommend Steinbeck's little-known "Sea of Cortez", where he collects marine specimens with Ed Ricketts. In the catalog he sent to his customers, Ricketts wrote, "Available in some quantities, delightful and beautiful hagfish." I did not even know the book existed til I was 40.