Since January, I've been covering Oxford's animal rights movement, and the response of local scientists, primarily through the organization Pro-Test. This post from the archives describes a particularly informative Pro-Test event. 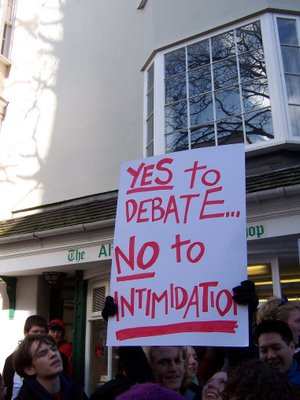 (26 May 2006) On Monday, May 22nd, an audience of about 100 people joined the pro-research organization Pro-Test at a public meeting in the Oxford Town Hall, and in standard fashion The Scientific Activist was there to report all about it. The purpose of the meeting was to make the case for animal research from a variety of perspectives, get feedback from the crowd, and publicize Pro-Test and its upcoming march on June 3rd. The meeting began with statements from each of the scheduled speakers and concluded with Q&A from the audience. Although the event was scheduled from 7 to 9 pm, the meeting was extended an extra half hour because participation was so high. Although Pro-Test was founded in response to the prominent animal rights movement that has become a fact of life over the last couple of years in Oxford, the event focused much more on what the group is for, rather than what it's against. The event appeared to be a success, allowing Pro-Test to continue the impressive momentum it has already built up.

Just as the later questions and comments demonstrated that the audience was incredibly diverse, the speakers also addressed animal research from a refreshingly wide range of perspectives. After an opening statement by Oxford student and Pro-Test committee member Alistair Fraser, who would MC the event, Pro-Test's 16-year-old founder Laurie Pycroft discussed how his organization came to be in January of this year. Although he "never thought it would grow to this," he was happy to be giving a voice to Oxford's "silent majority" that supports animal research and the continued construction of the new biomedical research center that has engendered the ire of the animal rights protesters.

As the organizers of the event struggled with microphone troubles, Dr. Andrew McMichael--a self-described "medical doctor who turned into a scientist about 30 years ago" and current Director of the Medical Research Council Human Immunology Unit at Oxford--made his case for the need for animal research, focusing specifically on HIV/AIDS. He described the important findings regarding HIV that have already been made using animal studies, including the proof that HIV in fact causes AIDS, which opened up the way for more detailed research and the eventual creation of about 20 different antiviral drugs to treat HIV (before this, he said that there only three antiviral drugs available for all viral diseases combined). As the need for an HIV vaccine becomes increasingly clear, McMichael described just how difficult such a feat is, with an effective clinical trial needing about 20,000 people in a high risk population and taking about five to ten years. Thus, animal research will play a necessary role in narrowing down the potential vaccines that are promising enough to merit such an investment.

As the Pro-Test committee solved the microphone problems (by turning off the sound system), the event continued with Dr. Ken Fleming, the head of Oxford's Medical Sciences Division. "We're living now in one of the golden ages of medicine," he stated, noting the particular power of the Human Genome Project. "If we're going to deliver the promise of the Human Genome Project, we need animal research." He stressed the importance of the new research center for carrying on Oxford's long legacy of impressive medical research, including the development of penicillin into a usable drug. "We should have been more vocal in the past," he said, regretting that it has taken such tremendous efforts by Pro-Test to finally give people the courage to speak out against the intimidation of the animal rights movement.

Next up was Niki Shisler, an author who was there to give what she called a "personal perspective." As the mother of a child with a form of muscular dystrophy, she said "this for me is not a philosophical issue. This is personal." She called for people to stand up for the medical scientists who currently work so hard in the face of constant protests to do their work for the benefit of society.

Shisler was followed by Vicky Cowell, the Director of Patient's Voice for Medical Advance. She began by discussing her daughter, who has grew up battling cystic fibrosis and is now a pro-research activist. She then described the work of her organization and how the tactics of the animal rights protesters have driven much of its work underground, having the ironic effect of making her organization have to present its annual award for animal welfare completely secretly.

Christopher Bickerton of Pro-Test spoke next and gave more insight on the founding and basic principles of Pro-Test. He particularly stressed the early explicit decision to be primarily pro-research rather than just against animal rights protesters. He also discussed Pro-Test's recent publicity stunt of buying 10 shares of stock in GlaxoSmithKline, one of the organizations hardest hit by animal rights extremists. Although the purpose was to send the message that "animal research isn't some dirty little secret," I found the move rather worrying. If anything, it further confuses basic science with industry, a widespread problem undermining support for the sciences in general, and it could be construed as lending credence to the mistaken idea some animal rights activists have that scientists defend animal research because they are concerned about protecting their careers and making tons of money (as I roll on the floor laughing). Still, Bickerton ended on a high note with a perfect sound bite quote. "It's only by winning the public over to science that we can be optimistic about the future of science in the UK." I can't argue with that.

During Bickerton's address, the final speaker of the event arrived, having been held up at a prior event. As usual, though, Dr. Evan Harris--Oxford's Liberal Democrat Member of Parliament--did not disappoint, opening with a Woody Allen joke and continuing on into what I decided was the most interesting speech of the night. He spoke of the need to balance freedom of expression with the need to make sure the science happens. As he challenged what I would agree is a fairly harsh injunction that Oxford is currently seeking against its animal rights protesters, Andrew McMichael and Ken Fleming were visibly upset. Still he continued, saying that we can't "give The Establishment too much." After describing what he presented as the political parties' fairly dismal records on supporting animal research, he discussed a few of his own proposals. He stated that every press release coming from the Department of Health should clearly state what animal research was used to make the currently publicized medical advance possible. More controversially, he also described a current proposal to require drug containers to state whether animal research was used to develop that medicine. Although the pharmaceutical industry is very strongly against this proposal, Harris believes it's important to counteract the constant exposure we have to "not tested on animals" labels. Even if people then choose not to take the medicines, this would only be them exercising their right to informed consent. Plus, this puts the onus on the animal rights protesters to decide how dedicated they really are to their cause.

So, this guy takes on "The Establishment" and the pharmaceutical industry while also fighting for science in the face of animal rights protesters. Not bad. I'd sure as hell vote for him if I were eligible to.

After Harris spoke, the meeting was then opened up to Q&A from the floor. The ensuing discussion was usually congenial, although sometimes hostile, as people spoke anywhere from fully in support of animal research, to one person who was completely against, with everyone else somewhere in between. Despite these differences, almost everyone seemed to agree that animal research was important and deserved our open support in the face of constant action by animal rights protesters. I stood up and addressed my concerns about Pro-Test too closely confusing science with industry. I received a satisfactory response from Christopher Bickerton, who stated that Pro-Test did differentiate between science and capitalism and that it was not trying to comment on capitalism by purchasing the GlaxoSmithKline shares.

After the events of the evening, I was able to return to my own research in the lab (yes, it's sad but true that being in the lab until around midnight has become an increasingly common phenomenon) much better informed about animal research and its diverse contingency of backers and feeling fairly optimistic about the future of science in the UK. Now, if only we could follow this example back in the US, maybe we could better fend off the incursion of intelligent design and creationism into our classrooms or end the ban on federal funding for embryonic stem cell research. If not, then it's hard for me to be so optimistic about science in the US.

How does Pro-Test respond to concerns about animal well-being? Some animal testing is necessary, but you can't just say, "Humans are more important than anything else out there".

That's a good question, and Pro-Test, just like the scientists who perform animal research, heavily stresses animal well-being. For more details, check out my previous coverage of Pro-Test, found here and here.

This Is a Very Dumb Poll

April 14, 2010
Actually, I should say that this is a very dumb analysis of a poll. The New York Times is really promoting its new NYT/CBS poll right now; as I write this, the top headline on the Times' homepage reads "Poll Finds Tea Party Backers Wealthier and More Educated." When I first saw that headline and…

April 8, 2010
Today, the UCLA chapter of Pro-Test held its second rally in support of animal research. With as many as 400 or so supporters in attendance, it looks like it was another great success! Here are a couple of early reports on the event: Tom Holder of Speaking of Research: On a beautiful sunny day in…

April 7, 2010
This is pretty neat: scientists have apparently discovered the first example of truly anaerobic animal life (i.e. an animal that can survive in the absence of oxygen). This isn't some sort of fuzzy critter, though; instead, these are tiny (less than 1 mm in length) animals that were found on the…

ScienceBlogs Traffic Is Off the Hook!

April 6, 2010
Web traffic to ScienceBlogs.com is up about 50% over last year (and has been growing at that rate since the site's inception in 2006). That's pretty impressive! Check out the stats here: SBRelease20040610.pdf (Hat tip to DrugMonkey.)