Those of you who keep up with your news may have seen this headline on CNN last week: Star Explodes Halfway Across Universe. What they're talking about is a Gamma-Ray Burst, which was so bright that, despite being 7.5 billion light years (that's 2.3 Gpc) away, it was still visible on Earth with the naked eye. From the article:

This is the sort of thing that the SWIFT satellite was designed to detect, pinpoint, and then tell Earth-based telescopes, "point over there, quick!" Here's what they saw: 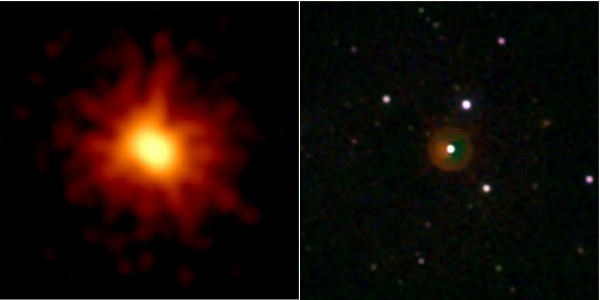 The Polish team Pi of the Sky also made a composite time-lapse animation of the burst going off, which is pretty neat:

But the big question I want to know is what the heck caused it? According to the SWIFT page on NASA's website, it is now thought that most Gamma-Ray Bursts are giant supernovae or hypernovae, with the Earth fortuitously aligned with one of the two jets that shoot out from them. But it could also have been merging neutron stars or black holes (if it were, this is the type of thing that LIGO or LISA would be looking for), or something more complex. Supernovae are the standard explanation, but it is by no means a convincing one. Listen to the press release:

Analysis of GRB 080319B is just getting underway, so astronomers don't know why this burst and its afterglow were so bright. One possibility is the burst was more energetic than others, perhaps because of the mass, spin, or magnetic field of the progenitor star or its jet. Or perhaps it concentrated its energy in a narrow jet that was aimed directly at Earth.

Could be, except that as far as we know (with maybe one exception), supernova explosions are pretty damned spherical. This is a problem (as of 2005, my last contact with the supernova people) with supernova simulations vs. observations -- the simulations predict an asymmetric explosions, but the observations don't give that. So what are Gamma-Ray Bursts? As even wikipedia will tell you, we still aren't sure. Any bright ideas?