But if you teach an Ape to fish…

What the heck has this world come to? All over the internet, this picture of an Orangutan trying to fish with a stick has been shown: 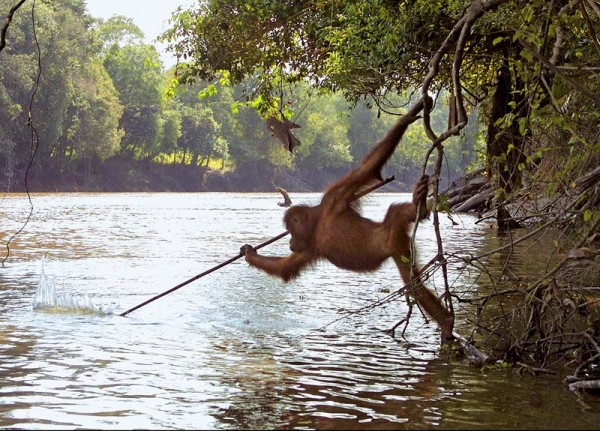 But what's the story behind this? Is this evidence that humans are not unique among the Great Apes as tool-users?

Not quite. According to the Daily Mail, this is an orangutan that had extensive exposure to humans; this jungle setting is actually where they reintroduce orangutans into the wild from zoos, private homes and (yikes) butcher shops. This particular orangutan actually doesn't successfully know how to fish; this was something he copied from nearby humans who tangled a stick in with their fishing lines to reel in fish. He would go to the fishermen's site and steal some of their fish using a stick while they were away. Here he (unsuccessfully) attempts to apply this technique on his own. It doesn't work without the fishermen and their fishing lines, though.

What's very interesting about this is that the oldest tools are about 2.5 million years old. What were they? Weapons. This corresponds with the same time, according to the fossil record, that human ancestors started rapidly getting smarter, increasing their cranial capacity tremendously. What does this mean? That when we started hunting, in addition to gathering, we evolved into smarter beings. Look at the following skull sizes & shapes:

How neat is that; the addition of extra protein to our diets corresponds with the exact time period that we started evolving into smarter beings! Does this story sound familiar? And I can't help but think of that when I see this great ape trying to supplement his (mostly) fruit-based diet with some protein; good for you!

So wait, are you trying to tell me that there is more evidence that the world is more than six thousand years old besides the tree you wrote about.
This might be too much for my protein enriched brain to handle.

One small quibble, though. The first tools weren't so much weapons used for hunting as they were scrapers and choppers used for scavenging. But hey, protein is protein, and a diet with meat means fewer calories spent digesting your food, and more calories spent thinking about how to get more food.