The Last 100 Years: 1987, a Supernova, and the luckiest physicist ever

By the 1980s, our view of the Universe was pretty close to what it is today. We had confirmed the Big Bang Theory and even had some understanding of what must've caused the Big Bang. There were some mysteries around, such as dark matter, the age of the Universe, and the solar neutrino problem, but all in all, we were on pretty solid ground.

One of the things astronomers had been waiting for was a supernova to go off in our galaxy. We expect about one per century in our galaxy, and we hadn't seen one since 1604! It's 2009 now, and we still haven't seen one, but in 1987, we got closer than any other time since 1604. Take a look at our nearby galactic neighborhood: 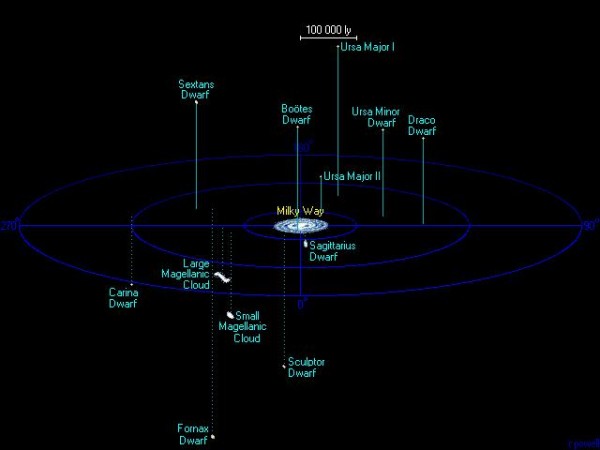 While our Milky Way is certainly the most dominant thing until we get out to Andromeda, more than 2 million light years away, many of these dwarfs and clouds actually have a lot going on. The Large Magellanic Cloud (LMC), for example, has over 10 billion stars in it! And in 1987, something fascinating happened over there in the Tarantula Nebula: 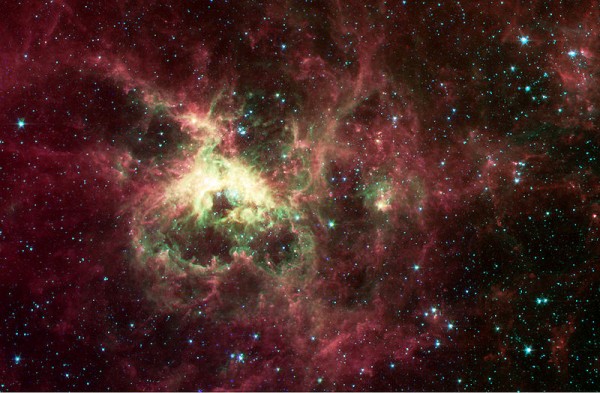 In the outskirts of this nebula, one of the more massive stars in this cloud simply ran out of fuel, collapsed, and created a giant supernova explosion. Can you spot the supernova in this Hubble Space Telescope picture? 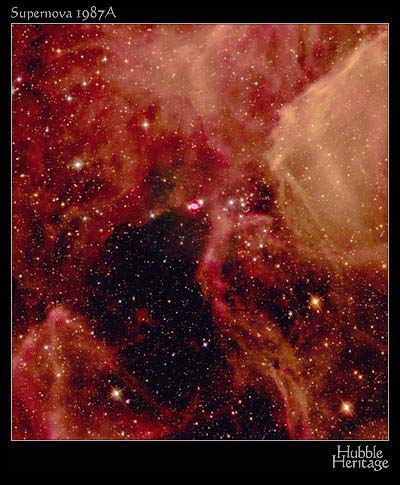 Look in the middle. There's one small part that's brighter than the rest. I can't zoom in on the image above, but the Hubble Space Telescope, thankfully, did. Let's take a look at what it sees: 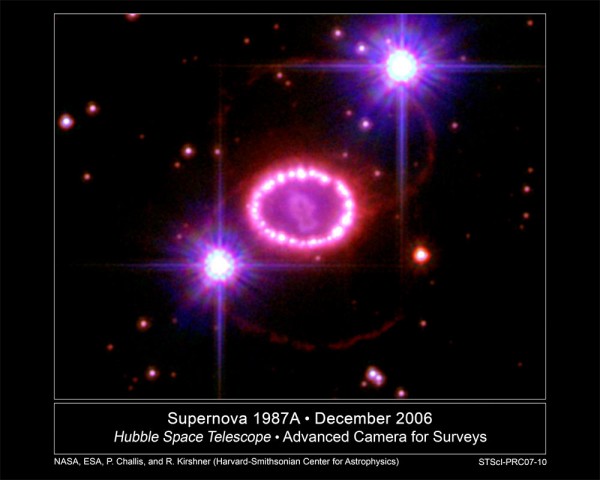 (And click here for the full size shot.) Now, this was interesting to people who studied stars, supernovae, nuclear physics, and many others for all sorts of reasons. But sometimes, the greatest discovery is the one you weren't planning on.

Let me explain, and let me do it by taking you over to Kamioka, Japan. 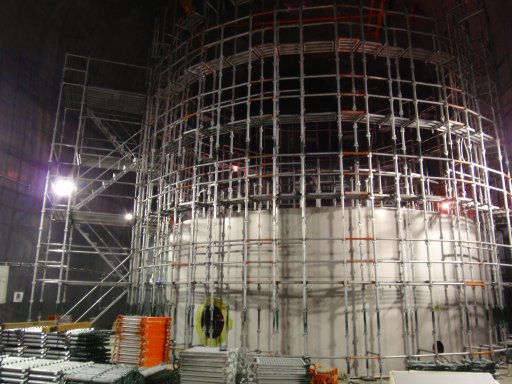 What's this? It's a huge, underground tank being constructed! There was a popular theory in the early 1980s that, as one of its consequences, predicted that the proton would decay! In order to look for this, the Japanese, led by Masatoshi Koshiba, build a huge tank of water with detectors all around the edge to look for decaying protons. The experiment was called Kamiokande, for the Kamioka Nucleon Decay Experiment. In fact, here's a modern-day picture of the current detector at Kamioka: 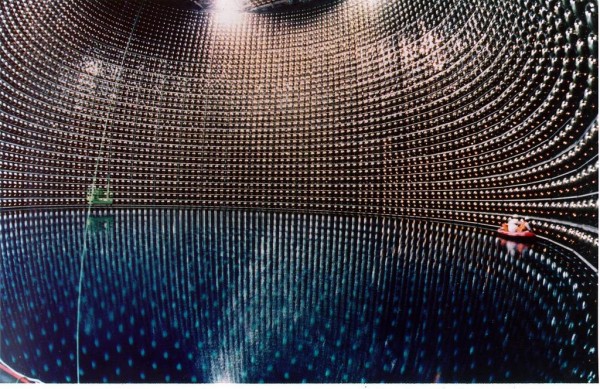 In 1987, it had 3000 metric tons of water inside of it, or about 10^34 protons. Well, this detector was going for awhile, and it didn't see any decaying protons. You watch 10^34 protons for a year, none of them decay, and what do you conclude? That protons live for at least 10^34 years! (This is incredibly long, considering that the Universe is only about 10^10 years old!) But in 1987, the supernova above went off in the LMC. It was the first time that any event this destructive and energetic occurred so close to us since the dawn of modern technology. Kamiokande happened to be running, and you know what happened? 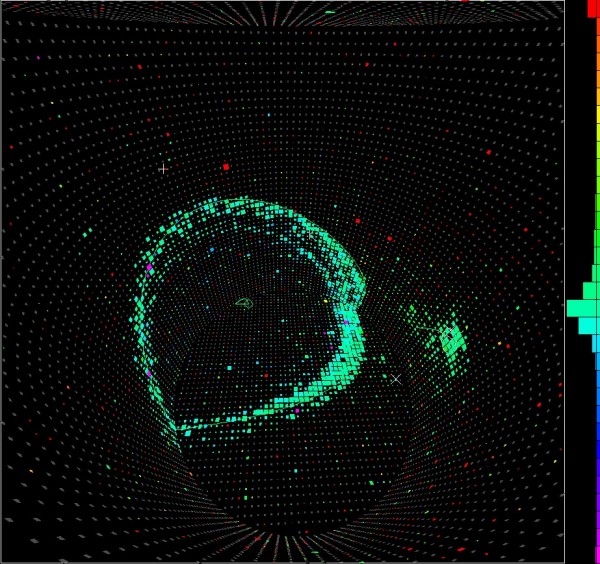 The detector went off! Not just with one event like this, but with 11 events, all coming from the direction of this supernova! You see, this Nucleon Decay Experiment also functioned as a Neutrino Detector Experiment. Koshiba and his team had just detected the first astrophysical neutrinos from anything other than the Sun. 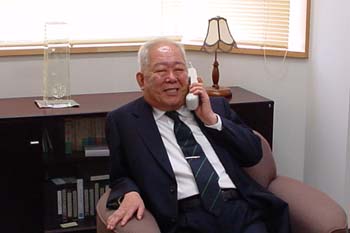 For this discovery and the work that grew out of it, Koshiba won the Nobel Prize in 2002. This work led directly to the discovery of neutrino oscillations and the fact that neutrinos have a mass, which is pretty profound for particle physics. But Koshiba has a claim to infamy as well as a claim to fame. Just one year prior to winning the Nobel Prize, Koshiba caused the greatest science disaster in Japanese history, where thousands of these detectors around the edge exploded in a chain reaction. This was about a 30 million dollar mistake, and Koshiba was the one blamed. 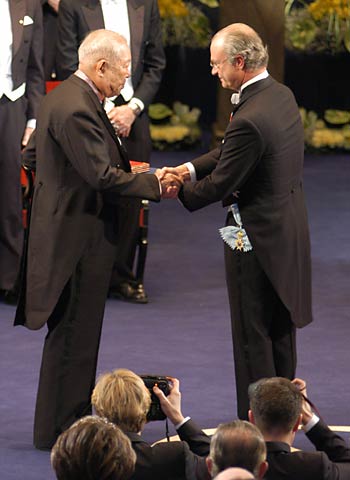 So you see, you can make a groundbreaking discovery, change our view of the laws of nature forever, win a Nobel Prize, and still do one of the dumbest things in history. Sometimes, it's better to be lucky than good, and in Koshiba's case, he was in the right place with the right equipment at the right time.

Thanks for the catch on the million/billion; I'll change that one right out! As for the must've, what we've identified is a set of conditions that need to be put in place. That's the "must", but you're right that inflation is only a "may". We could have something that isn't inflation that gives the same conditions; we just don't know of another theory that does this.

Say, what did he do to cause the disaster?

He didn't do anything really. The problem was that the detector is made up of photomultiplier tubes - glass tubes with an internal vacuum. The ones on the bottom of the tank are under 40 m of water - or 4 atmospheres of pressure. One of these tubes had a small crack which wasn't observed during construction, and subsequently imploded. Unfortunately this implosion set up an outgoing pressure wave which took out the tubes next to it...and so on...it was an impressive chain reaction...shows what happens when your quality assurance program fails.

Newton's G cannot be calculated, the Standard Model arrives massless. Supersymmetry's partners refuse to appear, protons do not decay, the Higgs mechanism does not reveal its vector boson. Supergravity, lattice and loop quantum gravity, and above all string and M-theory predict nothing.

I enjoy reading all your "100 years" posts, but this one is my favorite. thanks.

...should have mentioned above...in any case, the Kamioka detector - called Super-Kamiokande - is back, better than ever and ready for use in the T2K experiment that is currently being built in Japan.

I can't even imagine the numbers and the space you were talking about. Universe is exciting and so interesting. Sometimes I wondering about working in the observatory and watching stars and someday watch the supernova with my own eyes. Ahhh, now go back to work.

Was reading up on the superkamiokand detector on wikipedia and found this nugget that I would appreciate someone explaining to me.

Why does light travel faster in water?

And it's pretty crappy, to be honest. Maybe I'll explain it next week?

That would be nice Ethan, would surely have to be easier to understand than that link.

This is just a fabulous blog.

Light doesn't travel faster in water than it does in a vacuum, it actually travels more slowly - that's why stuff can go faster than it in materials (but not in vacuum). Shorn of all the maths the reason is that when light travels in a material it doesn't just go from point to point, rather it is continuously absorbed and remitted by all the atoms in the material (this is known as scattering). This continual scattering is what slows the light down, as it is interacting with the material all the time.

why super-Kamiokande (SK) reconstruction is shown for SN1987A detection? Kamiokande is totally different from SK; it is even in the different location (~30m away). The cavern used for Kamiokande is now used for an experiment called kamLAND which confirmed neutrino oscillation and performed a precise measurement of one of mixing parameters.

SK is for atmospheric neutrinos as its main concern when it was built.

What a load of CRAP!

The LMC is outside of the Milky Way which itself is at least 100,000 light years across. For an event to take place outside the Milky Way and for that event to be detected here on Earth, that event needs to travel to earth which will at the very least take a minimum of 100,000 years from now so how did this Idiot manage to detect nutrinos from that said event????

Neutrinos travel at near the speed of light. Hence the neutrinos (as well as photons) from the LMC supernova 1987A were emitted about 157,000 years ago.