"I think it's one of the scars in our culture that we have too high an opinion of ourselves. We align ourselves with the angels instead of the higher primates." -Angela Carter

When I'm getting clear nights, sometimes I'll wake up in the middle of them, and just go and look outside; the allure of the sky is too much. It reminds me of a Sufjan Stevens song,

He Woke Me Up Again.
During the winters in Portland, that's -- to put it mildly -- a rare occurrence. But this morning, something almost made up for it. I came across the best Flash Solar System app I've ever seen over at dynamicdiagrams.com. 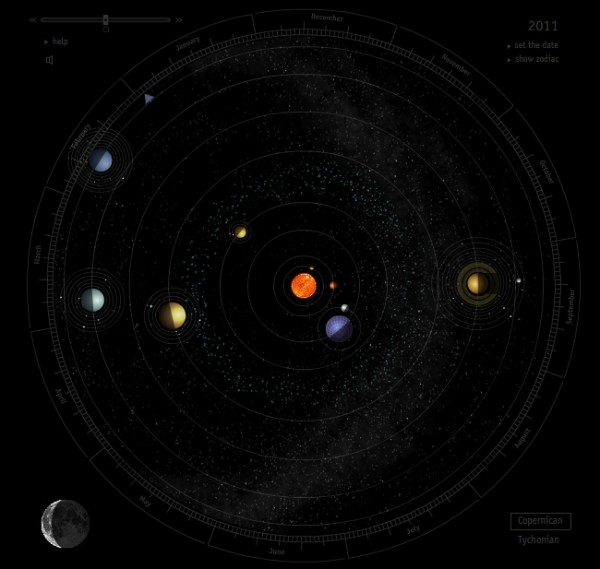 Screenshots all mine, taken from playing with the app.

You can run it forwards or backwards, show or hide the phases of the Moon, or -- as a neat trick -- switch to a Tychonian, or Earth-centered, view of our Solar System, which allows you to trace out the apparent paths of the planets as seen from Earth! 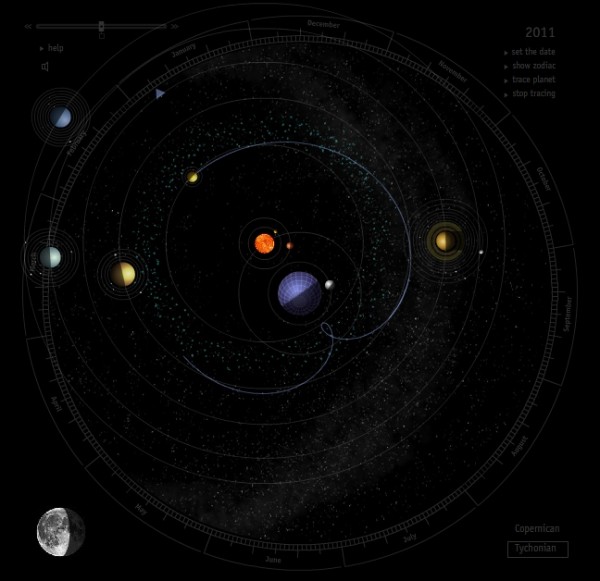 Another neat thing? I thought it would be fun to look for planetary alignments. After all, people have been claiming that all sorts of bizarre things will happen on December 21st, 2012. Let's just skip to that date! 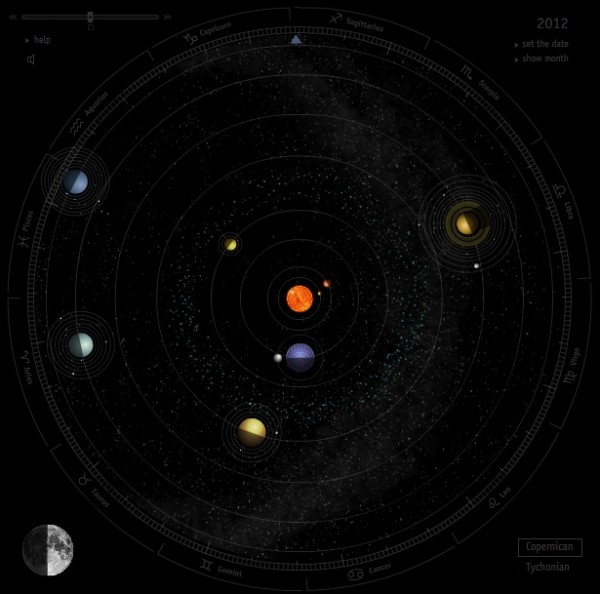 And as you can see, it's just another day in the life of our Solar System.

But I couldn't just say "the planets don't align" and be satisfied. I had to go and play around until I found a time where an unusual number of the planets actually do align. 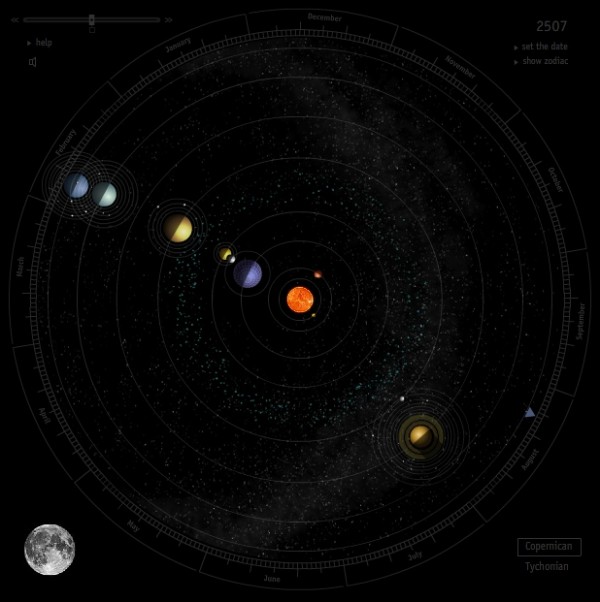 And here it is: August 24th, 2507! The full Moon, Mars, Jupiter, Uranus, and Neptune all appear within just a couple of degrees of one another in the night sky. If I had gotten Saturn in there as well, that would have been the best alignment possible! (Because you can never have Venus or Mercury align with the full Moon.)

This one was even worth switching to a Tychonian view. 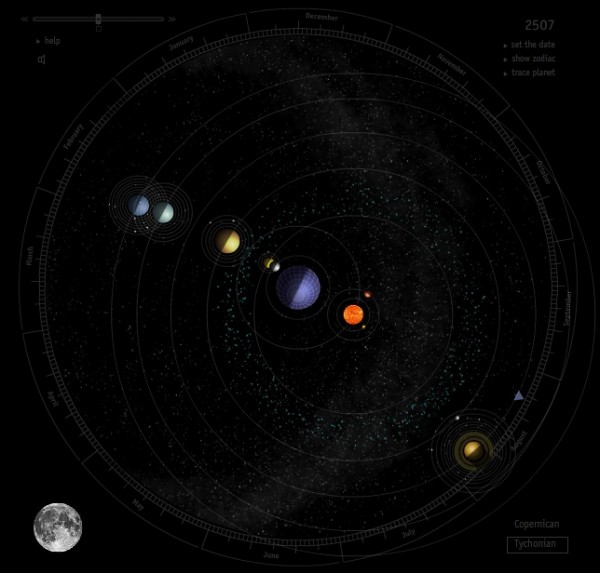 Can any of you find out how far ahead you'd have to go to get all the outer planets, including Saturn, to line up with the full Moon? Can any of you find a better alignment of more planets than this, perhaps even occurring within our lifetimes?

In any case, whether you have fun playing around with this app or not, hope you have a spectacular weekend!

My comment has nothing to do with this post, although that app is some time-wasting fun. I was hoping you were going to do a post on the Betelgeuse thing -- not so much for the "two sun" hoopla, but because I was hoping for some explanation of how one measures whether a star is "about to" go supernova. If it were truly imminent (as in, more imminent than "the next million years or so"), would astronomers pick up on that before it was visible to the naked eye? And if so, are we talking about very short warning (kind of like earthquake early warning systems) or something longer?

I really enjoy your blog!

Ethan (and other people)

This is a GREAT orrery application! For fun, I was plugging in my birthday and decided to see when the solar system returns to that exact same alignment as it did back in 1981 on my birthday. Unfortunately, I had to give up around the year 33950, having several close matches, but no exact ones. With our solar system and its predicable orbits, how long does it take for the solar system to repeat a pattern. I once heard something like 26,000 years or so, but I have not been able to find a formula or any sort of demonstration. Does anyone have any facts on this?

Water tanks to be cleaned at least once a year, and said creating a good business opportunity for the business area, we want to talk about possibilities of a successful franchise business.
Marti clean storage company founded in 1993 in Ankara, Turkey's oldest firmalarÄ±ndan.Hatta company in this field, TSE's first and only company in Turkey that the water tank temizliÄi'nde belirtiliyor.Firma 's 3-dealers have var.Åirket the company says they are looking dealers, the franchise fee is for any etmediklerinide says.
Istanbul, Bursa, Izmir, Adana, Mersin, dense residential areas, such as plans to give the franchise dealers.
A large number of water running in the first place to establish a cleaning company clean gerekmiyor.Zaten Marti Depo'nun main center, the demands of different cities the next cleaning equipment and the necessary elements required yÃ¶nlendiriyor.Onlara supply dealers making.

I give up! Why can't Venus or Mercury align with the full moon?

@5, Hint: think about where the moon has to be, to be "full" as seen from earth. Further hint: Go to the orrery, step through the animation and note the moon's position, when full, relative to the earth, venus, and mercury. 8-)

More on Mercury, Venus and the full moon...
You'll never see Mercury or Venus riding high in the night sky, regardless of the phase of the moon.
I don't think Ethan said that they can't align at all (in the Copernican sense). It's more that you won't see it as an alignment from the night side of Earth.

[Saves app as a bookmark. Thanks Ethan.]

All of Neptune's moons are orbiting in prograde! What about Triton?

"Water tanks to be cleaned at least once a year, and said creating a good business opportunity for the business area, we want to talk about possibilities of a successful franchise business.
Marti clean storage company founded in 1993 in Ankara, Turkey's oldest firmalarÄ±ndan.Hatta company in this field, TSE's first and only company in Turkey that the water tank temizliÄi'nde belirtiliyor.Firma 's 3-dealers have var.Åirket the company says they are looking dealers, the franchise fee is for any etmediklerinide says.
Istanbul, Bursa, Izmir, Adana, Mersin, dense residential areas, such as plans to give the franchise dealers.
A large number of water running in the first place to establish a cleaning company clean gerekmiyor.Zaten Marti Depo'nun main center, the demands of different cities the next cleaning equipment and the necessary elements required yÃ¶nlendiriyor.Onlara supply dealers making."

Is this a hiden terrorist transmission?!

July of 2850 was as close as I could get and its far from close. I wonder what the closest to a perfect line up we could get if we ran a computer simulation for the next 5 billion years.

Hey Ethan, What's up with the Islamic cat bull%^&*. I thought *I* was irrelevant sometimes, but this stuff takes the cake.

Actually, todays date is the most interesting one I could find. The planets and Sun (except for Saturn) make a kind of 'V' shape with the earth at the vetex.