One of the best graphic novels I've ever read is Watchmen, created by Alan Moore, Dave Gibbons and John Higgins. (Decent movie, too.) One of the things that struck me most about it is how fatalistic and, in many ways, hopeless it all seems. To set the mood this week, I give you Ben Harper's melancholic song,

Widow Of A Living Man.
With a slew of well-developed, major characters, a case can be made for any number of them as either the most heroic or villainous; in my case, I'll simply come out and say that -- for me -- the most compelling was Rorschach. 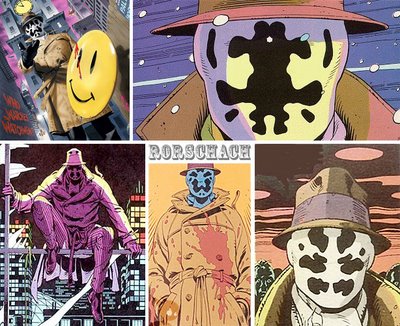 With an ever-shifting pattern of ink blots on his mask, modeled after the famous ink blot test, Rorschach was for me emblematic of the shifting moods, advantages and disadvantages we feel run through our lives.

Plus, he's a gigantic badass. 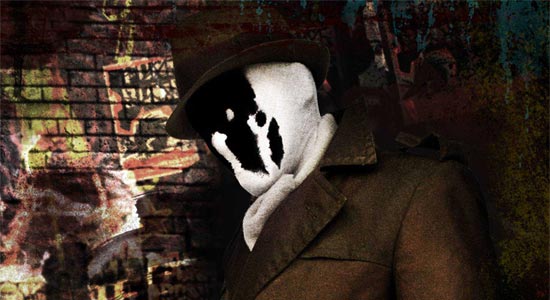 But what I didn't expect to see is that someone would have re-created masks of Rorschach, complete with changing black-and-white ink blot patterns! And yet, such a thing not only exists, it's for sale.

Check out RorschachMasks.com, where a very talented (and anonymous) graphic artist not only creates and produces these masks, but they change their ink-blot patterns dependent on whether you're breathing in or out! There even exists a set of tips (lightly edited by me) for how to maximize the effect:

The effect is most apparent in temperatures around 70 degrees [Fahrenheit] or lower, as you need warm/cool air to activate the shift. I've seen some people carry around a damp sponge or napkin in their pocket and subtly wipe their mask to keep it moist - it reacts to subtle breaths better in that state. Also, if you buy/own two or more masks, when you slip off to the bathroom that's prime opportunity to switch faces and keep the effect "new" for the people around you.

(Yes, I'm sure that the author meant Fahrenheit... think about it!)

There are five separate patterns of Rorschach mask available; check out the video that shows each one in action!

Just like a hypercolor T-shirt or a mood ring, this mask operates off of the property of thermochromism, in this particular case, by using temperature-sensitive ink. A change in temperature changes what frequencies of light are absorbed/emitted by the either the dye molecules or the liquid crystals used in thermochromism, and my guess is that these masks use the dyes, which are both less toxic and coarser in their temperature sensitivities.

Pretty neat, what a little bit of physics can add to your costumes. Enjoy pondering this find, and have a great weekend!

Watchmen is great. Dana's review is basically right, so consider this a "me too" and an expansion on certain themes. As all nerds now know, the movie changes key events from the end of the graphic novels. I think that the major change was the right decision: giant psychic squid are awesome, but…

How's Your Life? I Dunno, Is It Raining?

If you've been reading this blog for a while, you probably know that I'm fascinated by findings that show just how little we know about ourselves. Most of what's going on in our heads occurs below the level of awareness, and behind the often impenetrable barrier of the unconscious. Often when we're…

We made the 45 mile drive to distant Alexandria to see Watchmen this afternoon. On the way there, I learned that neither Skatje nor Collin had ever even tried to read the graphic novel, so I almost slammed on the brakes and turned around to make them sit down and read it before I'd take them — but…

The hidden face codes of fish

Take a look at these two fish. At first glance, they seem incredibly similar but in fact, they belong to two separate species. The one on the top is an Ambon damselfish (Pomacentrus amboinensis) and the one on the bottom is a lemon damselfish (P.moluccensis). If the distinction is hard for us to…

This is chemistry, not physics. You physicists want to take credit for everything!

I really wish I'd known about this like 3 months ago. I was seriously contemplating a Rorschach halloween costume but didn't think I could do the face justice. Even cooler would be applying some sort of heating element that could modulate the ink in other locations (without burning off your face).

Too bad we aren't able to change the temperature of our eyes and cheeks by mere force of will.

if you want to purchase these watchmen rorschach mask at best prices then you can check out the site
http://www.chromonite.com

Regarding "Chromonite" posted above: Don't support copycat thieves! Losers who copied an original idea are pathetic...