The world is an awfully big place now. Santa's job has to be tougher than its ever been before, with more and more people relying on his deliveries each year. From Australia to Scandinavia to Queens, NY, Santa is undoubtedly the hero of the holiday season. As Run DMC taught me from a young age, there's nothing wrong with celebrating in your own particular fashion, as they do in their classic,

Christmas In Hollis.
All across the world, every year without fail at this time, children delight with joy at the presents brought to them by Santa Claus. So, how does he do it? 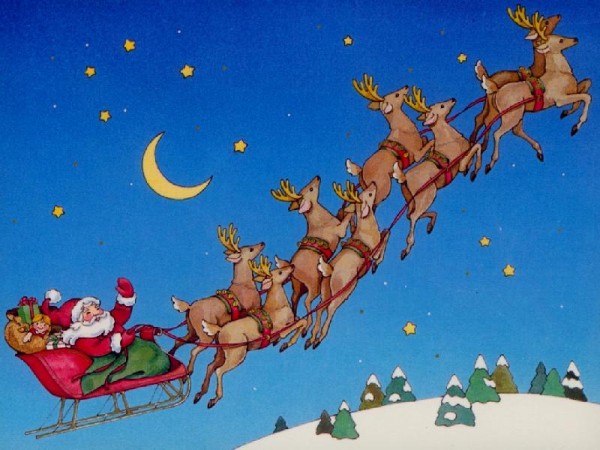 Santa's first problem is that he has a long distance to travel, and not that long to do it. If Santa starts at the beginning of Christmas Eve (after sundown, of course) in places like Australia, Japan, and parts of Russia, and ends in Alaska and Hawaii just before dawn on Christmas morning, it gives him about 36 hours to play with. (Thank you, international date line.) 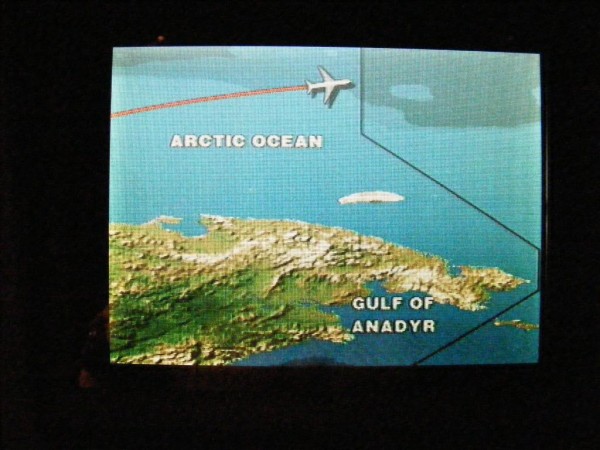 There are right around 7 billion people in the world; let's round that down and say that Santa has one billion households to visit. Now, in some rural places, it may take many kilometers (or miles) to get to your neighbor's house, and in a metropolis like New York or Tokyo, it may be a matter of mere feet (or meters). Let's split the difference, and assume that each of the one billion households on Earth is 10 meters away from the previous one. This is assuming, as we can infer from NORAD's tracking of Santa's delivery path, that Santa is pretty efficient in moving from house-to-house. 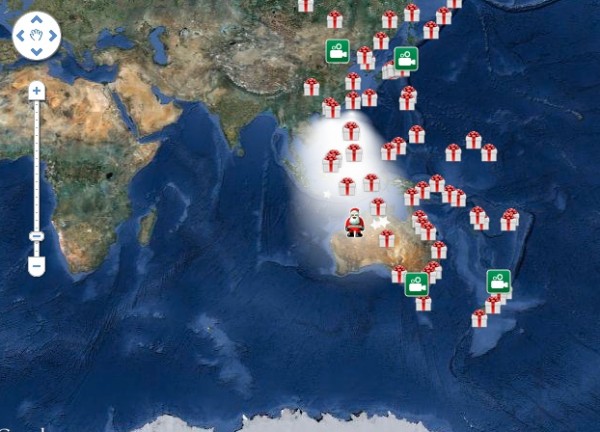 Even allowing him to cut corners like this, Santa still has to travel ten million kilometers in 36 hours. If all he does is travel from house-to-house in this time -- assuming the delivery of presents is instantaneous -- he needs to move at an average speed of 77 kilometers per second (48 miles per second). Put another way, he gets about 130 microseconds to travel to, deliver presents to, and leave each household. Perhaps a technology upgrade is necessary? 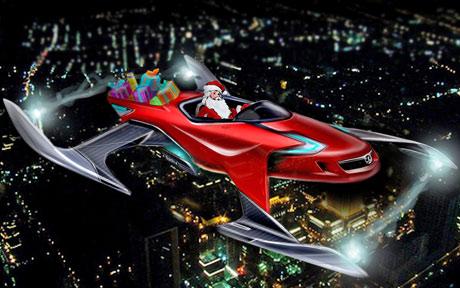 I don't even think a vehicle this impressive will do. In fact, the most powerful rocket we've ever built won't do it, either. 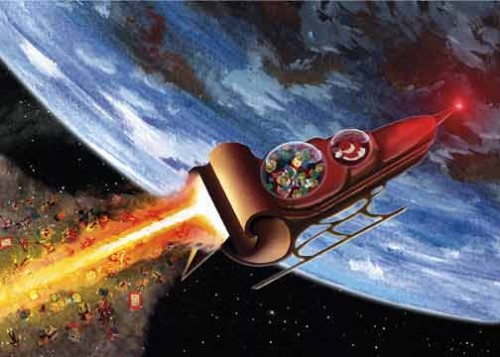 There's only one thing that's ever gone as fast through the air as Santa would need to in order to deliver presents: meteors! (Or, as they're better known, shooting stars.) There's... umm... just one problem with meteors. 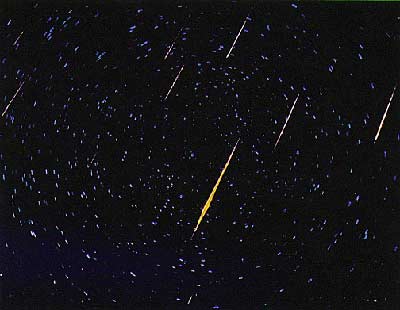 They tend to burn up in the atmosphere! When you calculate how much air resistance affects Santa, you've got to remember that he's directly exposed to the air, in his open sleigh and all. (Granted, I'm more than happy to allow Santa quite the upgrade!) 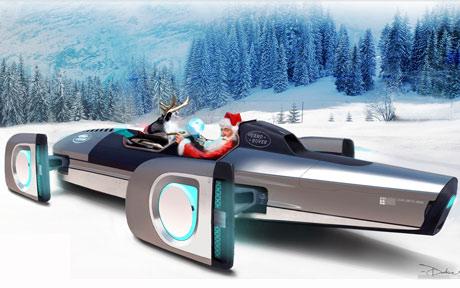 When I work out the numbers for Santa -- moving as fast as he does, exposed to the air -- I find that he needs to dissipate 57 trillion Joules of heat every second to avoid burning up like meteors do. So, there are two reasonable explanations for how he does this. 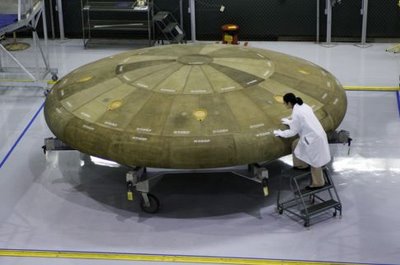 The first explanation is that Santa has the most advanced heat shield ever made. And why wouldn't he; surely his elves are just as good as NASA engineers, yes? But maybe Santa went down the Steve Austin route instead, and was rebuilt better, stronger, and faster than before... 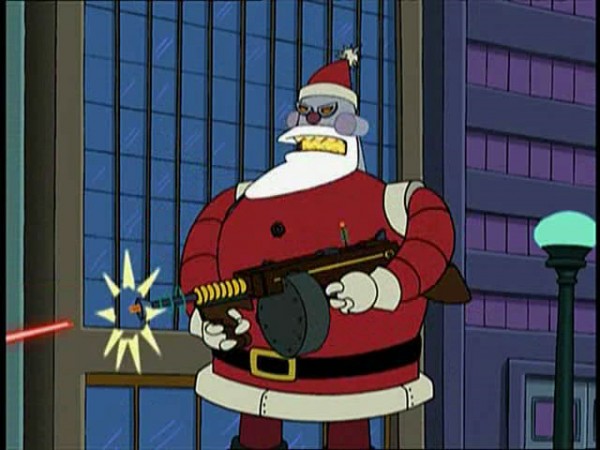 Ladies and gentlemen, Santa could also be a robot! (Or, at the very least, a cyborg.)

Now, forget about chimneys (my house doesn't even have one); in that 130 microseconds, Santa's got to get those presents from his sleigh into my house, and he's got to do it about a billion times. Even if he somehow can make those deliveries instantaneously, he can't deliver presents moving at 77 kilometers per second; the kinetic energy of even a nerf football moving at that speed would be... umm... let's say, "bad." 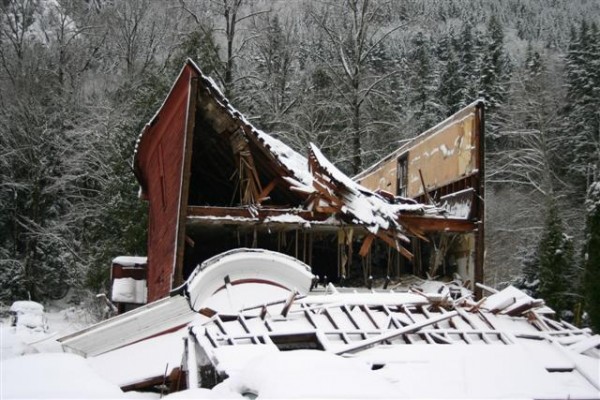 Santa seems to be pretty good at avoiding situations like this. No matter how you slice it, the presents -- and hence, Santa -- must be coming to rest before they're delivered. For Santa, going from 77 km/s to rest to 77 km/s again, even if we were to generously give him the whole 130 microseconds to do this, means an average acceleration of over one billion "G"s. If Santa weighs about 100 kg (he's a big guy, after all), this means that just starting and stopping his sleigh makes a force on Santa that's the equivalent of stacking three Empire State Buildings on top of him. 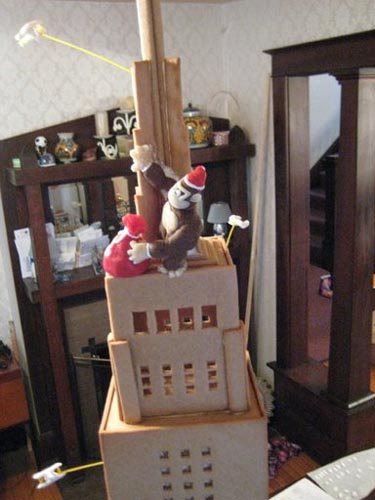 You may say that's impossible, but if there's one thing I've learned, it's that Santa is an unequivocal Christmas badass. However he manages to do it, Santa sure has overcome some tremendous technical obstacles! And yet all over the world, children still manage to receive both love and presents this time of year. 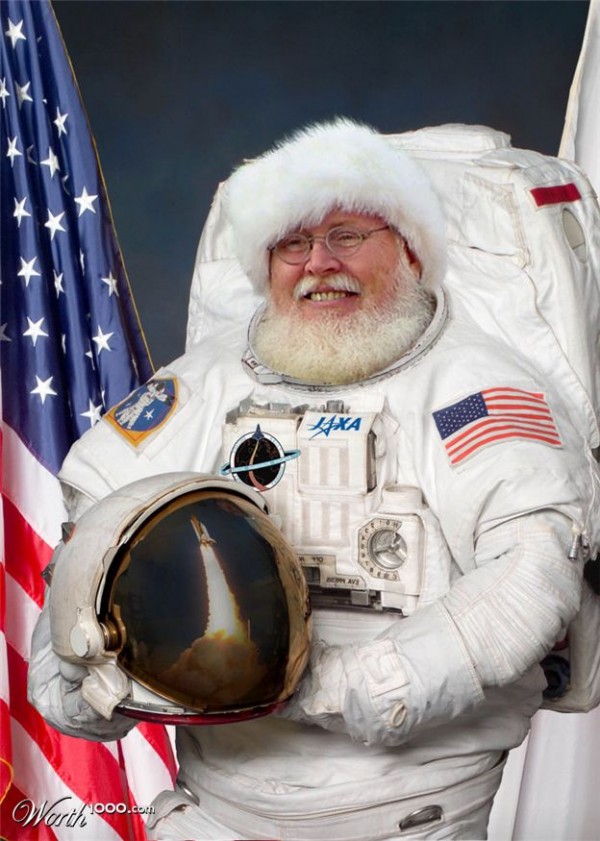 My theory? Santa is more powerful than you can possibly imagine. And much like Chuck Norris, the laws of physics are simply no match for his power. Happy holidays, everyone!

Definitely impressive, but nothing compared to how fast he has to move his bowels to clear out all those cookies. It's lucky for Santa that he eats the cookies and not the reindeer...

Happy holidays to all!

But at those velocities, his position is so very uncertain that he's literally everywhere in the world at once. Quantum physics saves Santa!

Or else he has a time machine...

You are all taking the story far too literally. He has a teleporter and he pops in and out of each house. Occams razor really

Obviously Santa has a matter-darkmatter converter and a sleigh pulled by FTL Reindeer. I propose that any future claims of faster-than-light particles should refer to the particles as "Rudolf".

One word: franchisees. I mean, it's not like they hide it or anything. They hang out in malls all over the place, gathering intel for the big day.

This is all amusingly naive. Isn't it obvious? He has white hair and long beard, apparently infinite wealth, omniscience, and omnipresence. Santa Claus is clearly God, wearing a fuzzy red suit and a small pair of glasses as a disguise. And it's apparently more effective for him than it was even for Clark Kent.

Riffing off magista@3: Santa is a quantum probability wave. Since he's never actually observed in action, he's capable of being everywhere at once.

Tristan@7: They're not 'franchisees'. The correct term is 'subordinate Clauses'.

This is even better than the similar funny old "Physics of Santa"-thingummy I read years ago & which thought this might be. Cheers!

Wish I'd seen it in time for Xmas but, hey, that's my fault & I guess it is Greek / Russian / Armenian Orthodox Christmas-Time~ish 'bout now.

It's lucky for Santa that he eats the cookies and not the reindeer...

Lucky for the reindeer too! Didn't know they were edible.

Of course there's a couple of factors to consider here - one is time travel. Perhaps Santa literally has the power to stop time or to move back and forth through it thus givinmg himself as much time as he needs?

More prosaically there's the fact that Santa a has helpers -and maybe clones.

Plus you have to recall that only "good" children get the presents - & Santa apparently doesn't visit every nation or religio-cultural group on the planet which kinda cuts the numbers down just a little.

Merry Christmas, and too cute a new way to veiw santa