The Evolution of Starlight

“Aristotle taught that stars are made of a different matter than the four earthly elements— a quintessence— that also happens to be what the human psyche is made of. Which is why man’s spirit corresponds to the stars. Perhaps that’s not a very scientific view, but I do like the idea that there’s a little starlight in each of us.” -Lisa Kleypas

Ah, but what if you did want the scientific view of starlight? After all, it's through the very stars themselves that we've unveiled some of the greatest secrets of the Universe. 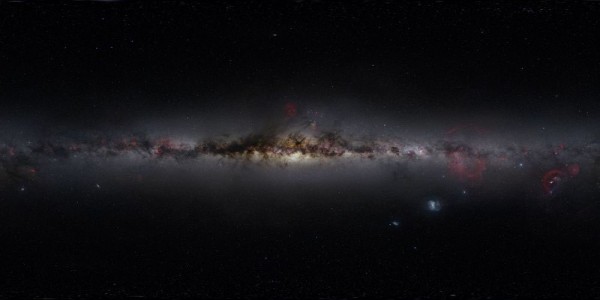 But while the stars of the night sky may appear mostly white to you (and very similar to one another), the reality is that they come in a wide variety of colors and intrinsic brightnesses, as this famous photo from the Hubble Space Telescope demonstrates. 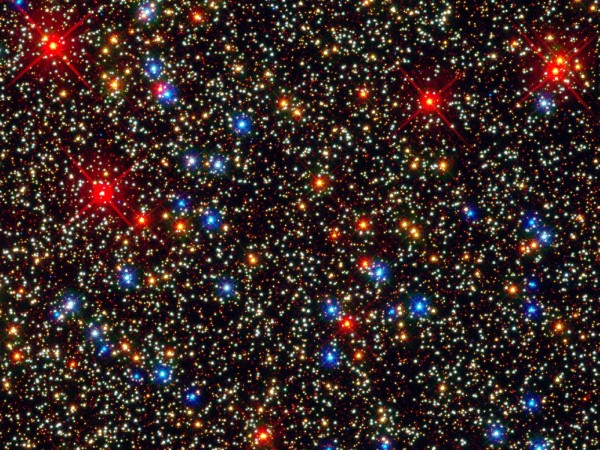 Believe it or not, every individual star in the Universe has -- barring a merger with another star -- its fate completely determined from birth. Here's how it all work, from beginning to end. 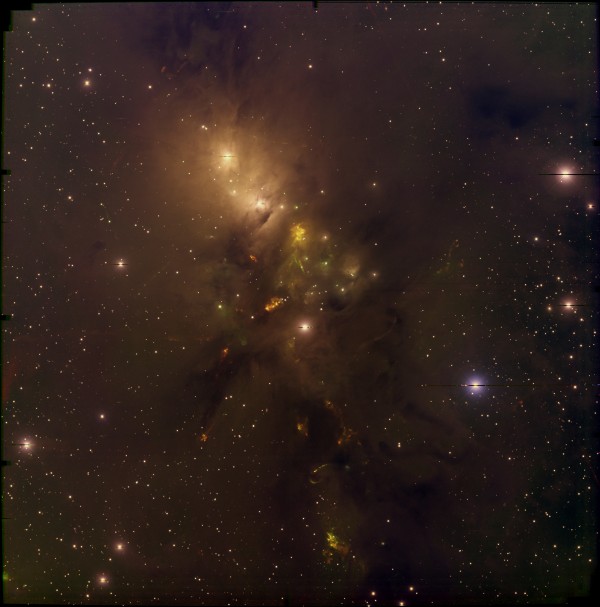 When a large enough molecular cloud -- a cloud of cold, hydrogen-rich gas -- collapses, a significant fraction of the cloud forms new stars. How is that mass distributed? It's spread out (roughly) evenly, by mass, among the seven major different main-sequence star types.

Of course, that means that only about 0.12% of the stars will be O-and-B-type stars by number, while around 75% will be M-stars. Unsurprisingly, the O-stars will be the brightest of all the stars, as, being the most massive, they also burn through their fuel the fastest, which makes them the most luminous. It's the reason why -- when we look at a very young star cluster -- we find it dominated by these incredibly bright, blue stars, even though they're vastly outnumbered by much dimmer, redder ones. 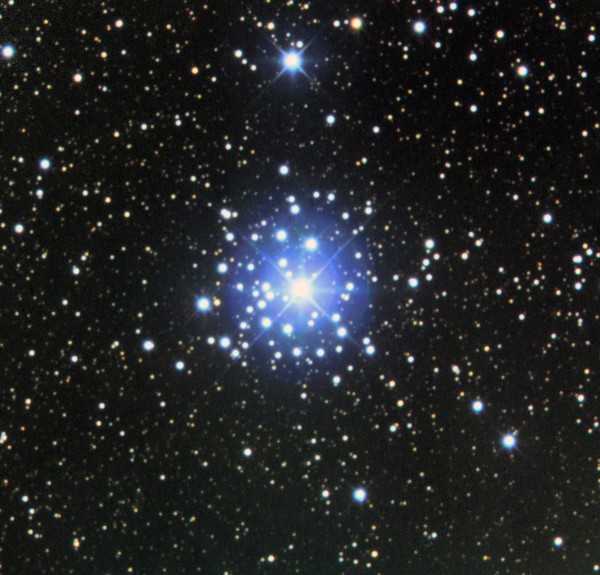 If we were to graph the luminosity, or intrinsic brightness of each star in the cluster on the y-axis, and the color (bluest to the left, reddest to the right) on the x-axis, we'd get a path that snakes upwards. This type of diagram is known as the Hertzsprung-Russell Diagram (or H-R diagram for short), and the snaking path is known as the main sequence, which is where stars that are primarily burning hydrogen in their core all live. (And yes, this includes our Sun!)

But over time, stars run out of hydrogen in their core, and the bluest, most massive stars burn through their hydrogen the fastest! A brand-spankin' new cluster of stars will only have main sequence stars, while an older population of stars will have an H-R diagram that looks much more complicated. For example, globular cluster M55 (maybe next week's Messier Monday?) is quite old, and its H-R diagram looks like this. 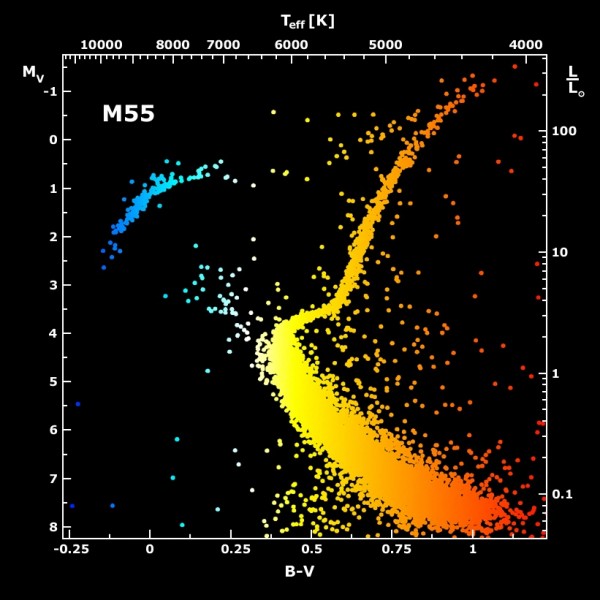 The high-mass stars -- all the ones more massive than the Sun, in this cluster's case -- have all long since ceased burning hydrogen in their cores. (Those few main sequence, blue stars to the left of the turnoff are known as blue stragglers, and they come from two lower-mass main sequence stars merging.) When this happens, pretty much every star will have its core, now devoid of hydrogen, begin to contract. And thanks to your friend thermodynamics, when the core of a star contracts under these conditions, it heats up. Eventually, it heats up enough that hydrogen will begin fusing in a shell around the core, which causes the star to swell. (Every star type will do this except M-stars, which are too low in mass to begin another stage of fusion.) 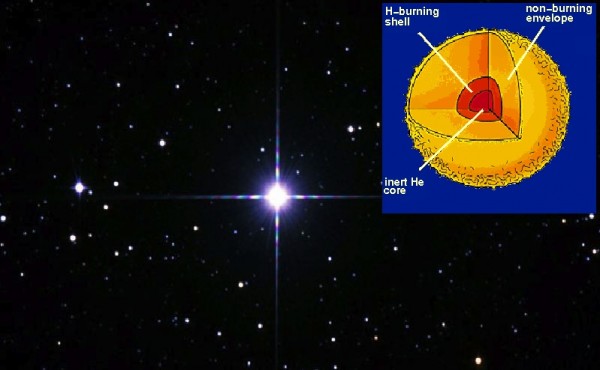 This is what's going on with Procyon, one of the brightest and closest stars in the night sky, at just 11.5 light years away. Over a timespan of tens of millions of years, subgiant stars will continue to expand and cool in their outer layers, while their inert cores continue to heat up, eventually reaching a sufficiently high temperature to begin fusing Helium in its core!

At this stage, the star swells immensely, and becomes a true red giant, a phase of evolution that may last hundreds of millions of years, and the phase where stars achieve their maximum luminosity. These stars cool down as they evolve due to their massive, increasing size; just as adiabatic contraction caused the core to heat up, adiabatic expansion caused the surface temperature to drop, even as the overall energy output increases. As the large, red giant begins continues burning helium in its core -- first into carbon and then into oxygen and heavier elements -- the large luminosity remains roughly constant, but the star evolves to become smaller and bluer. For comparison, here's the Sun alongside Arcturus, an orange giant, and Antares, a red giant. 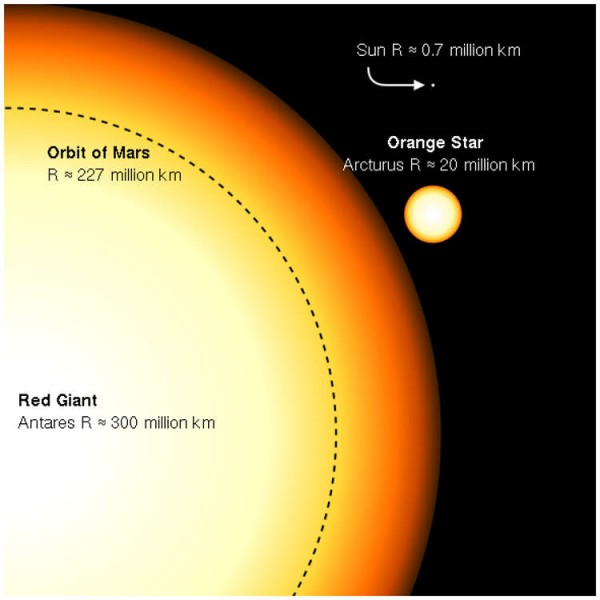 This phase of evolution is known as the horizontal branch, and many stars will even migrate back towards the main sequence!

If the star is massive enough to burn Helium in a shell as the core continues to contract, it again moves towards the red end and becomes even more luminous once again. Although it appears to become a red giant of an even higher temperature, this is another, separate evolutionary phase. The name of the phase depends on the mass of the star, as the chart below indicates. 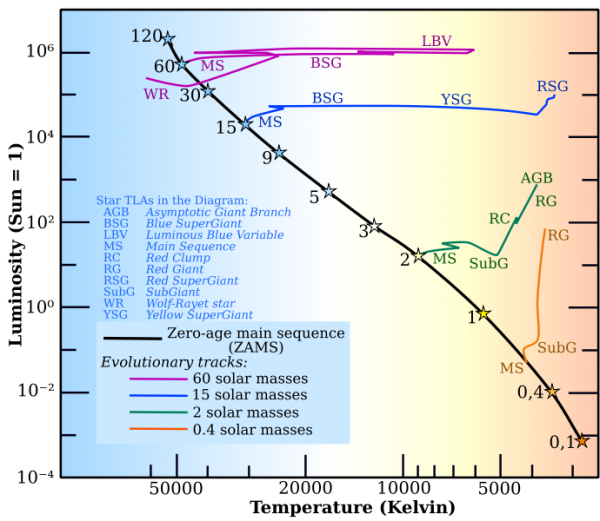 And this cycle continues: the core contracts until shell burning initiates, and -- if possible -- the core will heat up to allow fusion of heavy core elements into even heavier ones (neon, magnesium, silicon, sulphur, and eventually all the way up to iron-nickel-and-cobalt), while the star continues to switch between bluer-and-redder colors but retains a very high luminosity.

Finally, if the original star is below about eight-to-ten solar masses, fusion will end and the star's core will contract down to a white dwarf, blowing off its outer layers in the process and becoming a planetary nebula, which come in a great variety of gorgeous colors and shapes. 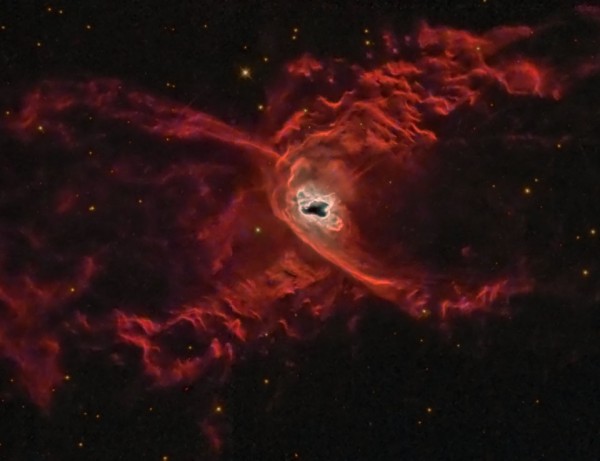 The remaining cores -- the white dwarf stars -- are only a few millionths as luminous as the original stars they were borne from, although they are generally hotter in temperature and hence bluer in color than the main sequence stars they started off as. And that's the vast majority of stars that have run out of their fuel so far -- all the K-type, G, F, A, and most of the B-type stars -- they all will end up as white dwarfs in the end. 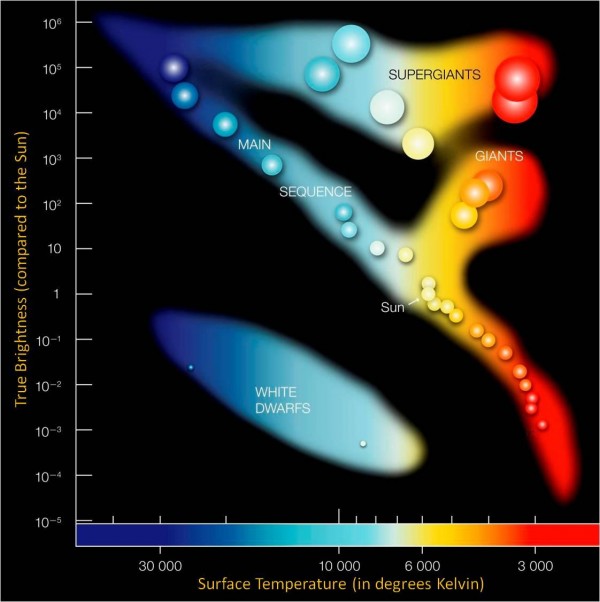 But the stars that began their life as O-type or bright B-type stars, the ones that started with 10 times the mass of our Sun or more, those wind up with core so massive that the individual atoms in the core cannot withstand gravity, and the entirety of the core collapses, producing a spectacular supernova explosion known as a supernova, resulting in either a black hole or a neutron star at the end of those star's lives!

And that's where the entirety of starlight -- from all the different stars in the Universe -- comes from! Now, if only I can get myself on the fictitious H-R diagram of astronomers... until then, enjoy the awesome knowledge that allows you to understand the life cycle of every star in the Universe!
Tags
Astronomy
Physics
Stars
Supernovae
Video
diagram
evolution
formation
hertzsprung
HR diagram
life cycle
russell
star formation
stellar
stellar evolution
Stars
Supernovae

Great post, as usual. As soon as I finish teaching about small solar system objects and exoplanets, it's on to the Sun and stars for my astronomy students. I expect to borrow several of your illustrations.

Oh well, so it goes.

Aristotle had access to the brightest minds of his day. He rejected them because of his false premises.

The Herzsprung-Russel diagram is other way around as usually seen, but that's actually nice. Same thing, nice to see it presented in another way.

If Aristotle had been wise enough to actually test his ideas, we might have had Aristotle's Laws of Motion over a thousand years before Newton came along.

I've often thought that there must be a very natural diagram to be plotted, based on the H-R one. Instead of colour and luminosity, use mass and age as the axes, and map out the types of star.

What about those stars that are so massive that, when they go supernova, they leave no remnants behind? I'm sure I've recently read about such stars recently.