"Modern man must descend the spiral of his own absurdity to the lowest point; only then can he look beyond it." -Vaclav Havel

But the spiral is more than a metaphor or a mathematical shape, it's also the most common feature observed in the galaxies out there in the Universe. There are 27 spiral galaxies in the Messier Catalogue, and today I want to show you how to find the most southerly of them all! 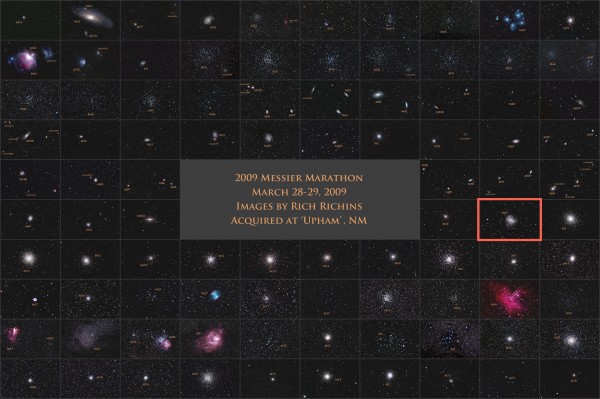 The Southern Pinwheel Galaxy, also known as Messier 83, is a full 30 degrees south of the celestial equator, making it particularly difficult to see from high northern latitudes. Yet even tonight, in the dead of winter, from north of the 45th parallel where I am, you can still see it if you know where to look. 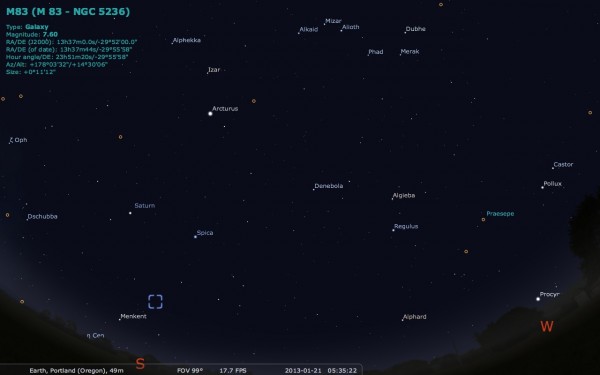 High in the pre-dawn skies, you'll find the familiar Big Dipper, which is always a great starting point for northern skywatchers. Follow the arc of the handle down to Arcturus, and then speed on to Spica, the bright blue star that's farther along. (And not to be confused with the temporarily nearby Saturn, which is yellow.) At about 5:30 AM, the southern star Menkent will peek up over the horizon, and about 3/4 of the way from Spica to Menkent will be the bright, face-on spiral galaxy M83, surrounded by the labelled, relatively bright stars below in a pair of binoculars. 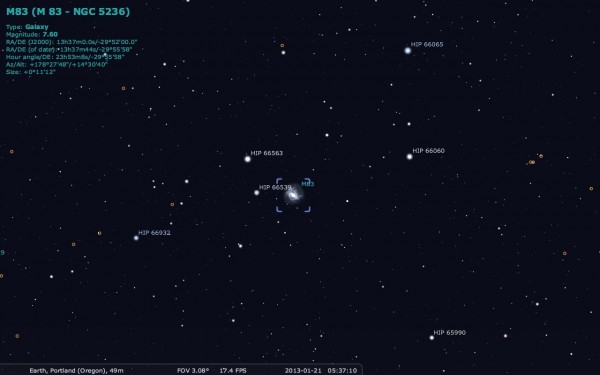 This galaxy -- a barred spiral galaxy just 15 million light-years distant -- is actually only half the size of our Milky Way, but in many ways is even more spectacular. 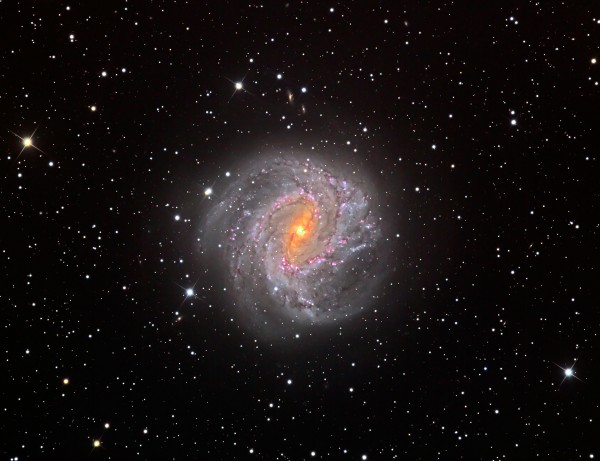 One of the closest face-on spirals to us, the Southern Pinwheel Galaxy is about 55,000 light years across, with a huge, barred center and intense waves of ongoing star-formation littering its limbs. As shown above, any amateur with a red filter can identify this for themselves, but the following European Southern Observatory image really highlights just how prevalent star formation is in this mighty mite. 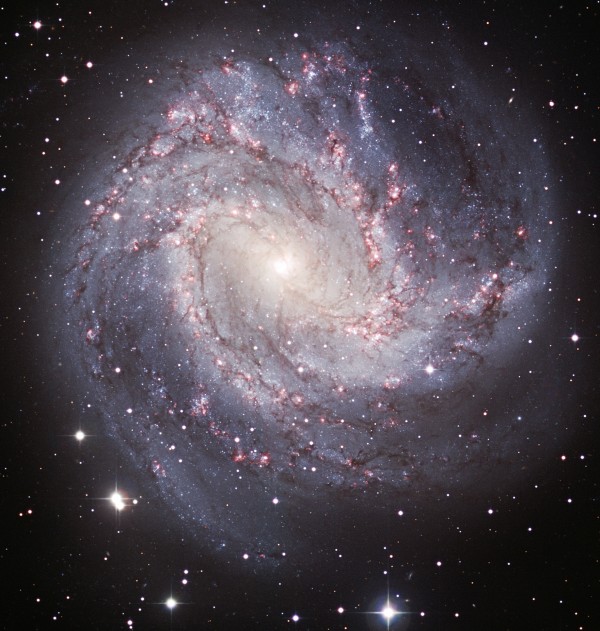 Yes, there's a giant central core, a big bar extending for more than a third the length of the galaxy, and at least four giant arms, sweeping out intense bursts of star formation (in pink). But what else is going on with this galaxy?

To find out more, we can look in wavelengths other than those visible to our eyes. To start, we can look in the near infrared, where galactic dust is invisible, and see millions of the otherwise obscured stars that illuminate this island Universe. 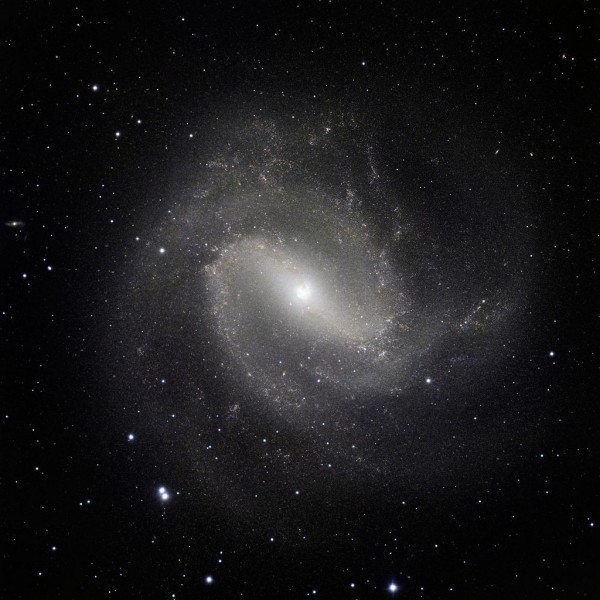 This spectacular view, above, is available in an even larger format thanks to the Very Large Telescope's HAWK-I instrument. But if we head off farther into the infrared portion of the spectrum, we can view the warm, star-forming dust, which is illuminated (in green and red) by the NASA's WISE spacecraft, below. 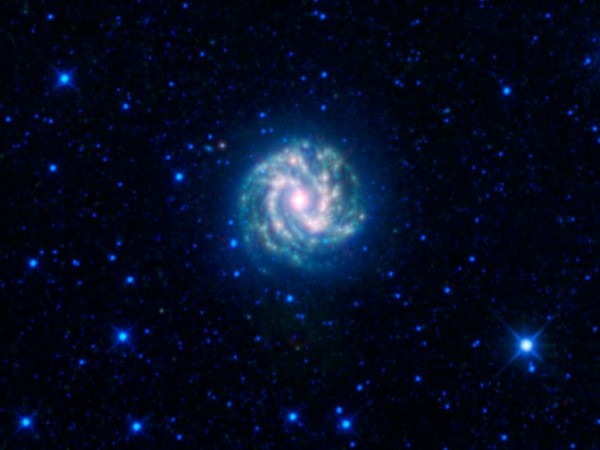 If we want to go to even longer wavelengths -- all the way into the radio -- we can find where cold, neutral hydrogen atoms are, courtesy of the Very Large Array, the world's largest array of radio telescopes. Shown below (in red) are the locations of the bulk of neutral hydrogen atoms, extending out far beyond the visible disk of this galaxy. 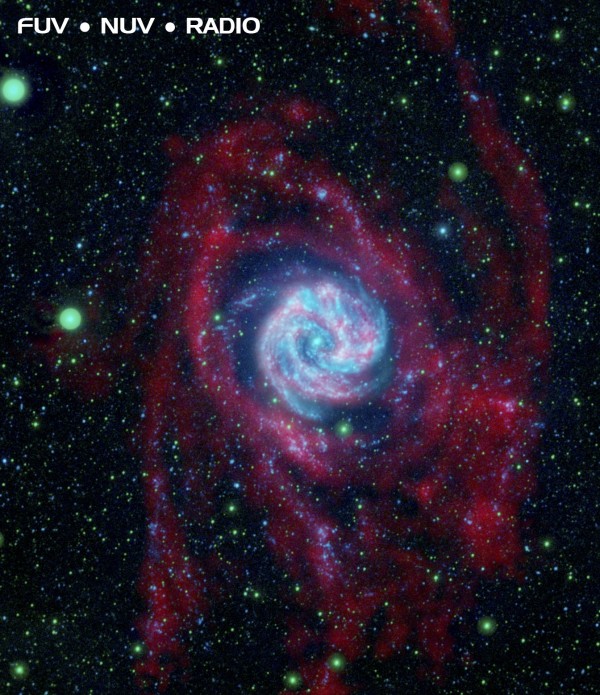 The image above is a composite of the radio light (in red) with ultraviolet light, which is indicative of the location of the hottest, most newly-formed stars.

If we want to -- courtesy of GALEX -- we can see what the ultraviolet reveals all on its own. 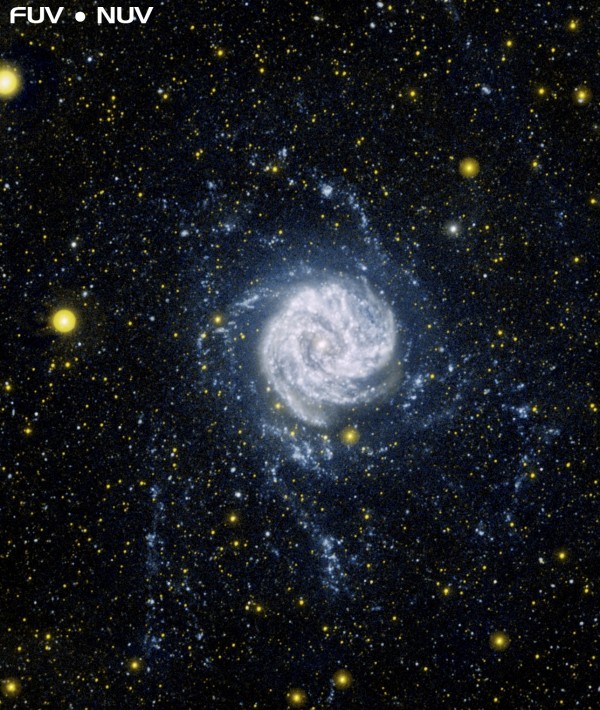 You may be surprised to see that this galaxy is forming stars well beyond where its visible extent comes to an end. You shouldn't be: it's quite conceivable that this galaxy has just gobbled up a smaller dwarf neighbor, and the ultraviolet and radio views seem to reflect this quite well!

But there's plenty more we can learn by going to the X-ray, courtesy of Chandra. 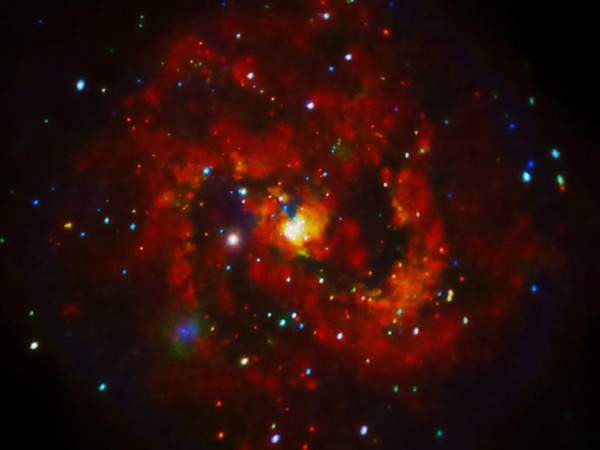 You see, there was a supernova that was observed in M83 back in 1957 (SN 1957D), but it's been very difficult to detect the leftover supernova remnant in every wavelength: radio, optical, and X-ray. And there should be one, since this was a Type II supernova! However, the remnant was found in radio in 1981, in the optical in 1987, and finally just two years ago -- after over eight days of data-taking -- by Chandra! 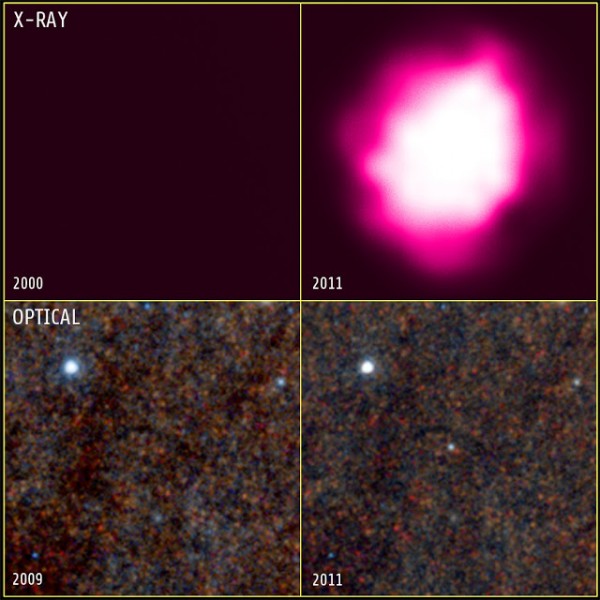 What we learned from the spectrum of X-rays suggests that there is a pulsar at the core of this remnant, making this a candidate for the youngest known pulsar in the cosmos, from our point-of-view!

But finally, if you want the highest-resolution view of this galaxy (or any object), your best bet is to turn to the Hubble Space Telescope. And have we ever got a spectacular image of the central core of this galaxy and the brightest spiral arm to extend from the central bar! 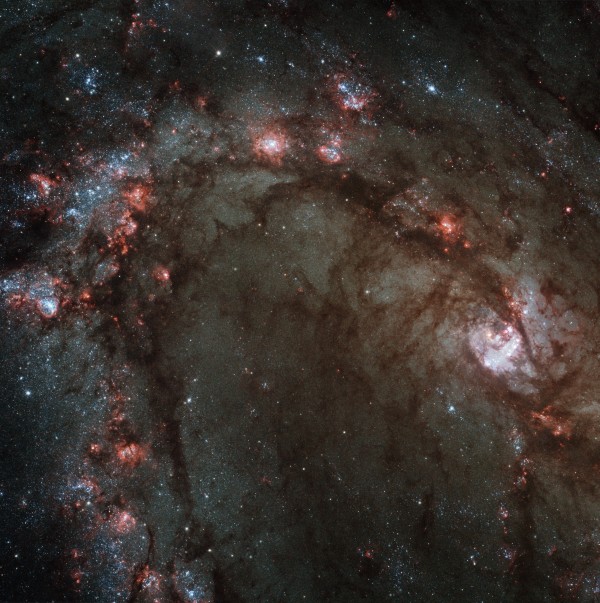 Even this clickably-delicious image is reduced in resolution from the original. To show you what the bright stars and star forming regions along that left-most spiral arm look like, I've got an original-resolution slice of the Hubble image to share with you. Hang on to your hats!

And this wondrous island Universe is all yours for the viewing in the early morning skies, or for even longer the farther south you go!

So far, including today’s entry, we’ve taken a look at the following Messier objects:

Come back next week for another Messier Monday, where I promise a treat no matter how far north you live!

And thats just one arm of one whimpy galaxy.

Wow! Galaxies are incredible beasts. And spirals are the wildest, prettiest. Some of them are really easy to spot and even to image with humble equipment. I did so with M33 and M101 http://jcaastro.zxq.net/?p=320

In M33 some pink knots of star formation are easily shown, the same way as Ethan comment on M83

I love this stuff.

Just a glance at M83 indicated it had two nuclei. The two sets of spiral arms give it away.
It is not 'just an appearance' of dual nuclei.
Under certain conditions the nucleus of a galaxy can disassociate into two or more parts in a process called Mitosis of Galactic Nuclei. (Too long a description to put here.) There are many other examples in progressive stages of development.
See Markarian 315 and 739. NGC 3314.
The most interesting features that distinguish Mitosis from the more common merger are: Parent and offspring nuclei rotate in the same direction.
The two do not interfere gravitationally (no distortion) with each other. K
In a merger there are all kinds of 'fireworks'. Not with Mitosis.