"If the sight of the blue skies fills you with joy, if the simplest things of nature have a message that you understand, rejoice, for your soul is alive." -Eleanora Duse

Welcome to another Messier Monday, where each week we take a look at one of the 110 deep-sky objects that make up the Messier Catalogue! One of the most common type of object in this catalogue is the globular cluster -- referred to by Messier as a round nebula (since he couldn't resolve them into individual stars) -- of which there are 29 in the catalogue. 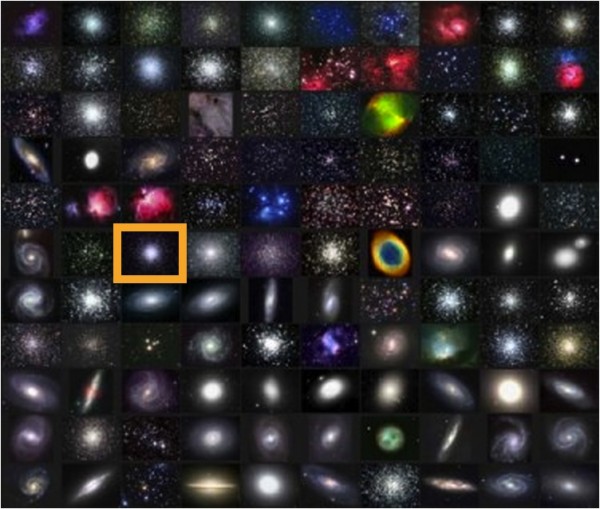 Out of all of them, one of them had to be the most northerly, relative to the Milky Way. Little did we know that -- hundreds of years later -- with over 150 known globular clusters surrounding our galaxy, Messier 53 would still turn out to be the most northerly one in the galaxy, hovering about 60,000 light years nearly due north of the galactic center.

Despite its enormous distance from us (it's the third most distant of the 29 Messier globular clusters), Messier 53 is so intrinsically bright that, under ideal skies, it's actually visible to the naked eye! Here's how to find it. 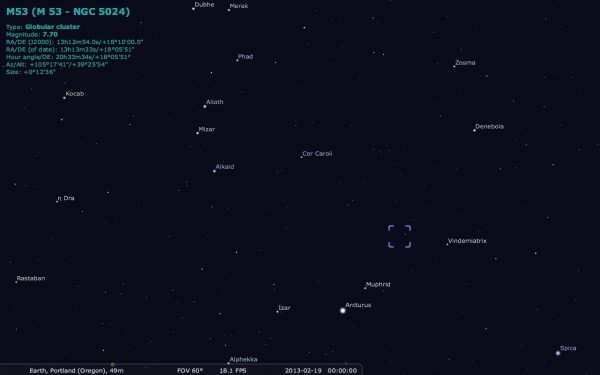 Find the Big Dipper in the sky, and follow the arc of the handle down to the bright star Arcturus. Instead of speeding on to Spica, find the somewhat dimmer star Muphrid and follow a nearly straight line towards the much dimmer (magnitude +4) star, Diadem, also known as α Comae Berenices. 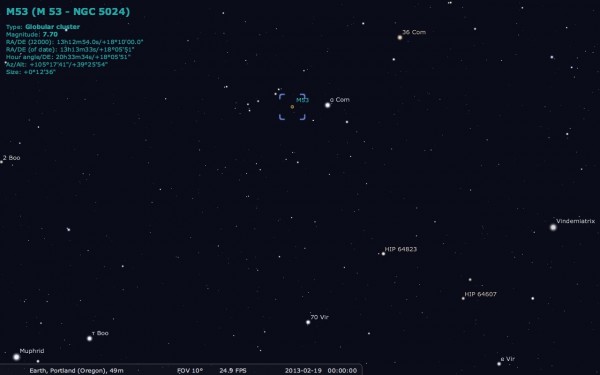 Through a small telescope or a decent pair of binoculars, you should be able to find the little "L" shaped asterism just to the left in the image above (I call it "Little Italy"), and the globular cluster M53 can be found directly in between them. 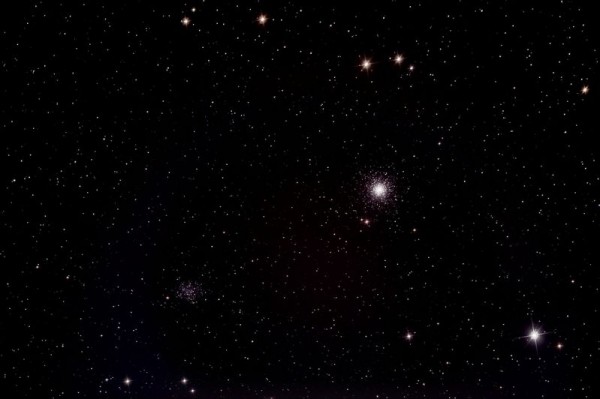 Image credit: Rick Beno of Conferring With the Sky Observatory.

This globular cluster is relatively compact -- it's class V (on a scale of I to XII) -- and much brighter than its neighboring globular cluster, NGC 5053 (visible above), which is actually ever so slightly closer to us than M53. 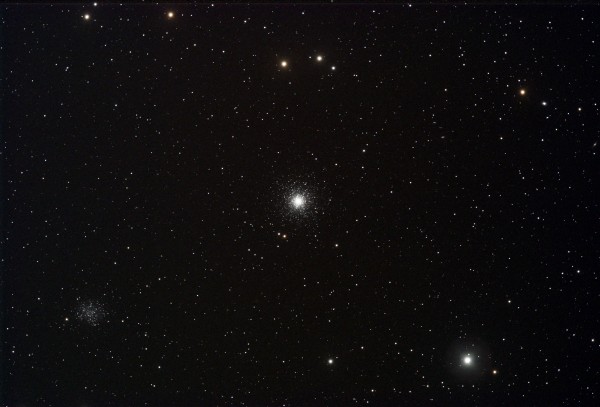 But Messier 53 is not only brighter and denser than most globulars, it's actually surprising in a number of ways, which can be seen in color-sensitive astrophotos like the one below. 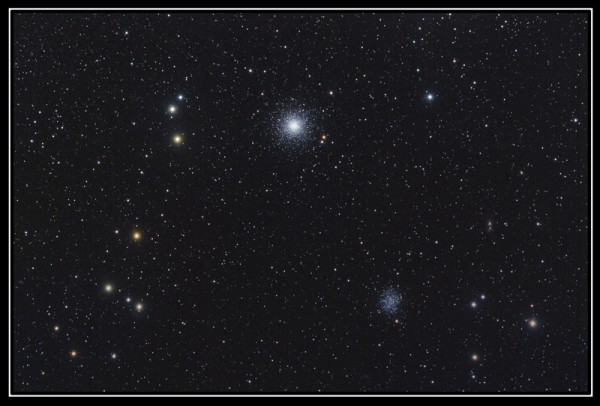 One of the tricks to getting photos like this is to make sure that the relatively bright star Diadem is out-of-frame, as it is here. What you might notice is that Messier 53 is on the bluish side, something that might strike you as unusual for a globular cluster.

The reason for this is that globular clusters are typically very old collections of stars. Messier 53 is no exception, at approximately 12.7 billion years of age. It's strange, then, that it would be blue in appearance, as all of the blue-colored stars (class O, B, and A) should have all long burned out by now.

And yet, this cluster is dotted with bright blue and red points, evidence of both relatively recent star formation and a significant population of red giant stars, suspiciously bright for a cluster this old and this distant. 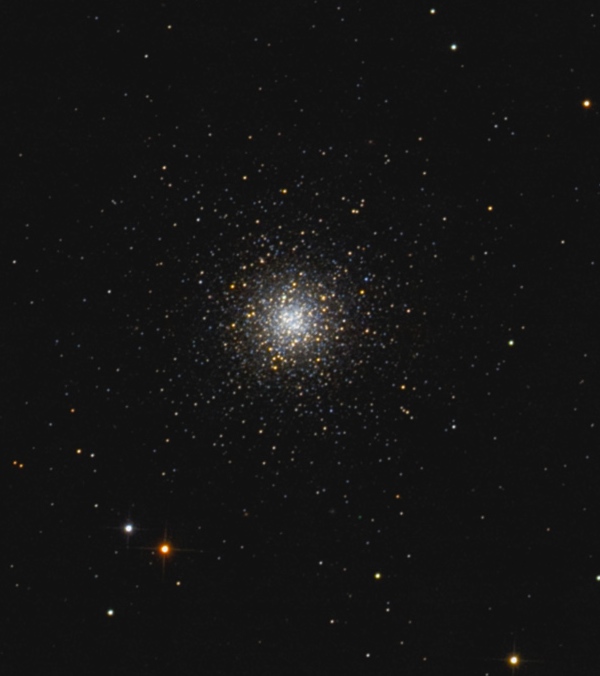 There are undeniably stars that have formed more recently than 12.7 billion years ago; that's the only explanation. Looking in ultraviolet light confirms this, courtesy of the GALEX satellite. 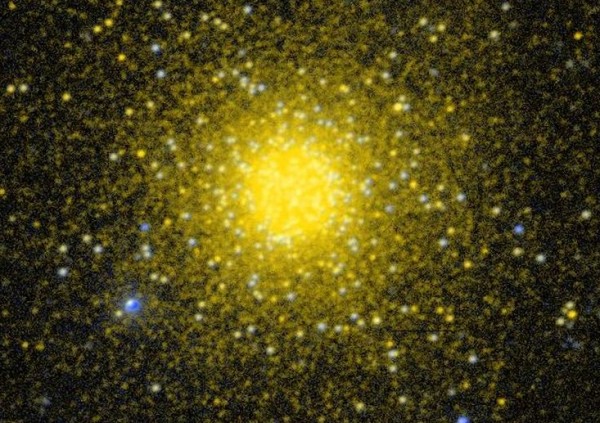 What's going on here? Like many globular clusters, the heavier stars (and binary stars) have segregated themselves preferentially towards the center, where mergers occur and they form a new population of bluer stars known as blue stragglers.

But unlike other globulars with blue stragglers, this one still has surprises. 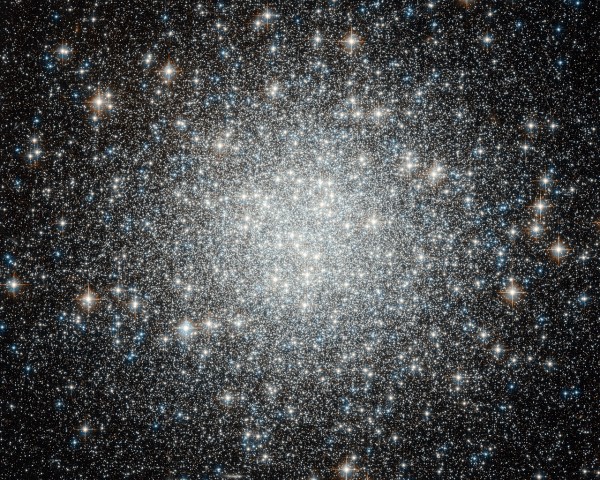 The core region of this globular cluster -- in this image from Hubble -- shows, quite surprisingly, mind you, that there are an unusually large number of blue stragglers away from the core of this cluster! The reason why is still a mystery, and astronomers are still on the lookout for possible explanations such as a recent merger, interaction or tidal tail associated with this cluster. 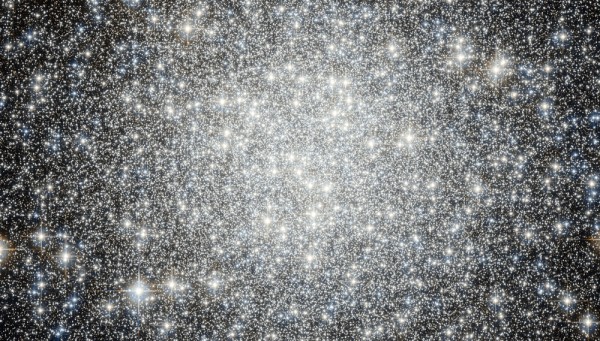 But in the meantime, the heart of this cluster, illuminated by Hubble's powerful Advanced Camera for Surveys, is worth a deeper look. 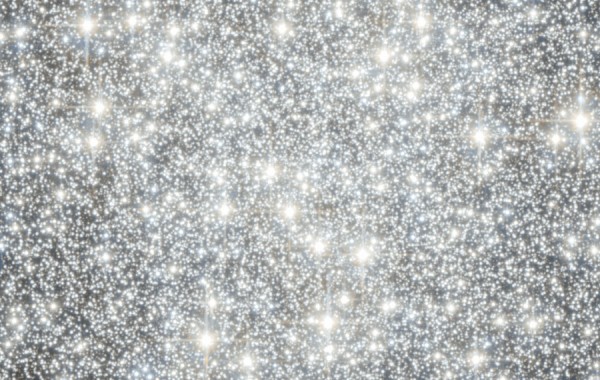 At the limit of its resolution, it appears this core is packed with stars everywhere you go. And yet, remember, this globular cluster is only class V, or of only intermediate density at its core. There are plenty that are packed far tighter. 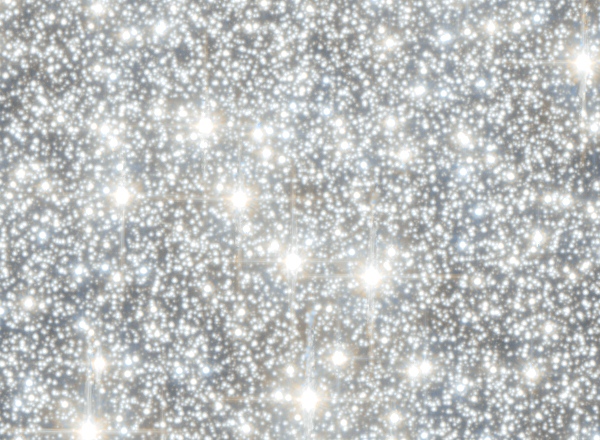 But that makes it no less beautiful. Famed astronomer William Herschel, the first to resolve this globular cluster into individual stars, wrote the following description for Messier 53:

A cluster of very close stars; one of the most beautiful objects I remember to have seen in the heavens. The cluster appears under the form of a solid ball, consisting of small stars, quite compressed into one blaze of light, with a great number of loose ones surrounding it, and distinctly visible in the general mass.

Not a bad choice for an object to look and marvel at this Messier Monday! Including today, we've taken a look at the following Messier objects:

Come back next week for another Messier Monday, where we'll uncover the science, history and night-sky views of another beautiful deep-sky fixture!

What's the average distance between stars in the core?

Have you seen this yet Ethan? Big news about the search for dark matter?

Ah, the infamous question mark. Nice find, The Bobs, but I'm not going to get excited until the actual results are out since the answer to the headline-question could easily be "No." Maybe what they found is a complete absence of the DM annihilation signal sufficient to rule out a range of hypothesis.

Which, granted, would be excellent science. My point is that there's no reason to jump the gun to conclusions.

The Bobs and CB, I have been toying with the idea of writing a post called "The Worst Kind of Science Hype" for some time now.

This headline -- which is all Sam Ting's fault -- may be the tipping point.

Maybe call it "The Worst Kind of Science Hype?" so if anyone criticizes your article you can just point at the question mark. ;)

Lay person here. What I can't envision is what it would look like if you were in the middle of that cluster looking back toward Earth. And would the gravity effects of all those stars be lethal to humans? I suspect the radiation would be.

Looked from this cluster, the view you would have on the plane of the MilkyWay would be spectacular! And the gravity itself won't kill you - indeed the radiation would. However: when so many stars are packed in such small space, gravity effects could lead to colliding stars and wayward planets and such, which could be lethal if one is coming directly at you ;)