"Yes, indeed, if humankind — from humble farmers in the fields and toiling workers in the cities to teachers, people of independent means, those who have reached the pinnacle of fame or fortune, even the most frivolous of society women — if they knew what profound inner pleasure await those who gaze at the heavens, then France, nay, the whole of Europe, would be covered with telescopes instead of bayonets, thereby promoting universal happiness and peace." -Camille Flammarion

Welcome back to Messier Monday here on Starts With A Bang, where each Monday we take a detailed look at one of the 110 deep-sky objects that make up the Messier Catalogue. With each object easily visible through even a modest telescope (or excellent binoculars) and a good sky, these fixtures in the night sky are an outstanding way to get to know the clusters, nebulae, and galaxies most easily visible from Earth. 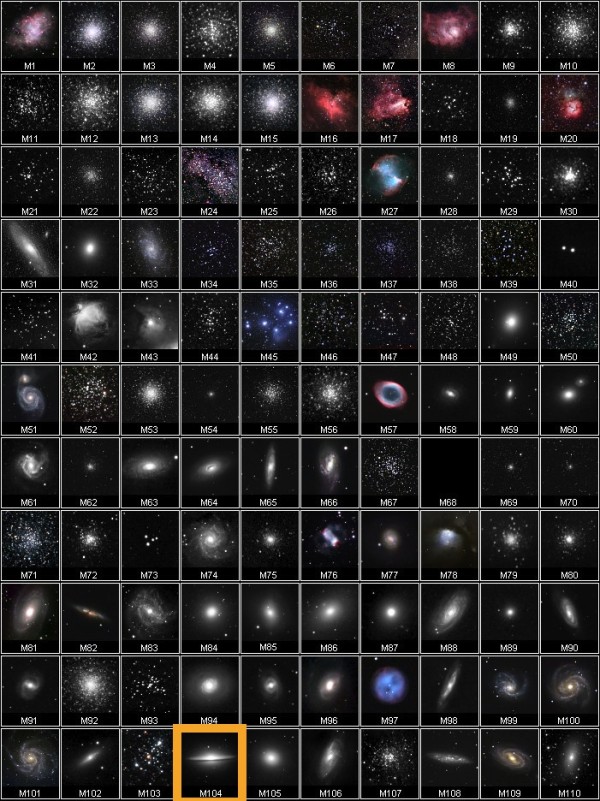 Messier's catalogue was "officially" completed in 1781, with 103 objects. But Messier also had compiled many handwritten notes about a number of other deep-sky objects that he (and his assistant, Méchain) had observed, catalogued, described and accurately located in the sky. These notes, lost for more than a century, were serendipitously discovered by Camille Flammarion in 1921. At that time, six more objects -- Messier 104 through Messier 109 -- were added to the catalogue.

Today, let's explore the first object posthumously added to the Messier Catalogue: the Sombrero Galaxy, M104. Here's how to find it. 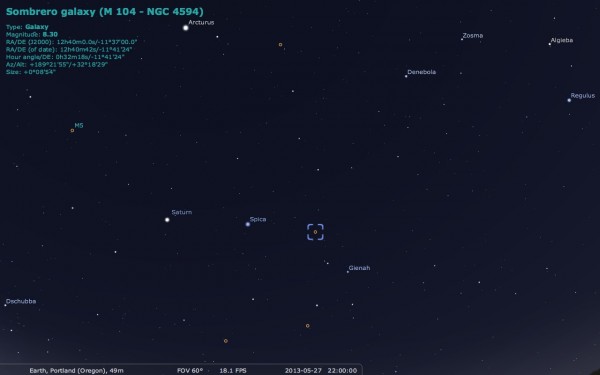 The bright northern hemisphere star, Spica, is prominent right now in the post-sunset skies. If you follow the arc of the Big Dipper's handle to the orange giant Arcturus (arc-to-Arcturus), you can continue onwards to the bright blue Spica (speed-on-to-Spica). Yellow Saturn is nearby to the east, but those of you hunting for the Sombrero should look about the same distance away -- around 11 degrees -- to the west instead. 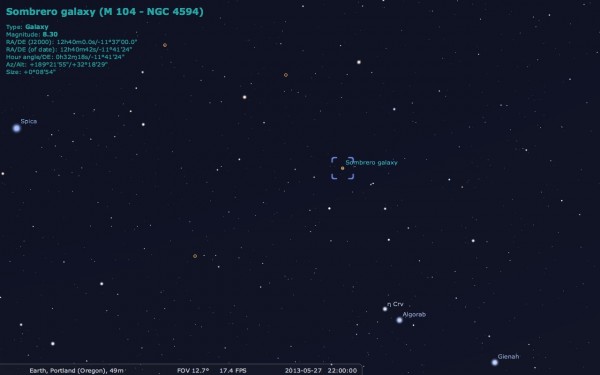 Just on the border between the constellations Virgo and Corvus, you can find a small, fuzzy object located in a region of space without any bright stars in it. Through a pair of binoculars or a low-power telescope, however, you should be able to find it -- with a little star-hopping -- north of the Algorab / η Corvi pair.

Here's what you might see as the background star field near the Sombrero. 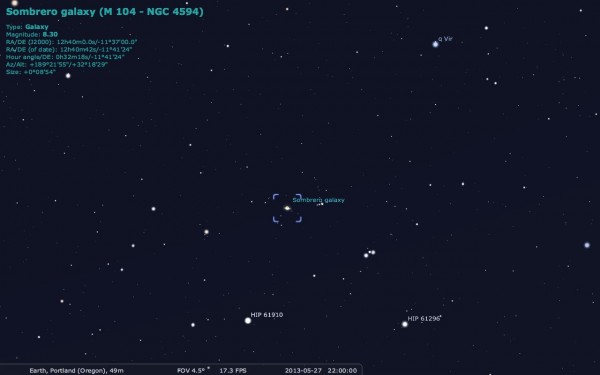 If you can find the three stars (around magnitude 9-to-10) that form a line, very close together, you'll notice that they all point towards a faint, fuzzy object in your field-of-view. That's the best way, if you can gather enough light, to spot this deep-sky object.

As we get closer to the solstice, you'll have to wait until the sky darkens sufficiently to see this object, as any lingering sunlight will likely wreck your chances of viewing the Sombrero Galaxy. But as long as the Moon hasn't yet risen, if you can find this object, a spectacular sight awaits you. 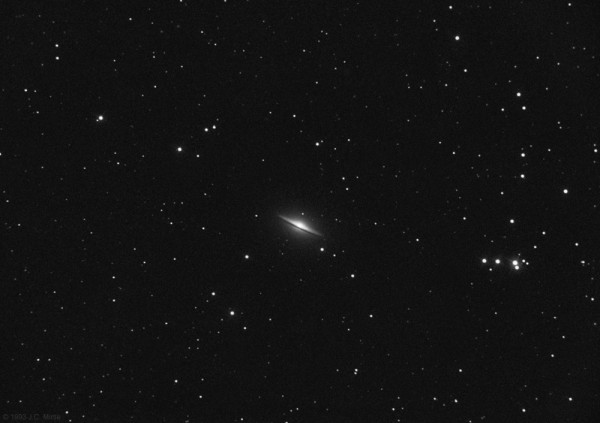 Some 28 million light-years away, this spectacular galaxy contains both features normally found exclusively in either spiral or elliptical galaxies. Like many spirals, it has a strong disc shape, spiral arms, no central bar, and strong, prominent dust lanes. As it's inclined at only 7° relative to our line-of-sight, these dust lanes are particularly prominent, and appear in practically all images of the Sombrero Galaxy. 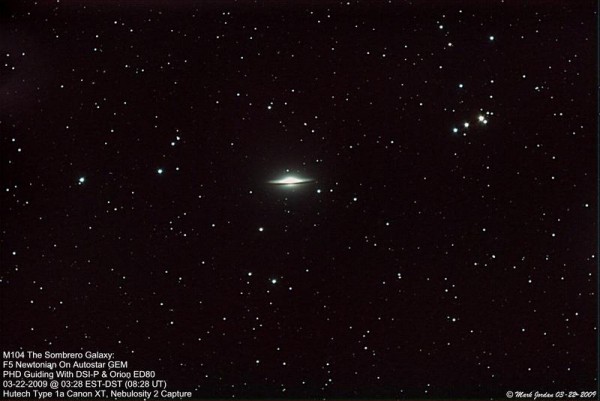 But it also contains a huge central bulge, far bigger than we normally see in spiral galaxies. This galaxy is about 50,000 light-years in diameter, or about half the size of the Milky Way. But its halo is humongous, something the scale of which is normally visible only in giant elliptical galaxies! The halo is so large that it extends maybe 10,000 light-years beyond the extent of its spiral structure, which includes more than a thousand globular clusters populating the space around it; that's about ten times as many as the Milky Way has! 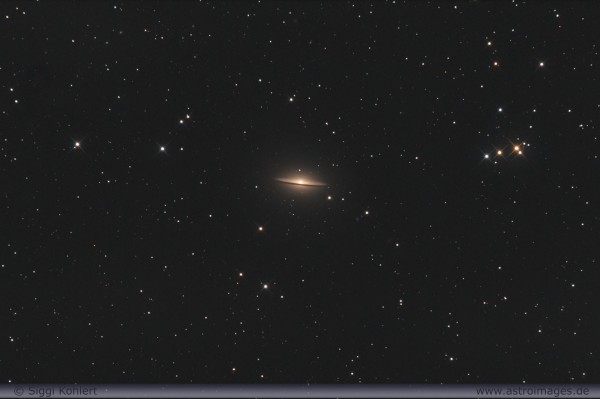 It's nicknamed the "Sombrero" for obvious reasons; the combined shape of the spiral disc, the prominent, nearly edge-on dust lanes, the central bulge and the massive, diffuse halo make this one of the most easily recognized galaxies in the night sky! 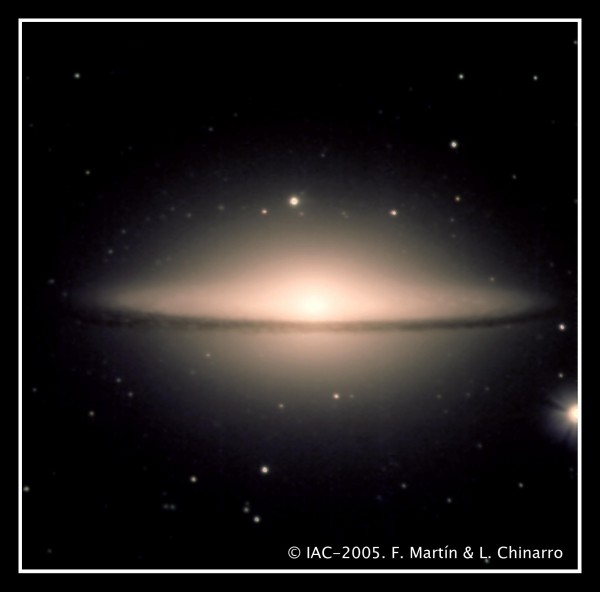 What's less-well-known about this object is that it's one of the fastest moving galaxies in our backyard, speeding away from us at more than 1,000 kilometers/second, or some 0.3% the speed of light! This excessive recession speed was first measured by Vesto Slipher all the way back in 1912, the largest redshift ever measured at the time, and one of the first clues that our Universe was expanding! 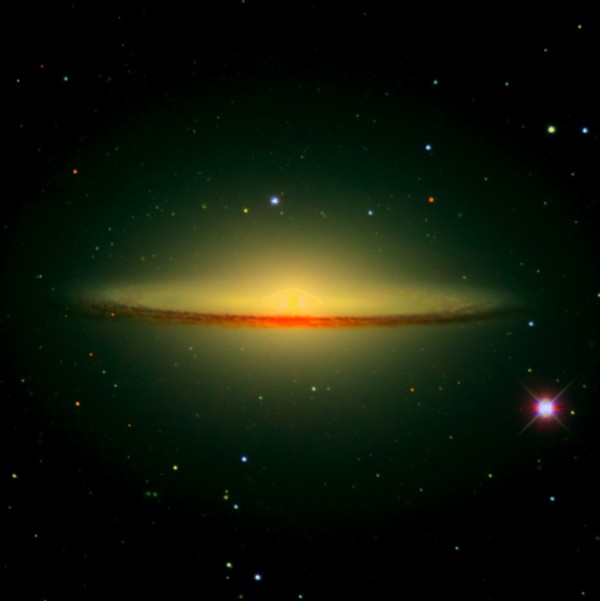 This galaxy, the dominant member of its galactic group (much like Andromeda is in ours), will never merge with our own, although it does have hope of someday merging with the Virgo supercluster! Because it gets so bright towards the center, this is a great galaxy for applying false-color, which really reveals the different brightness levels inherent to different parts of this galaxy. 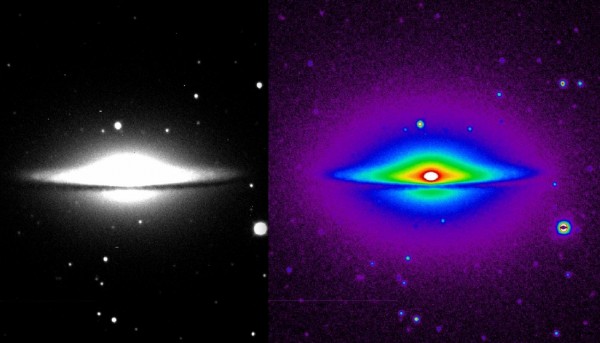 It also contains a supermassive black hole that's truly super, weighing in at around a billion times our Sun's mass, and many hundreds of times greater than our own galaxy's central black hole! The globular clusters, the central supermassive black hole, and there are plenty of other point sources. We can't see them so well in visible light, but we can always look in other wavelengths! Below, all such X-ray-emitting sources in the Sombrero are revealed in this fantastic X-Ray image taken by the Chandra Space Telescope. 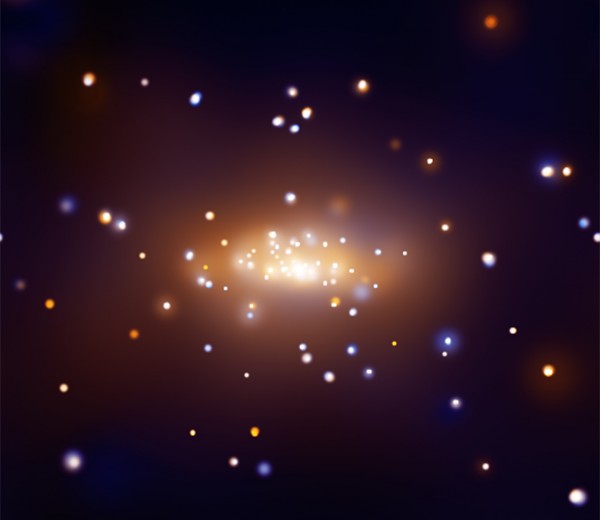 Perhaps the most spectacular visible-light image comes from the Hubble Space Telescope, which released this incredibly detailed mosaic of the Sombrero. Revealed are all the aforementioned features: spiral arms, dust lanes, central bulge, diffuse halo, and -- if you zoom in -- you can even find regions of star clusters, hidden background galaxies, and more! 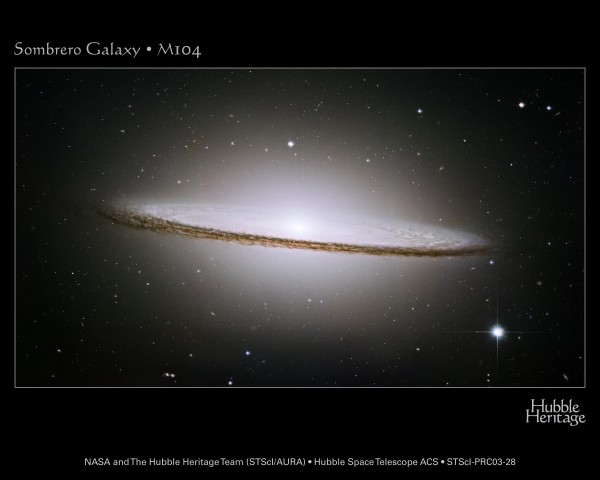 Off in the infrared, at wavelengths longer (and temperatures colder) than the human eye can perceive, the Spitzer Space Telescope has captured the Sombrero in unprecedented detail. The red colors reveal the cold dust in the disc structure, while the blue light reveals the vast, extended halo common to elliptical galaxies. 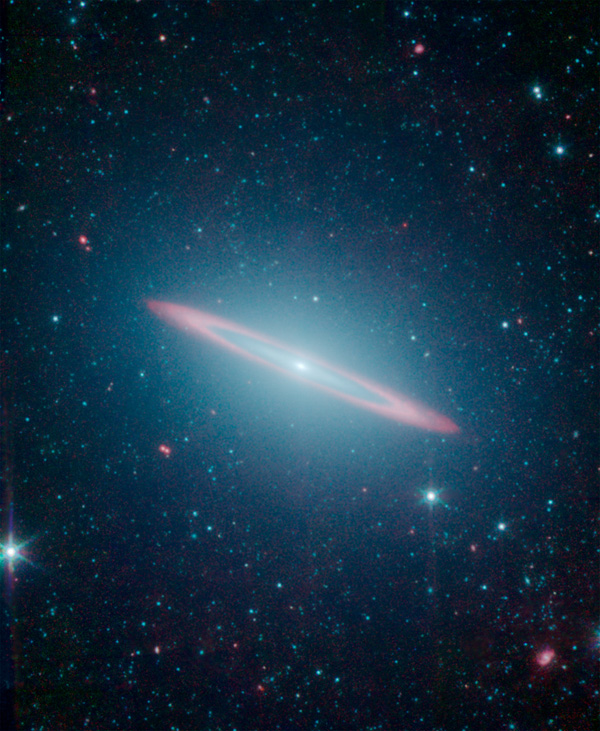 As you can clearly see, the Sombrero Galaxy is really two galaxies in one: both spiral and elliptical at once! Likely the result of multiple mergers of relatively small galaxies with a single, dominant spiral in its group, we can combine these three images in different wavelengths -- X-ray, Visible, and Infrared -- to create an unbelievable mosaic, revealing far more than the human eye could ever see on its own! 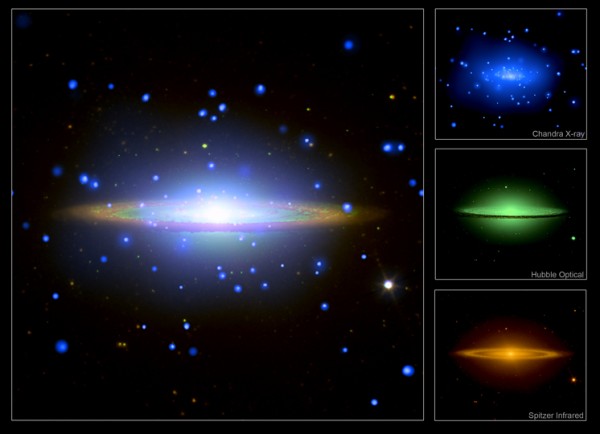 Finally, because I always save the best-for-last, archival Hubble data has been used to reprocess the Sombrero Galaxy and remove most of the glare from the elliptical portion of this object. What's left is a spectacular view of the edge-on disc structure, in detail that no other telescope can match! 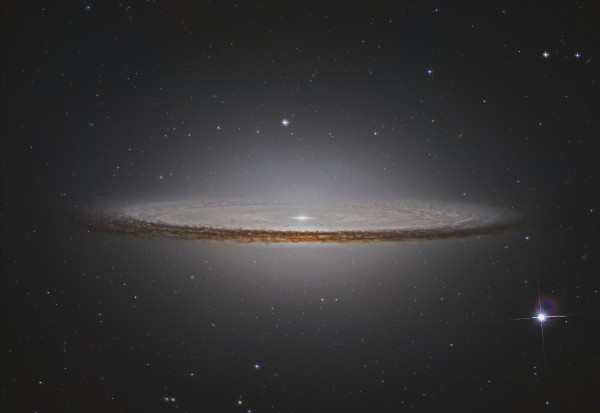 And just for good measure, I tracked down the original, full-resolution version of this, and am pleased to present to you a (vertical) tour through the central disc of the Sombrero!

That's the best view I've ever seen of a galaxy so distant in the Universe; you can even make out individual stars! Thanks for joining me for another  Messier Monday, and feel free to have a look back through the archives!

Including today's entry, we’ve taken a look at the following Messier objects:

Come back next week, where we’ll take a look at another one of the deep-sky wonders of Messier's catalogue, only here, only on Messier Monday!

Thanks Ethan for this beautiful article!
And I loved the warning from the 2003 HST archive from your "zoom in"-link that "only a few computers will be able to show the entire image of 7 MB" :-) Welcome to 2013!

Ethan, where is the full res image? My company makes huge inkjet printers (3.2x1.6m bed size) and the Hubble hi-res image of Sombrero looks stunning. I'd like to try the image with reduced glare.

Wild Bill, in the hyperlink "Zoom in", url here:
http://hubblesite.org/newscenter/archive/releases/2003/28/image/a/warn/…

Sadly it is nowhere near the limit of your printers. But I bet it would still look amazing. The HUDF is "only" 6200x6200 but I have a good print and it brings tears to my eyes every time I look at it.

Wow, what are those two little spirals at the bottom edge of the second picture up? Very cool!

Loving the Messier Monday series, and particularly that last image!

Minor nitpick though; as a Southern Hemispherian, I feel obliged to point out that Spica, with a declination of about 11 degrees south, is not a "northern hemisphere star". It's ours and you can't have it ;)