"One Ring to rule them all, One Ring to find them,
One Ring to bring them all and in the darkness bind them" -J.R.R. Tolkien

Every Monday has been devoted to our ongoing series on Messier's objects for nearly a year now, and we've covered some spectacular objects, from open star clusters to spiral galaxies, from globular clusters to giant ellipticals, from star-forming nebulae to the rare starburst galaxy, and from the lone supernova remnant to Messier's greatest mistake. With 110 deep-sky wonders to choose from, each one tells its own unique story. 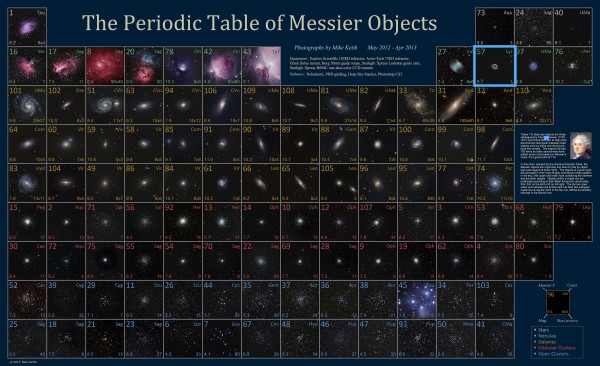 But today, we've got a very special one, so let's cut through the usual fanfare and get right to it. Today's object is the famed and beautiful Ring Nebula, Messier 57, and is the closest object in the night sky that shows us our Sun's likely fate. Let's show you how to find it. 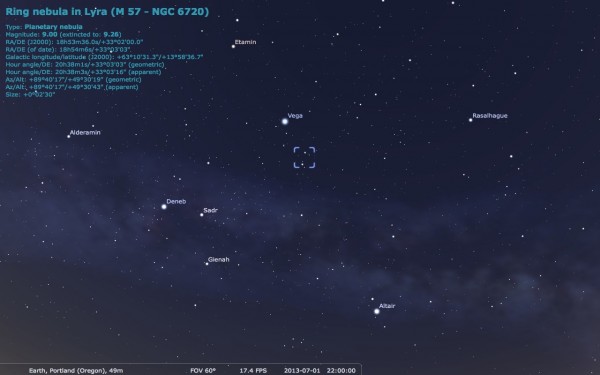 High in the summer skies immediately after sunset and through most of the night, the Summer Triangle -- the asterism consisting of the bright stars Deneb, Vega and Altair -- dominates a huge portion of the sky. Vega, the brightest of the three (and the fifth brightest star in the sky overall), is where you'll want to begin looking. Just beneath Vega (towards Altair) is a parallelogram made up of four prominent stars; along with Vega (and sometimes one more star), they make up the ancient constellation of Lyra. 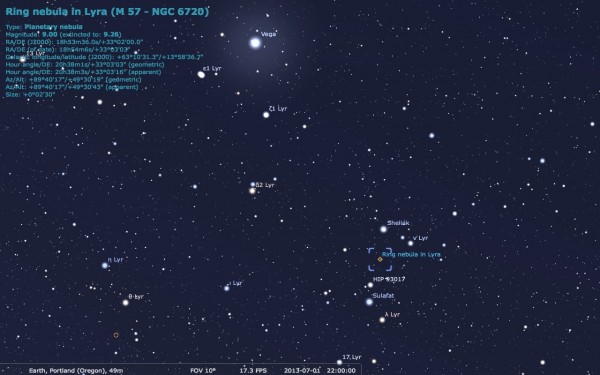 The two stars of the parallelogram farthest from Vega are Sheliak and Sulafat, both blue giant stars, and both far brighter than all the other stars of Lyra except for Vega. The Ring Nebula, M57, is practically right in the middle of these two stars, ever-so-slightly closer to Sheliak than Sulafat, but easily (if faintly) visible through even binoculars or a small telescope. 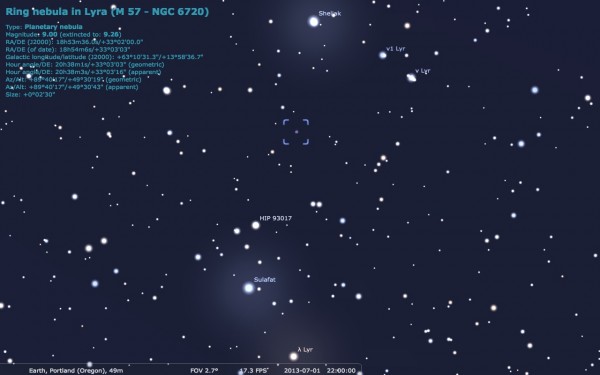 With your naked eye through a large-aperture telescope, you might indeed be able to see that this is more than just a faint, fuzzy object; you might be able to make out the distinctive ring-like shape, a dark interior, and possibly even a central "point" at the middle of it all. 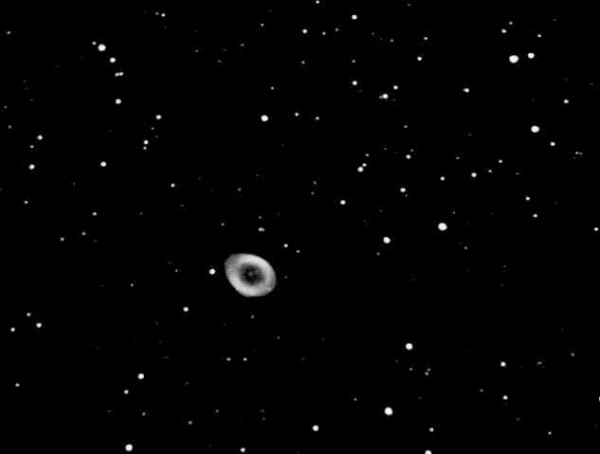 Messier himself observed this object just weeks after its 1779 discovery by Antoine Darquier de Pellepoix, saying the following:

Nebula between gamma and beta Lyrae; it is very dull, but perfectly outlined; it is as large as Jupiter & resembles a planet which is fading.

It was this description that gave rise to the term Planetary Nebula, which now describes all objects of this type, including a total of four Messier objects. But it's no planet at all! 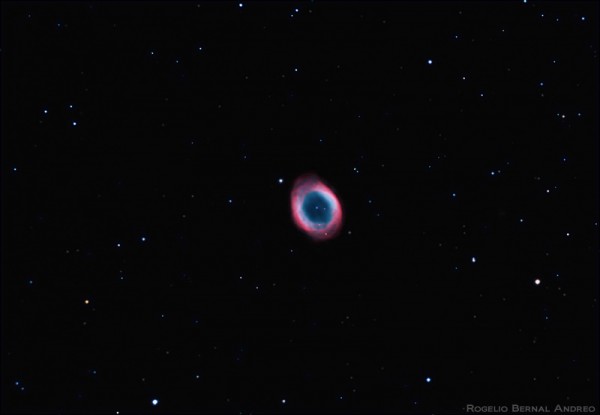 What is it, actually? Every star below about 8-to-10 solar masses (and above about 0.4-to-0.8 solar masses) will someday run out of material that it can fuse in its core. When these stars (including our Sun) are done fusing hydrogen into helium, they become giant stars, where they'll fuse helium into carbon (and whatever they can manage, up to a limit or iron/nickel/cobalt), and then... then that's it for nuclear reactions.

So all that's left is for gravity, electromagnetism, and the matter to do what they do. 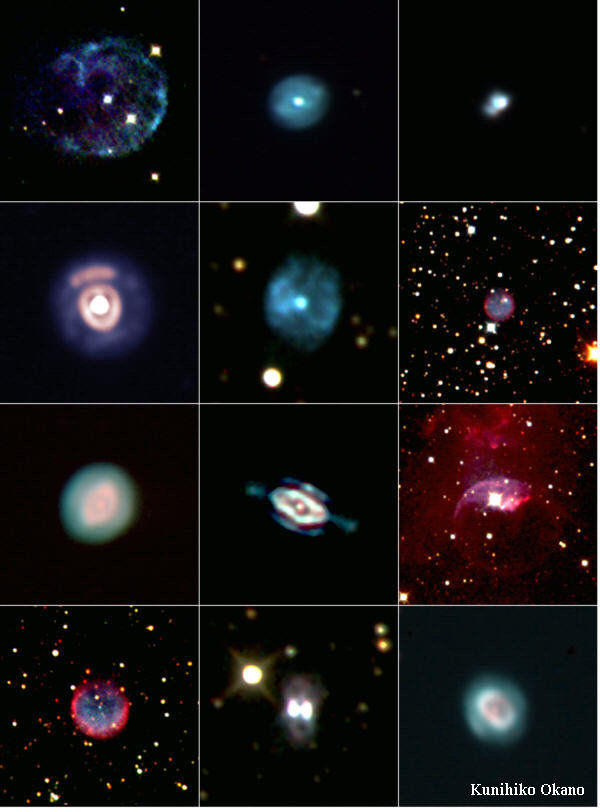 This means that the core of the star -- containing most of the heavy elements -- will contract down to a degenerate state of matter known as a white dwarf, the outer layers will be gently blown off to eventually form a planetary nebula. These are rare; we have only a few thousand (out of hundreds of billions of stars) in the Milky Way, and about 80% of them have an axi-symmetric shape, including the other three in the Messier catalogue.

But the Ring Nebula is special, and near-and-dear to me, because it's so spherical. 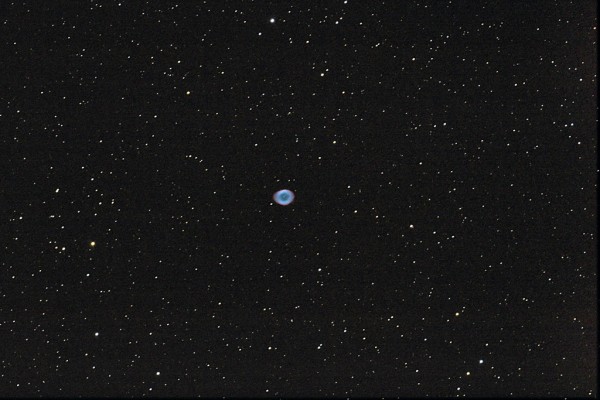 Most stars have either a binary companion, a lot of angular momentum, or some other defining feature that makes the solar system it occupies strongly different from a single, roughly stationary mass at the center. But a substantial minority -- including our Sun -- have a single, slowly rotating mass dominating well over 99% of the mass of their local neighborhood.

And that means, when it comes time to run out of fuel and end their lives, these stars will blow off their outer layers in an almost-perfect sphere. 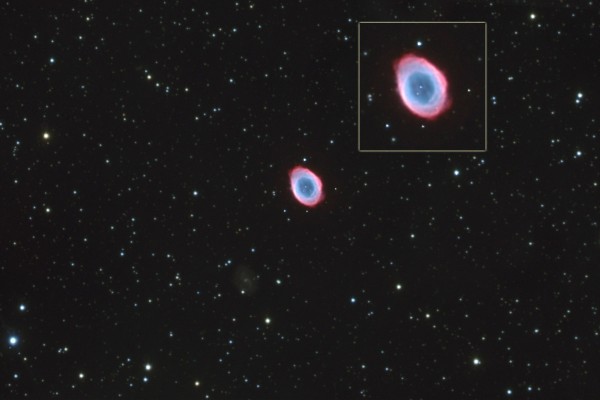 If you take the time to construct a multi-wavelength, color photograph of this, what you'll find is that the "ring" shape has different colors and brightnesses at different radii: this is due to different elements at different temperatures, which corresponds to different layers of the star that's undergoing its death throes!

You might expect that red color in the outer layers to correspond to hydrogen, the lightest (and most buoyant) element, and hence the most prominent component of the star's outer layers. You have no idea how right you are. 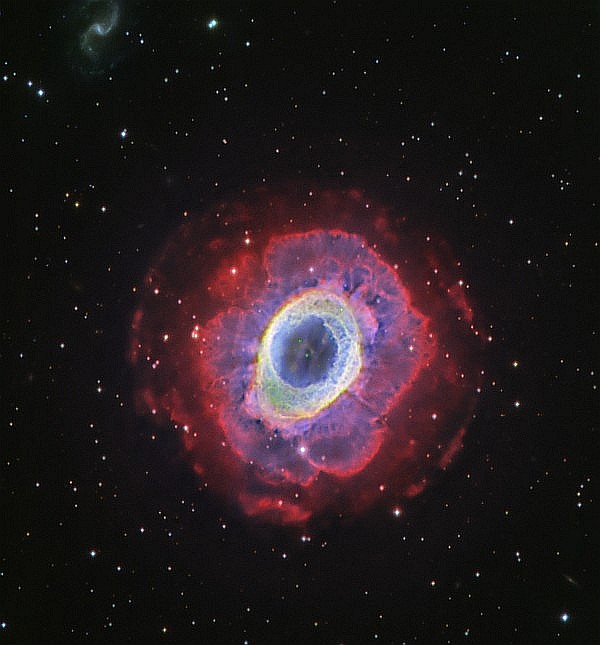 Not only is the outermost layer of this planetary nebula made almost exclusively of hydrogen, but the (ionized) hydrogen gas extends far beyond the clearly visible part of the nebula, and makes up an unbelievable 97% of the planetary nebula! This is truly remarkable, because only about 92% of the Universe was made up of hydrogen before it had any stars, which means that these stars actually do a better job of separating hydrogen out from the heavier elements and returning unburned fuel to the Universe than the Big Bang itself! 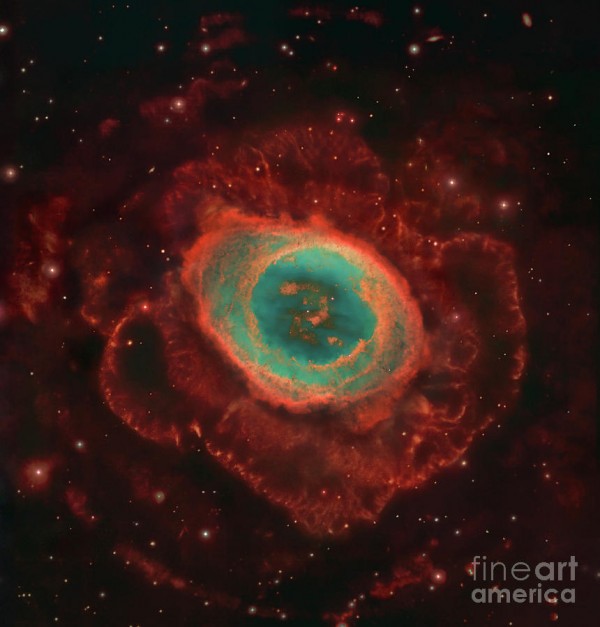 The remaining colors are dominated by heavier elements with emission lines in the visible part of the spectrum, including doubly-ionized oxygen, molecular nitrogen, molecular sulphur, and helium. About 2% of the planetary nebula is helium, and about 1% is all the heavier elements combined. The vast majority of heavier elements -- which allowed the star to shine throughout its life -- are locked up in the white dwarf contracting and cooling at the center. 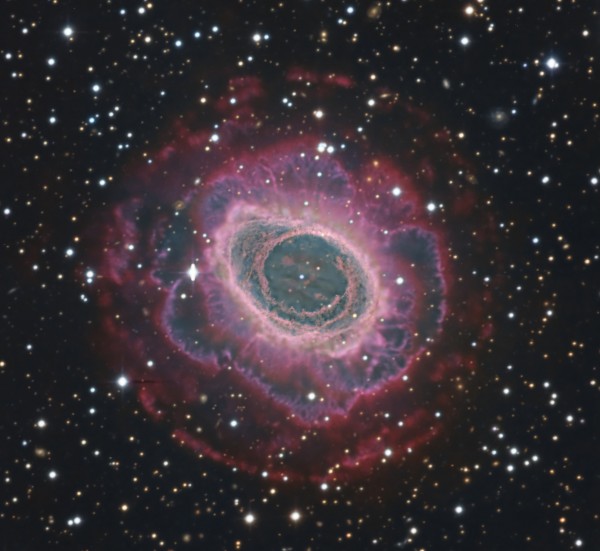 If we want a different view -- what the warm (but cooler) gas in the nebula is doing -- we can always turn to the infrared part of the spectrum, where the Spitzer Space Telescope has taken a phenomenal composite look in a completely different wavelength. 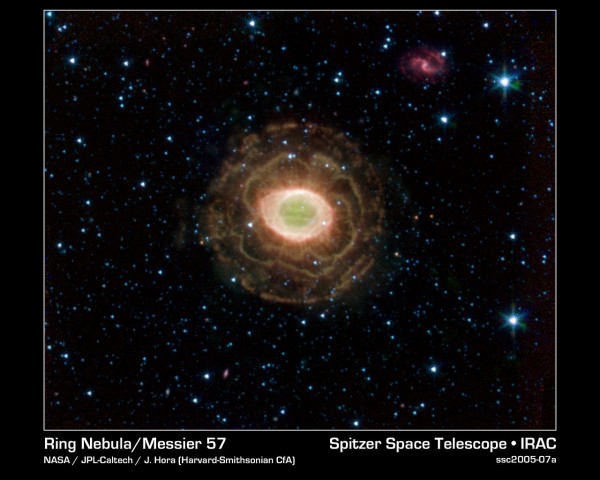 The inner regions are far hotter, which explains why they're far brighter, as it's the electrons falling down in their orbitals that causes the emission of the light that we can see! As always (when available), the best image comes to us courtesy of the Hubble Space Telescope, and this one doesn't disappoint! 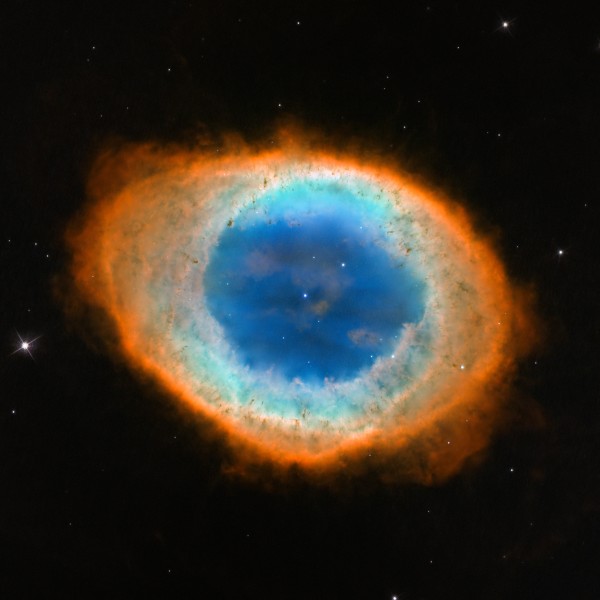 There's actually an older Hubble image available, and thanks to some fantastic analysis by Andre van der Hoeven, you can see that although the nebula hasn't expanded appreciably, some of the background stars have moved slightly over time!

To give you one of the most spectacular views of the evaporating gas globules -- those are the dark little "tadpoles" you can see -- caused by the radiation emitted by this star in its death throes, I've taken the full-resolution Hubble image, rotated it and cropped out a giant slice through it. Enjoy the view!

And I hope you've truly enjoyed one of the most spectacular Messier Mondays of all! Including today's entry, we've taken a look at the following Messier objects:

Come back next week where we'll take a look at another spectacular one of Messier's deep-sky wonders, only here on Messier Monday!

I love this nebula. Its one of my all-time favorite objects in the sky. I especially love the little clumps of dust that are inside it, blown away by the radiation. :)

Beautiful images and great explanation. I was confused on one point. You say "only about 92% of the Universe was made up of hydrogen before it had any stars". I though the ordinary matter part of the universe was about 74% H and 25% He a few hours after the Big Bang. What am I missing?

Depends on whether you count by number of atoms or mass fraction. 92% hydrogen / 8% helium by number, 75% / 25% by mass, roughly, since a helium atom is about 4 times as massive as a hydrogen.

Just for an idea I had for a science fiction story, I'm curious how much matter it would take to fill a light-year radius sphere to about Earth's sea level density, and just what temperatures we're seeing in a nebula like this. Would you be willing to throw out some ballpark figures, Ethan?

nor sure what matter you mean... hydrogen, copper, led, water?
and what do you mean by sea level density? density of air at sea level, or water density of sea?

If you mean a sphere of 1ly R filled with air at 1 bar, then that's easy to calculate.

and for gas volume you can use Boyle's law. pa Va = pc Vc

where (a) denotes atmospheric pressure and (c) compressed pressure. But if everything is at 1 bar.. then the formula is straight forward... 1 bar=101.325 kPa

Hey Ethan,
Just wanted to say thanks for putting the time into all these great messier posts, esp the detailed formation descriptions. Was up camping at 10k ft this week with great clean air, whipped out the 8" scope. After obligatory Saturn (great angle right now), I zipped straight to m57 and man did it pop up there! We then toured around many of the others, and even with my foggy memory of the details I could put together a good story of what each was. So thanks again for these, even if they're mostly unseeable up in the pacific northwest...

yeah.. Saturn is great this year. Last year or two the rings were at 90' and was just a razor line. This is summer they are tilted great. very nice for viewing.

Lovely article. However, you miss one of the grandest images of this object.

Thank you for the interesting article about the beautiful Ring Nebula. - Do you know what are the dark globules made of? It is clearly made by a more dense matter. Can it be remains from planets or are they created by the explosion?

Looking foreward for your answer.