"Cross that rules the Southern Sky!
Stars that sweep, and turn, and fly
Hear the Lovers' Litany:
'Love like ours can never die!'" -Rudyard Kipling

Welcome back for yet another Messier Monday, where we choose one of the 110 deep-sky objects making up Charles Messier's 18th Century catalogue to highlight in detail. Originally designed as a catalogue to help comet-hunters avoid potential confusion with faint, fuzzy objects, this now serves as a wonderful collection of star clusters, nebulae, stellar corpses, globular clusters and galaxies, among others. 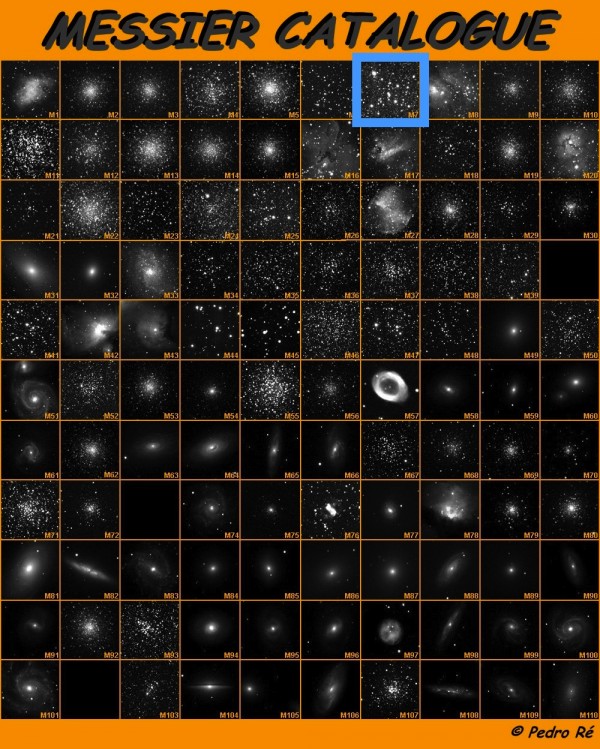 This catalogue, though spectacular for observers at high-to-modest northern latitudes, is limited in how much of the sky it covers. If Messier were situated at the equator when he did his observing, he could have, in principle, viewed the entire night sky over the course of a year, while if he were at the north pole, there's no way he could have seen any more than 50%, missing the entire southern half of the celestial sphere.

In reality, Messier did his observing from Paris, France, which has a latitude of about 49° North. In astronomy, the equivalent of latitude is known as declination, when it's applied to objects in the heavens (as opposed to on Earth), while longitude corresponds to what's known as right ascension.

Because of Messier's high northern latitude, a large portion of the skies visible from the Southern Hemisphere were completely inaccessible to him: about the lowest 20%, by area. In fact, the lowest declination of any Messier object is -34.5, which belongs to Messier 7, our object for today. Only visible, even in principle, to those of you who live South of about 55° N latitude, here's how you can find it. 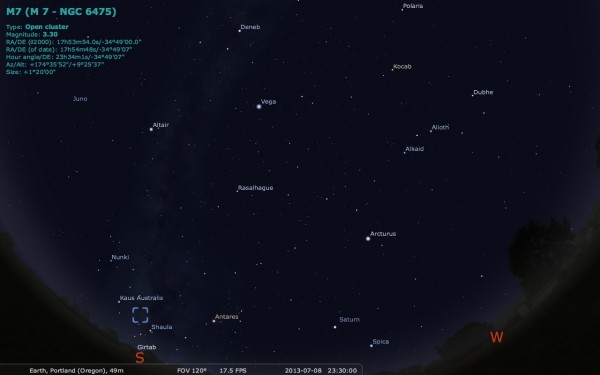 Only because we're still very near the Summer Solstice, the constellation of Sagittarius still reaches its apex above the southern horizon around midnight; in another few months, that characteristic teapot asterism will be much more difficult to find. But you can navigate to it either from the Summer Triangle or the Big Dipper, and if you can find the teapot, you'll be able to find your way to the bright object Messier 7, known as far back as Ptolemy in the year 130! 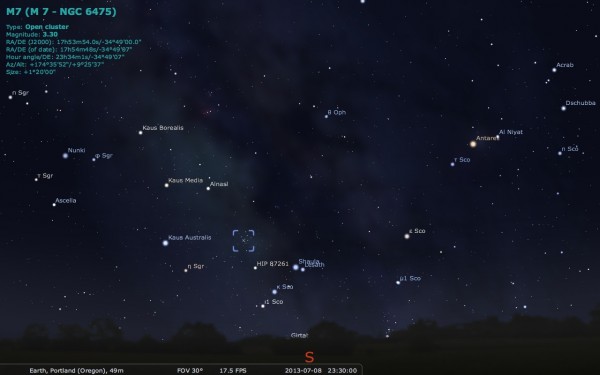 Messier 7 stands out even to the naked eye -- if it gets high enough above the horizon -- as a bright cluster of stars to rival the Pleiades, located just to the west of Kaus Australis, the base of the teapot closest to the spout and the brightest star in Sagittarius. Although technically Messier 7 is next door in the constellation of Scorpius (and just to the East of the equally bright star Shaula), I always have an easier time finding it by navigating from the teapot; unlike the Pleiades, M7 is silhouetted against almost the dead center of the galaxy, which means a glittering, diffuse backdrop of stars to compete with! 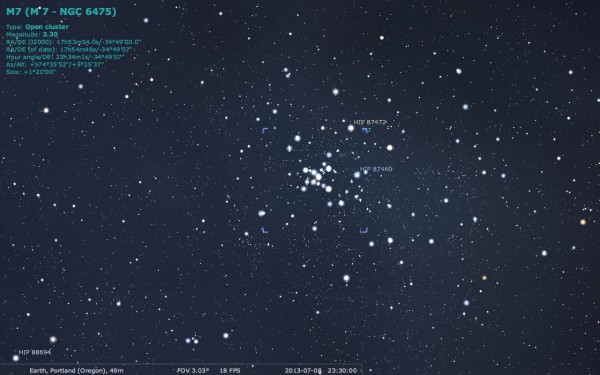 Image credit: me, once more, with Stellarium.

But unlike the center of the galaxy, which is about 25,000 light-years away, Messier 7 is a relatively close 980 light-years, according to our best estimates. Since it takes up about 1.3 degrees in diameter on the sky, that places it at about 25 light-years across in size. 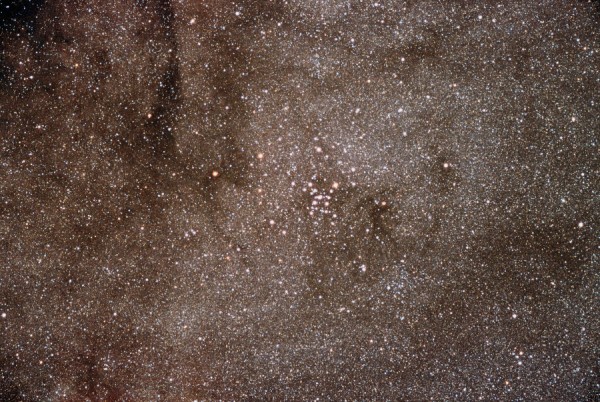 And at that distance, the relatively young stars -- including a sizable number of mid-brightness B-class stars -- are actually visible to the naked eye under good skies, although they're far more prominent the farther south you go. In astronomy, we rank how bright things appear to be by visual magnitude, where lower numbers mean brighter objects; anything less than +6.0 is visible to the naked eye under very good (moonless nights, far away from cities, no lights on nearby, etc.) conditions. Early estimates of this cluster were all made from mid-Northern latitudes, where values ranged from +4.1 to +5.0. 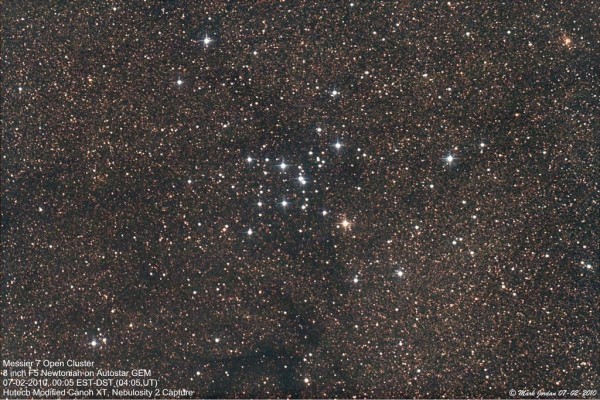 But because Messier 7 is only visible when it's close to the horizon, there's a lot of atmosphere for that light to travel through, meaning it appeared redder and dimmer than it actually is. It's actual apparent magnitude is just +3.3, making it the second brightest (behind the Pleiades) of all Messier objects! 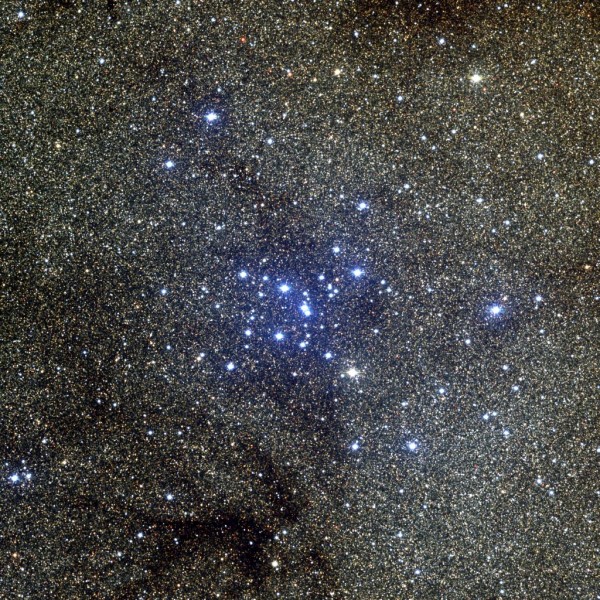 The yellow giant star just below-and-to-the-right of center in the image above is the brightest in the cluster: a yellow giant that's entering the final stages of its life. Based on that star and the color of the brightest main-sequence stars remaining in this cluster, we can determine that this cluster formed just a smidge over 200 million years ago. 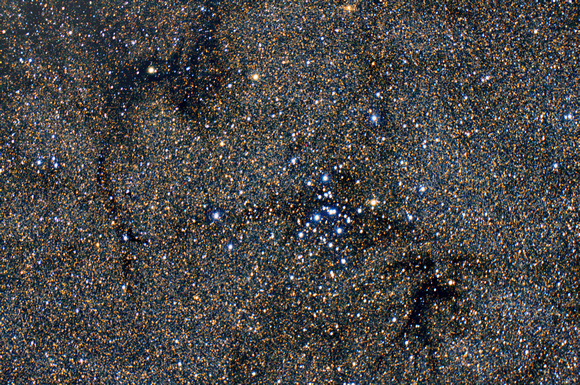 Perhaps most interestingly, these stars contain, on average, almost the same exact ratio of iron-to-hydrogen as our Sun, which is a good indicator that it's likely to have many stars with similar rocky planets to Earth in there! 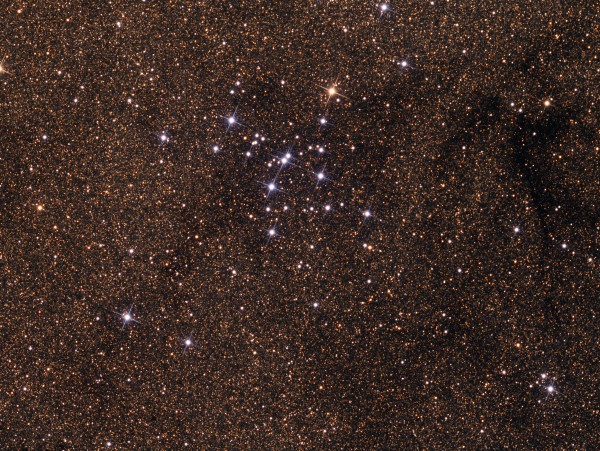 Although we know that there are about 80 stars with a visual magnitude of about +10.0 or brighter, the total number of stars in this cluster is still unknown, but is expected to be at least a few hundred. We do have an estimate of the mass of this cluster, and that comes in around 735 times the mass of the Sun, which helps us guess the number of stars in there without an image sophisticated enough to count them. (Although Rolf Olsen's is pretty impressive!) 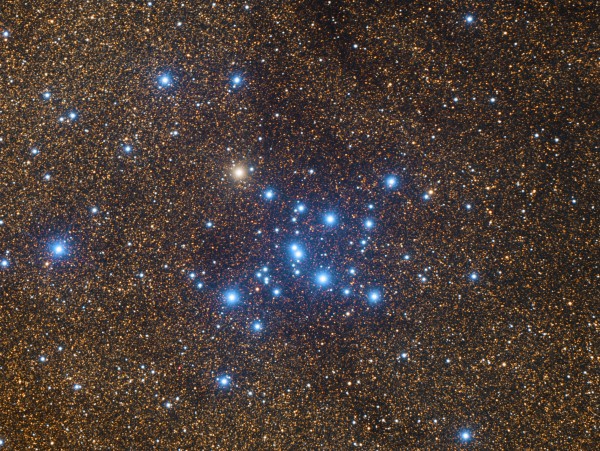 It's a daunting task to count them, it really is! After all, when you take a look inside at the two highest-resolution photos I've been able to track down, once you get past the bright, blue stars, it's an incredibly difficult (and thankless) task to determine which stars are small, dim and red and part of this cluster, and which ones are background stars just a part of the galaxy? Whether you look at Rolf Olsen's image, 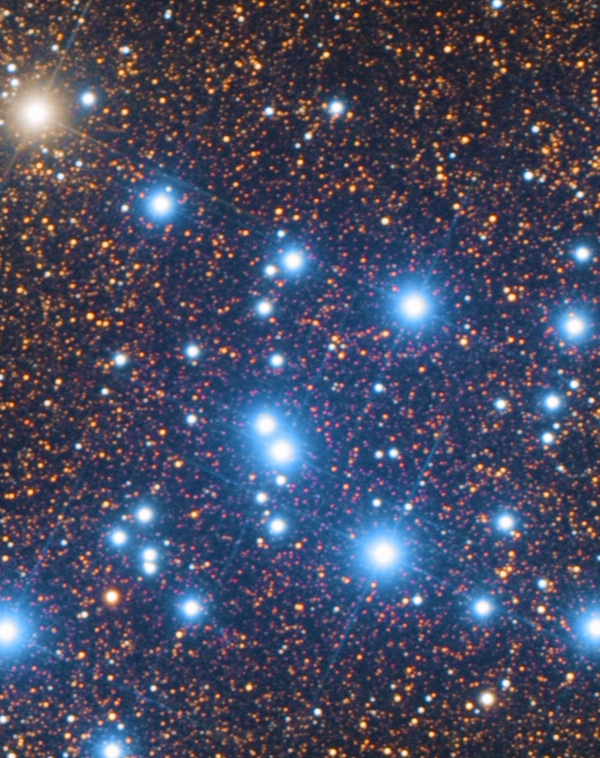 or at the slightly higher-resolution image of N.A. Sharp and NOAO, 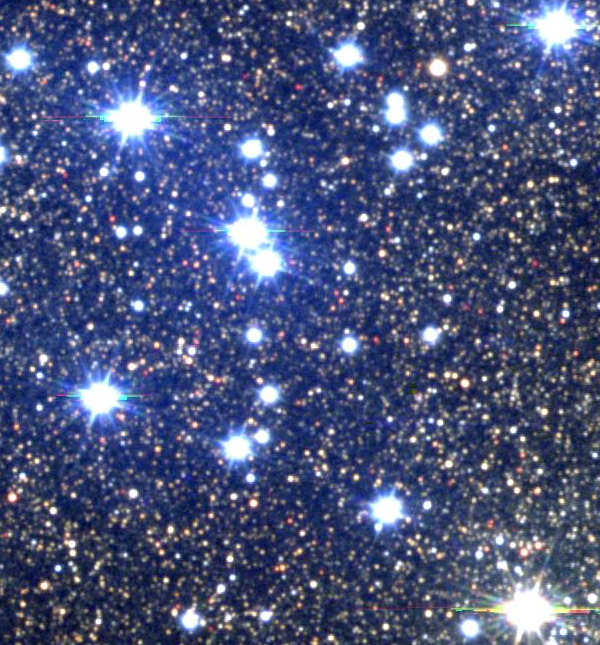 you really get a feel for what a monumental accomplishment counting the number of stars truly belonging to this cluster will be! It'll be a feat nearly 2,000 years in the making; Messier 7's (sometimes) colloquial name is simply Ptolemy's cluster!

And with that, we come to the close of another Messier Monday. Including today’s entry, we’ve taken a look at the following Messier objects:

Come back next week (unless you can make this weekend's star party with me) where we’ll take a look at another of Messier’s deep-sky wonders, only here on Messier Monday!