Weekend Diversion: The Edge of the World

"Let us leave this place where the smoke blows black
And the dark street winds and bends.
Past the pits where the asphalt flowers grow
We shall walk with a walk that is measured and slow,
And watch where the chalk-white arrows go
To the place where the sidewalk ends." -Shel Silverstein

No, there's not really an edge to our world, but if you've ever been to the ocean shores, you might know that feeling I'm talking about. The smell of the salt water, the wind gusting in from the sea, the sandy beaches and rocky outcrops slowly losing ground to the relentless waves; it's one of the most universally experienced type of wild place we have on this planet. Thinking about this might help you not only relate to Miho Hatori & Smokey Hormel's dreamy song,

Ocean In Your Eyes,

it might also help you appreciate the unique sights of Slope Point, New Zealand. 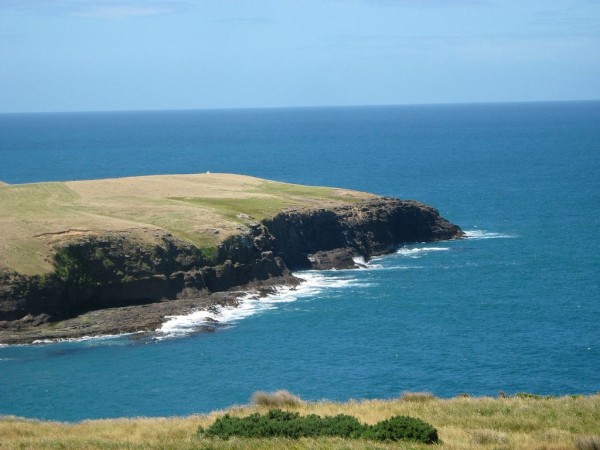 The southernmost point of the south island of New Zealand (not to be confused with the more southerly Stewart Island), Slope Point is closer to the South Pole than it is to the equator, and is quite possibly one of the most unique places on Earth. 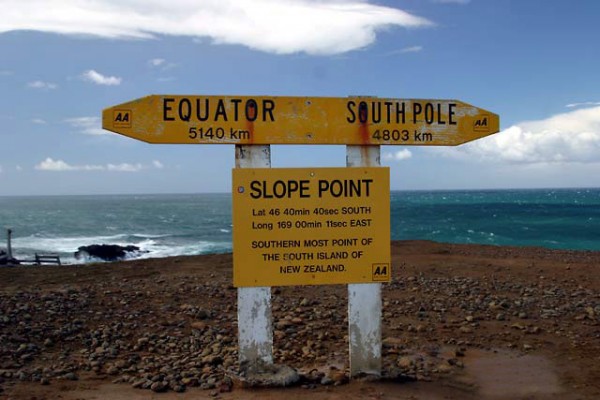 Although it's thousands of kilometers to Antarctica, the prevailing winds blow northwards (inland) from the shores of Slope Point, and they tend to blow furiously. 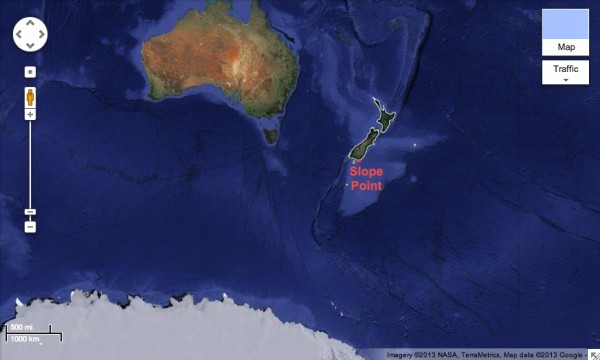 And moving inland from the shores of Slope Point, you'll find the typical sights of rural New Zealand: grazing flocks of sheep, the rare human, and acre after acre of grasslands. 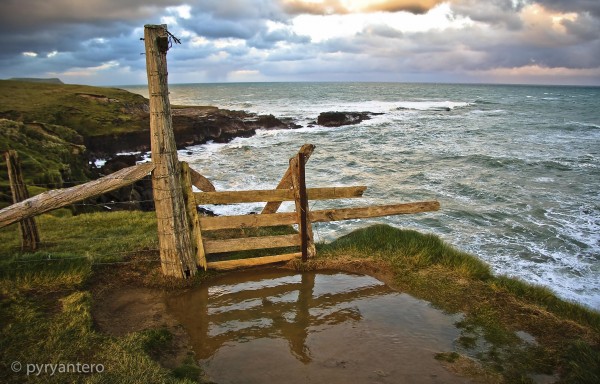 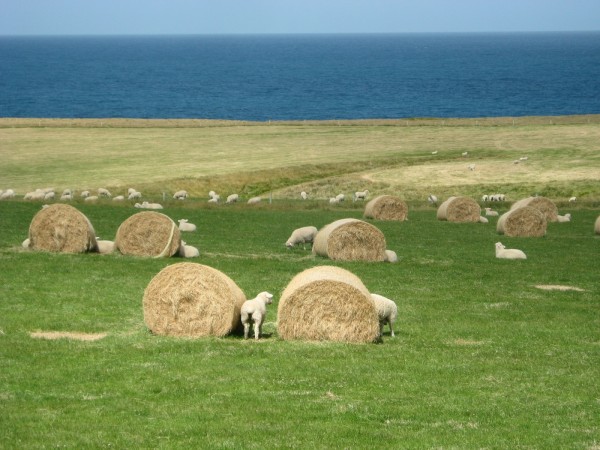 But the part that makes it feel like it's the edge of the world?

That has got to be the bizarre, windswept trees, something I've never seen anything akin to, even in among the greatest forests in the world. Have a look for yourself at the best images -- below -- that I've been able to find of this amazing natural splendor! 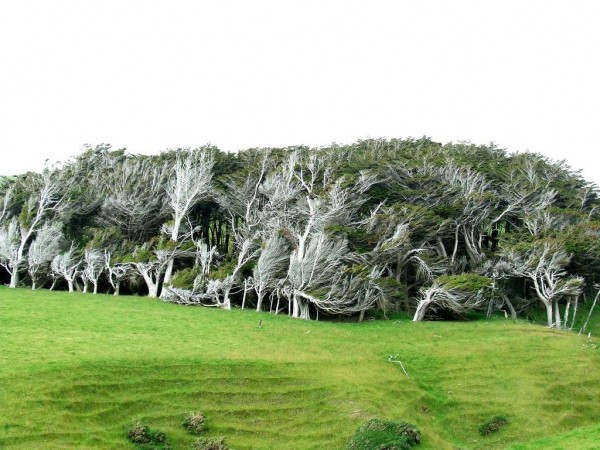 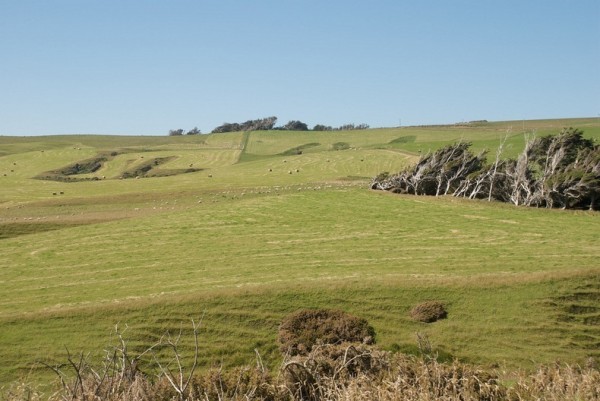 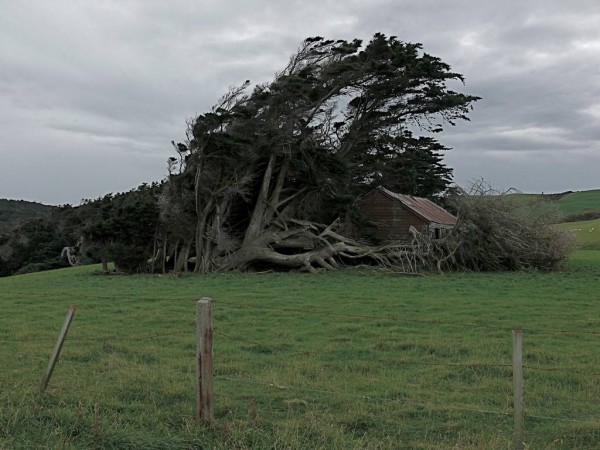 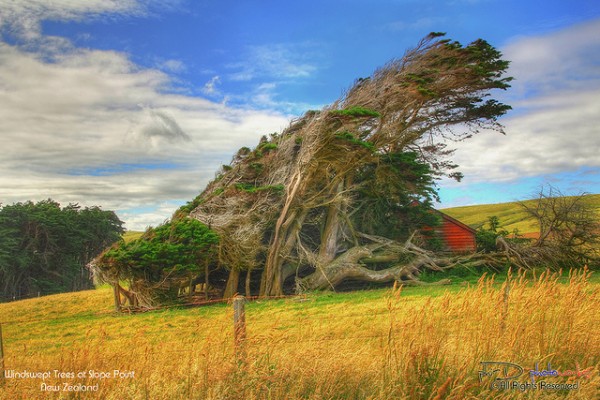 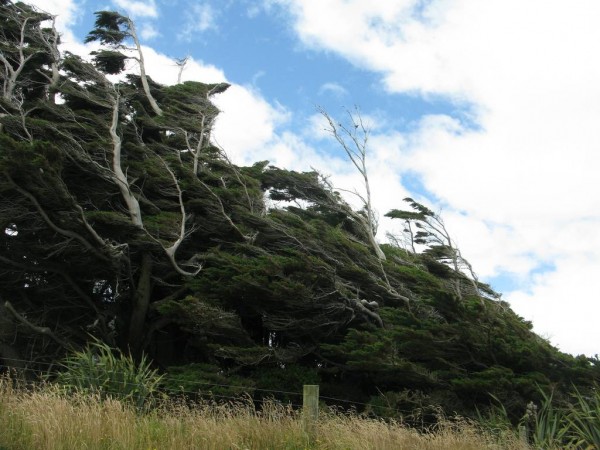 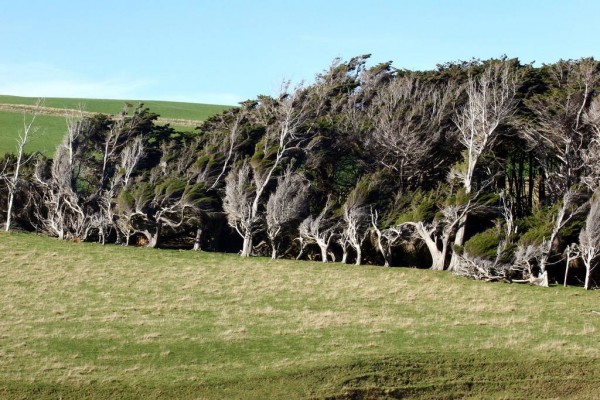 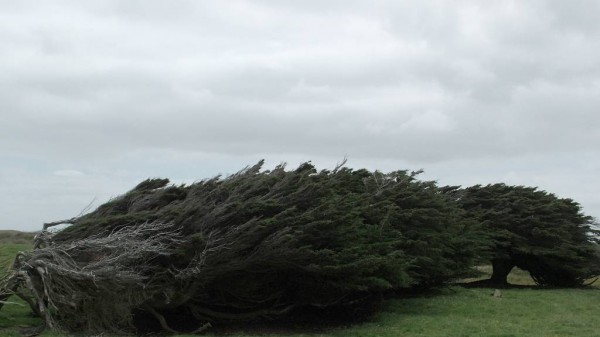 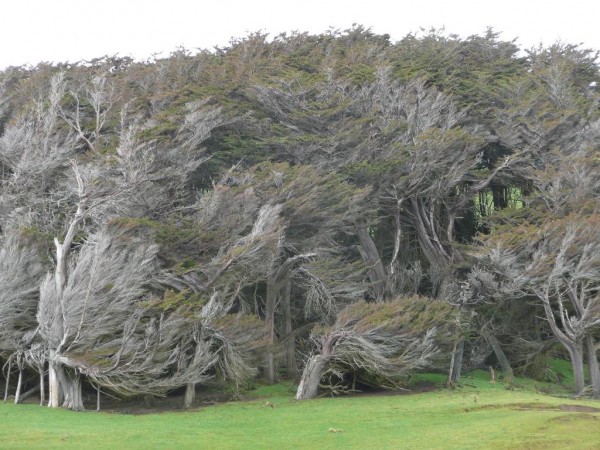 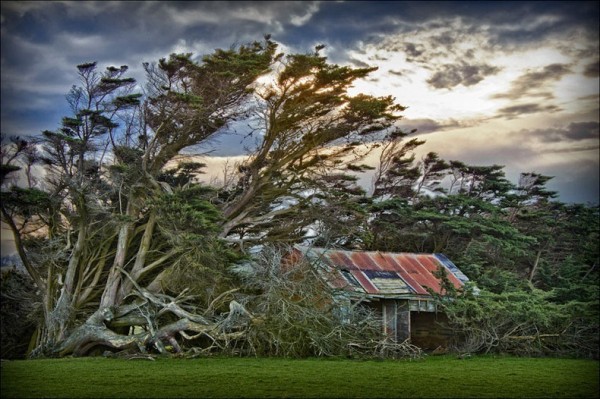 Thanks to kuriositas for first bringing this onto my radar, and hope my kiwi readers among you can chime in with a little more info about this spectacular natural wonder! Have a great weekend, from whatever edge-of-the-world you're reading from!

It's my understanding that the windswept effect you see in the pictures (and in places like Cascade Head and Cape Meares near your locale) is a function of differential growth, not being bent by the wind.

As an American who moved to New Zealand a few years ago, I can confirm that there are quite a few unique parts of this country that constantly pop-out every time I take a break and hit the back roads. Slope Point is yet another.

Yes, there really is an edge to our world.

If you were a mole, you would know it.

My wife and some friends rarely fail to express their gratitude to me for making them walk there in a howling southerly with rain pounding into their faces.
And a fraction north are the Caitlins, a fantastic area of seashore with a great variety of natural type things

New Zealand is a place of stunning beauty, though I've only ever seen pictures. But as for the sea shore being the edge of the world, I grew up sailing with my late grandfather off the coast of New England. The shore has always been little more to me than where the dock is and the open sea under full sail makes you feel the universe is yours to explore.

Contrary to the popular belief, the world of course does have an edge. Just take a look at the cliffs of the Telascica nature park Croatia (Google images of it), or better yet, visit!
:-)

Really Ethan? This looks unique to you? You need to get out more, and take a drive along Hwy 101. You'll see lots of trees like this along the Pacific Coast. It's a normal, natural consequence of growing with a steady prevailing wind and salt spray.