"Do not look at stars as bright spots only. Try to take in the vastness of the universe." -Maria Mitchell

It's time again for Messier Monday, where we highlight the various wonderous deep-sky objects of the night, and show you how to find them against the expansive backdrop of stars. The (almost) full Moon is out tonight, polluting your night sky with as much light as a large-sized urban area, but that doesn't mean all of the 110 deep-sky objects that make up the Messier catalogue are off-limits! 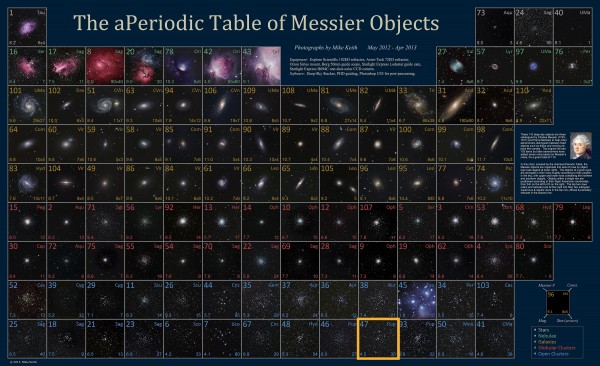 While extended objects -- like planetary nebulae and galaxies -- may prove more of a challenge, collections of stars within our own galaxy and galactic neighborhood (like open star clusters and globular clusters) are perfect targets on a night like tonight, even with the severe light pollution brought on by the full Moon! While the Messier catalogue boasts 110 total objects, five of them were declared missing for a long time because of various minor errors.

In the case of today's object, Messier 47, there was a sign error in one of the coordinates he recorded that went unresolved until T.F. Morris found the correct object (and position) in 1959! Let there be no more confusion; here's how you can find this deep-sky wonder for yourself. 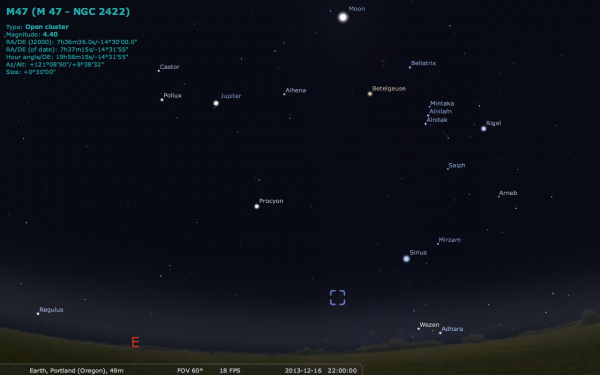 Even with the full Moon out tonight, the great winter constellation of Orion is easy to spot, rising in the east at dusk and passive over the southern part of the horizon as the night goes on. Behind it, the brightest star in the night sky -- Sirius -- rises a little later, followed by other stars familiar to winter skywatchers. Well, if you can find Sirius and the somewhat dimmer Mirzam near it, they'll point your way to Messier 47. 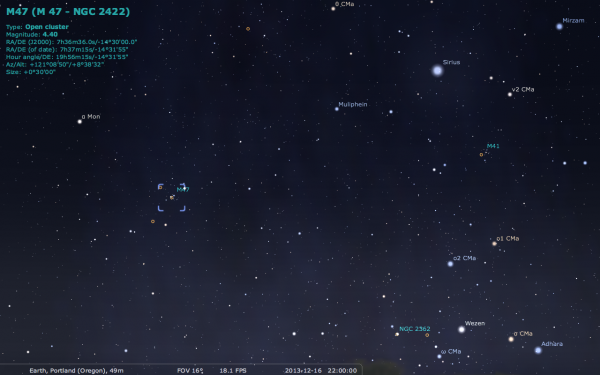 Even in a light-polluted sky, the imaginary line from Mirzam to Sirius will have you running into another naked-eye star in short order: the fourth-magnitude Muliphein. If you continue on in a straight line the same distance again from Mirzam to Muliphein, you'll come to a place with a large number of stars at the limit of naked-eye vision; the imaginary line connecting the slightly more southerly bright pair Adhara and Wezen would meet there as well.

If you train your equipment on this region (at low magnification, for sure), this is what you're likely to see. 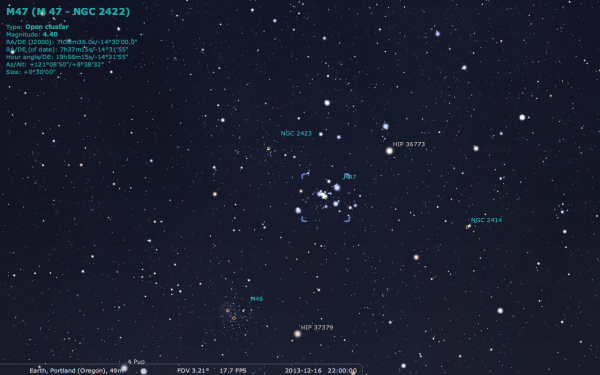 The naked eye stars HIP 36773 (in line with the Mirzam-Sirius-Muliphein triplet) and HIP 37379 (a little below it) bracket today's object -- Messier 47 -- very nicely. But this object stands out on its own, and was likely discovered independently back in 1654 before Messier rediscovered it in 1771, saying:

Cluster of stars, little distant from [Messier 46]; the stars are [brighter]; the middle of the cluster was compared with the same star, 2 Navis. The cluster contains no nebulosity.

While I could be convinced to tell you about the "sister" object of this one (Messier 46) next week, let's take a look inside this week's object first! 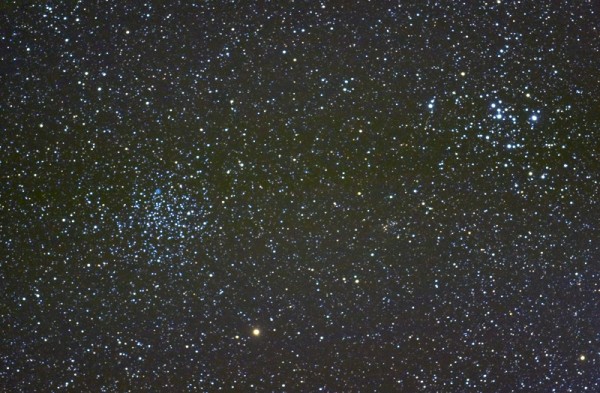 Image credit: Boris Štromar via the hungarian wikipedia; M46 on the left, M47 on the right.

While the brightest star in this cluster is just barely visible to the naked eye at magnitude +5.7, you're much more likely to notice that there appear to be a ton of bright, blue stars through binoculars or a telescope. That's because of a combination of two factors: the youth and the closeness of this cluster. Based on the stars that are still around, this cluster is dated at about 78 million years of age, and is one of the closest Messier objects at just 1,600 light-years distant! 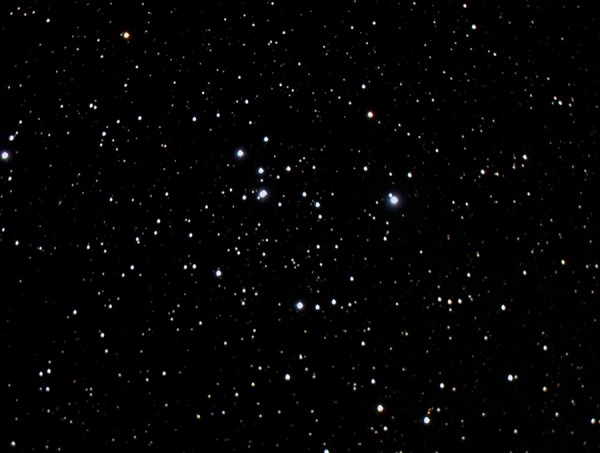 Perhaps surprisingly, this is one of the most diffuse -- or low-density -- open clusters that we know of! Although it's only about 12 light-years in diameter, pretty typical for an open star cluster (and about the same angular size as the full Moon on the sky), there are only about 50 stars in there, somewhat surprising considering that these objects typically contain many hundreds or even thousands of stars! 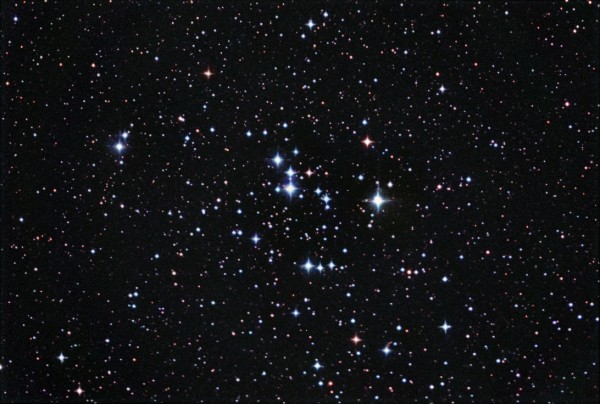 What could be happening here?

Quite simply, the dimmer stars are probably actually there, but incredibly difficult to tease out against the remainder of the galactic plane. Take a look at this deeper exposure to see what I mean. 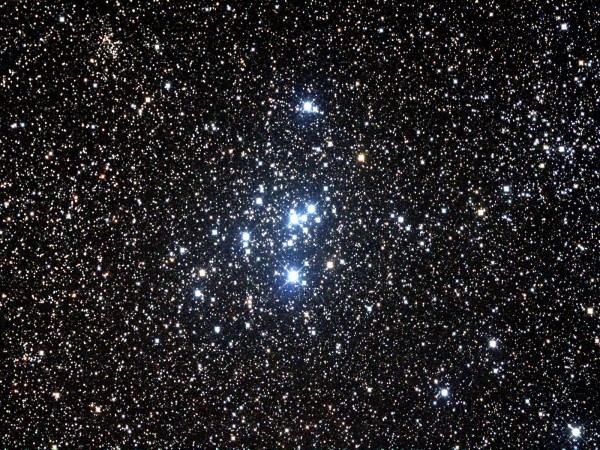 There's no evidence that this cluster is in the process of dissociating, nor that there's an absence of lower-mass stars. What happens -- and this is true for a great many open clusters in the galactic plane, which is where they tend to form -- is that it becomes very difficult to identify how stars are a part of the cluster, proper.

It's too bad, because these bright blue stars are quite the sight! 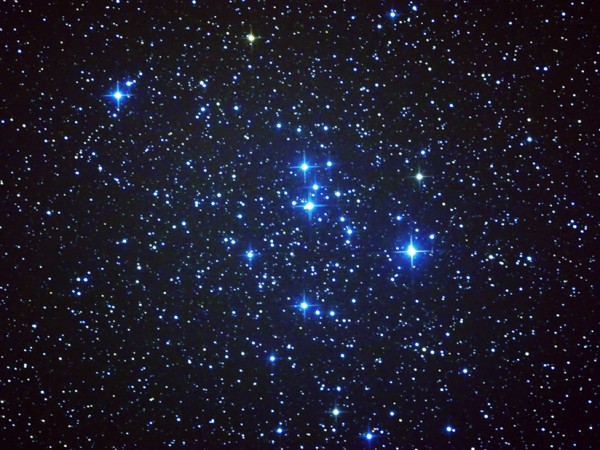 Despite Messier's assertion that there isn't any nebulosity, some images appear to have a little bit, which would be quite consistent with a star cluster of such a young age. You might legitimately be wondering if we could somehow see through that dust -- if it exists -- and whether there'd be a greater number of lower-mass, redder stars than we'd seen otherwise.

Well, that's what looking in the infrared can get you, and guess what we found?! 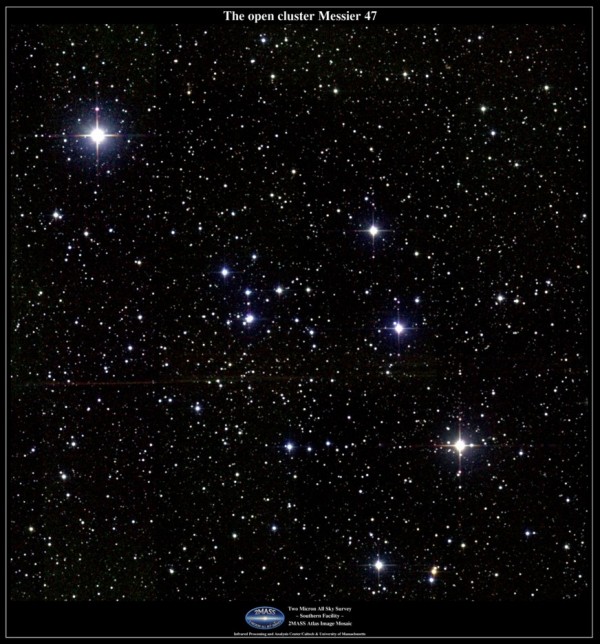 Although it's not yet proven that these stars are associated with the cluster and not the galactic background, there are, in fact, hundreds (and teetering on a thousand) stars in the vicinity of this cluster. Not bad for such a nearby object! That wraps up another Messier Monday, and including today, we’ve looked at the following objects:

Come back next week, where just maybe we'll look at the sister object to this one, and uncover a little more in our investigations of the deep-sky objects visible from Earth. Only here, only on Messier Monday!

Beautiful cluster here - one crowded star-field too although not quite as bad as the Sagittarius star clouds - although those have been the site of exoplanet hunts as noted on this :