“The contemporaries and rivals of Zeuxis were Timanthes, Androcydes, Eupompus, and Parrhasius. This last, it is said, entered into a pictorial contest with Zeuxis, who represented some grapes, painted so naturally that the birds flew towards the spot where the picture was exhibited. Parrhasius, on the other hand, exhibited a curtain, drawn with such singular truthfulness, that Zeuxis, elated with the judgment which had been passed upon his work by the birds, haughtily demanded that the curtain should be drawn aside to let the picture be seen. Upon finding his mistake, with a great degree of ingenuous candour he admitted that he had been surpassed, for that whereas he himself had only deceived the birds, Parrhasius had deceived him, an artist.” -Pliny the Elder, translation John Bostock

For as long as art has been around, people have been using it in innovative ways to try and express something unique and evocative. This weekend, I'm pleased to introduce you to a type of art that's been around for millennia, but that's recently gained popularity in certain parts of the world just over the last few years. Have a listen to David Bowie’s classic,

while you take a look at some fabulous Trompe-l’œil creations!

Using 2-D surfaces to create a real 3-D illusion, some of these out-of-the-box creations are so surprising it took me a while to figure out just how the illusion was created. 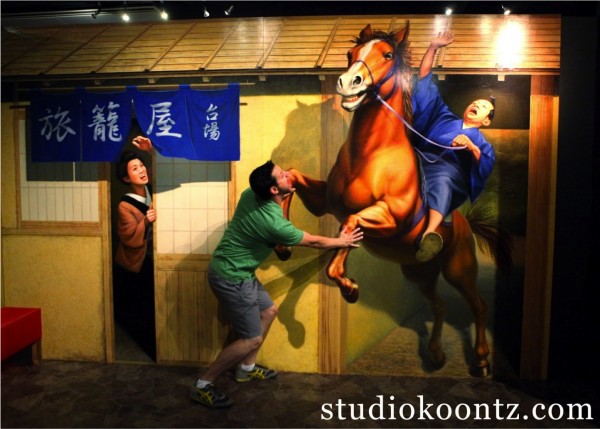 Go ahead and view the entire gallery (and read the whole thing) here!

Interesting creations - thanks. Another kind of nice illusion is something like "Racławice Panorama" in Poland. Take a look:
http://en.wikipedia.org/wiki/Rac%C5%82awice_Panorama
http://www.panoramaraclawicka.pl/?lang=en
And virtual tour:
http://wroclaw360.pl/miejsce.php?q=220