Comments of the Week #27: From the accelerating Universe to our brightest stars

"All you touch and all you see,
is all your life will ever be." -Pink Floyd

It's been another great week exploring the Universe over at the main Starts With A Bang blog, as we've taken on the following topics since our last week:

As always, you've had (and taken advantage) of your chance to have your say here on our forum here, so without any further delay let's dive in to your Comments of the Week! 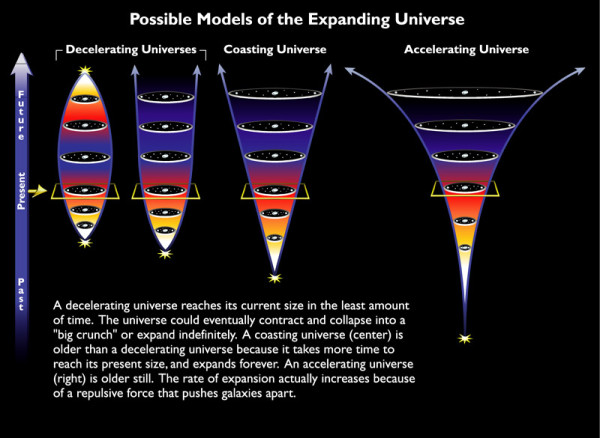 From Azri -- our original question-asker -- on the topic of how long the Universe has been accelerating: "Just when you mentioned that the universe was almost 7.8 billion years old when started accelerating: I think that calculation is based on a "constant” cosmological constant! what if Dark energy was dynamical !? can one expect more than 8 bill years, lets say almost recently!"

But we don't have a lot of wiggle room anymore. 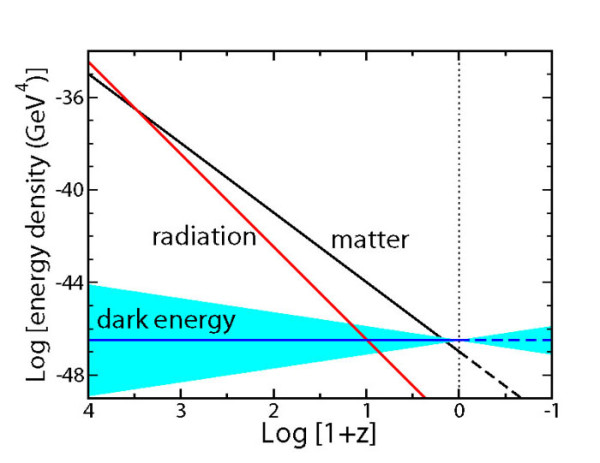 Because we know that dark energy is very close to a cosmological constant (see Ask Ethan #53), the amount of wiggle-room we have is relatively small. Sure, it might have started only 5.3 billion years ago, or perhaps as long ago as 6.9 billion years, but because dark energy's equation of state is so well-known, which is going to get better and better as BAO and SnIa data continues to accumulate, we can't really say that the Universe began accelerating after the formation of our Solar System; that's ruled out.

Science is amazing because it admits all possibilities in theory, but it's the observations we make and the experiments we perform that tell us exactly what the Universe we live in is like. In this case, the distant galaxies stopped decelerating and began accelerating approximately 6.1 billion years ago, with an uncertainty of only 0.8 billion years. 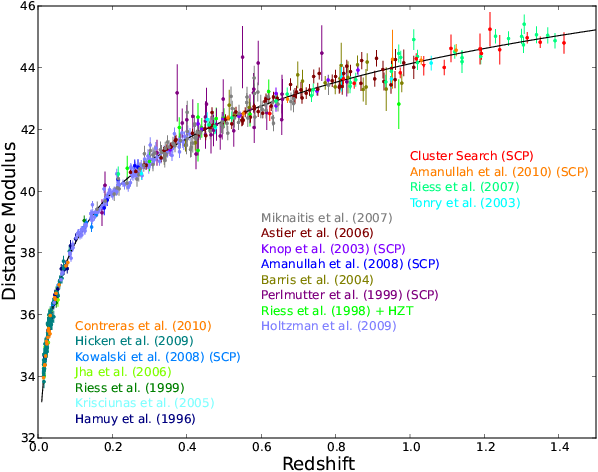 From Donald Airey on the same topic: "Ethan, you almost had it. What if the universe has always been accelerating since the moment of inception? What kind of galactic structures could be build in 211 Gyr?"

Unfortunately, the idea of an always accelerating Universe is completely ruled out by observations. You see, when you look out at a distant galaxy, you're well-aware that you're not observing that galaxy as it is today, but rather as it is today minus the light-travel-time it took to reach us. What you might not realize is that for every distant galaxy we look at, we learn all about how the Universe has expanded ever since that light was emitted.

It's an interesting idea, but one that when you begin to explore it in detail, falls apart as a plausible physical explanation for our Universe. Don't be chagrined at this; this is true for most physical ideas!

From Alan L. on last week's comments of the week, where I asked about ideas for a video series I want to put together: "Okay for the solar flare and Mercury phenomenon thingy, but please, no funny shaped clouds or minor stage magician tricks involving bottle tops."

You know, what I'd really love to do is tell the story of what we know and how we know it, interspersed with the basic physical principles that we've uncovered that underlie it. But I have a feeling that people aren't going to watch it (or, more to the point, fall in love with it) unless there's a hook with widespread appeal. That's what I'm looking for. If you have ideas for how I could better do that, let me know! I'm not too proud to go in a different direction if a superior idea comes up. 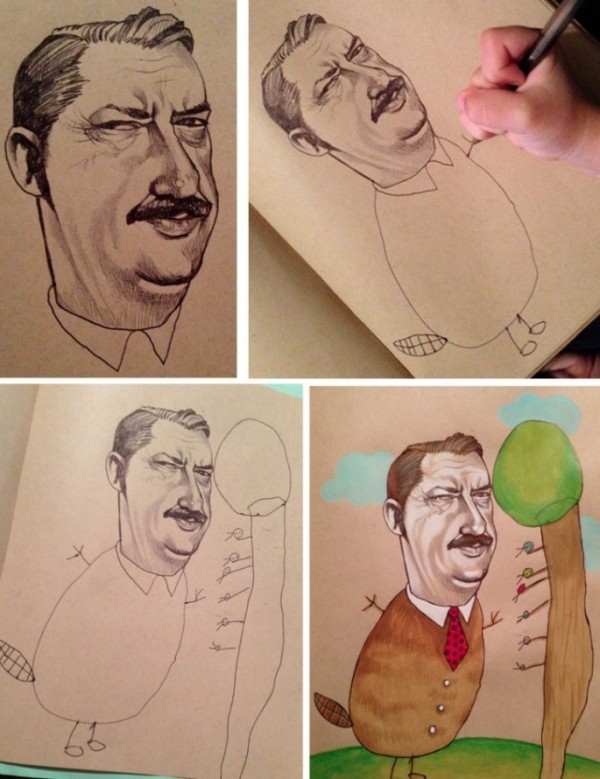 From PJ on the topic of Sharing Your Art: "Love the concept of sharing – should be more of it."

It's very hard to give up creative control of something you're used to creating yourself, but it's often a risk you need to take if you want something to become greater. I think it's a universal struggle among humans that we struggle with, but when we have the courage to give up control, although the catastrophes are often greater, so are the successes, especially when things work out right. It's worth giving a shot to! 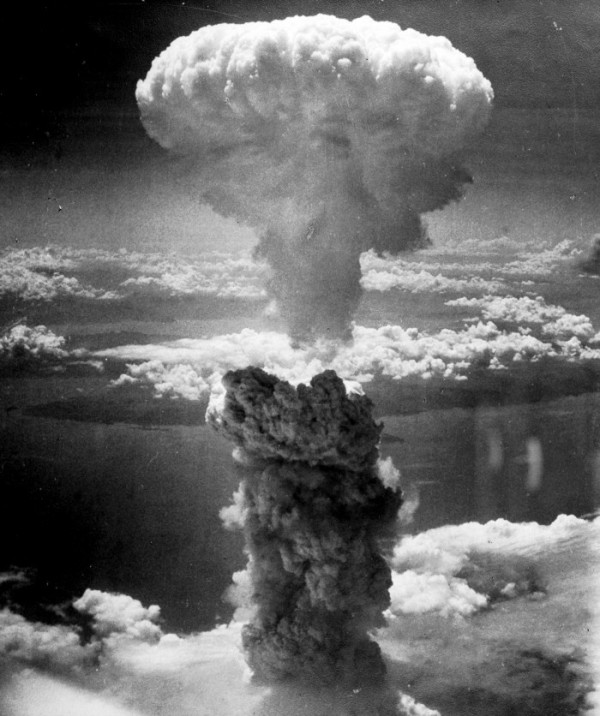 I always hate reducing human lives to simple numbers, as I think it dehumanizes us all to think in that fashion. But since you insist, the 2004 Indian Ocean tsunami was certainly one of the most devastating natural disasters in history, causing the estimated death of 230,000 people. But the total historical death toll from nuclear weapons -- and I'm only counting the bombings on Hiroshima and Nagasaki -- are estimated at: for Hiroshima, between 90,000 and 166,000 directly, for Nagasaki, between 60,000 and 80,000 directly, and from radiation poisoning over the longer term, about 1,900 total. So we're looking at somewhere between 152,000 and 248,000 deaths from nuclear weapons.

My statement about nuclear weapons, for reference, was "Nuclear war, for one, which resulted in the death of more human beings all at once — wiping out an entire city in a single stroke — than any other disaster (natural or otherwise) in recorded history." A careful accounting seems to indicate that this statement may be true, but I should perhaps be more careful (and more quantitative) moving forward. 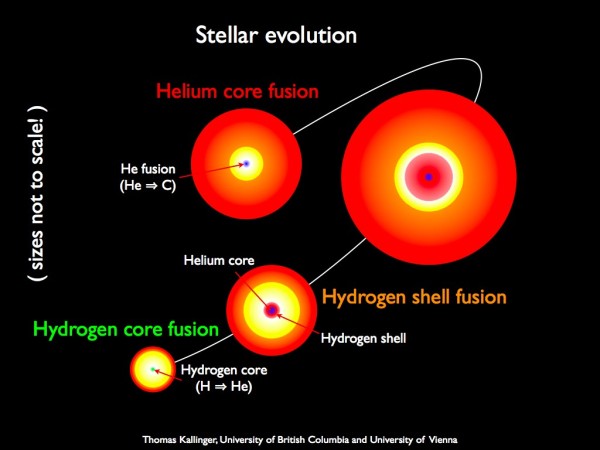 And finally, from Omega Centauri on the ten brightest stars in the sky: "Is there a mass limit for Helium burning? I.e. below some limit the Helium core won’t ignite at all? Presumably if there is one, no stars have yet evolved to the point where this has happened (or not happened)?"

There is such a limit! The problem is simple thermodynamics, so let's lay that out. Inside of every star, the temperature is high enough to fuse lighter elements into heavier ones. Very slowly, stars convect, meaning the hotter material from inside the core -- including fused material -- migrates out of the core, while the cooler material from the outer layers sinks inwards. The lower-mass stars wind up doing this effectively over tens-to-hundreds of billions of years, while Sun-like stars won't, as convection only takes place in the outer layers. In the most massive stars, it's only the inner core that convects!

When the core runs out of fusible fuel, it contracts and heats up adiabatically. One of two things is going to happen first:

In the case of stars like our Sun, when we're done with hydrogen, it's option #1, as we'll start burning helium in short order. But if you're below about 40% the mass of our Sun, you'll hit the Pauli limit first, and so you won't reach helium-burning. This is theorized to be the transition between K-class and M-class stars, and corresponds to a stellar main-sequence lifetime of around 180 billion years. So no, that hasn't happened yet in our Universe!

Thanks for a great week of questions, comments and conversation, and I'll see you back here soon for more mysteries of the Universe!

As you have taken the Arcturus image from my New Forest Website you will know - as it is clearly written on there - that you have done so illegally and without my permission. Remove my image immediately from this site.

No problem; it's down and happily replaced with an image that's not yours. Don't worry; I won't be using images from you again, ever.

Prof, it would have worked just as well to let Ethan know it was replicated without permission and ask that it be removed.

Ethan would have apolgised and given the reason for the confusion and removed the work and conversed offline about a method for clearing works in the future if they appear to hold a valid need to be used.

If Ethan had refused or claimed something in defence obviously wrong, then you would be justified getting shirty over it and nobody would think another thing of it.

Starting off at an 8 when you should be starting off on level 2 or lower isn't a good way to make people interested in your site or work.

Just a word to the wise.

When it comes to weapons, there's a huge difference between people dying because of an unfeeling process, another if it's by deliberate attempt.

The death toll by nuclear fallout is a different class to death by tsunami.

Interesting that the Prof has a statement on his site:-
'Be sociable, share'
PHUTTT !