Everybody Wants to Rule the Quantum World (Synopsis)

The biggest, most surprising revolution that came along with the development of quantum theory, quantum mechanics and later, quantum field theory, was the overthrowing of the idea of a deterministic Universe, replacing it with a Universe where only a probability distribution of outcomes could be theoretically known, even if you knew all the initial conditions of a system.

But one of the most intriguing concepts to come along with this was borne out through Niels Bohr's Copenhagen Interpretation, which gives central importance to the observer, a huge change from the classical world, where the observer is merely an onlooker, watching but not influencing the outcome. This, in particular, really resonated with Tears for Fears' cofounder, Roland Orzabal, with whom physicist Paul Halpern conducted an exclusive interview:

It resonated with me, the suggestion that the person doing the experiment influences the outcome, that the outcome is influenced by what the experiment is indeed trying to prove. It seems to make more sense to me, that our view of the world directly influences and interferes with the world around us, as opposed to the suggestion or feeling that we are mere cogs in an unfeeling machine. 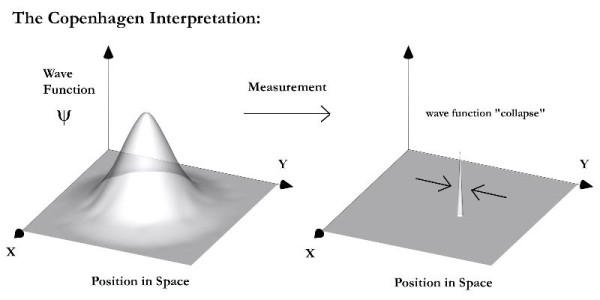 Go read Paul's entire piece, and get a fascinating insight into the intersection of music and quantum physics!

What is a wave function and why does it collapse?

where can i find out more about a deterministic model of the universe vs the model where only a probability distribution of outcomes could be known?
this is quite intriguing.
14215935

One thing about the quantum world that has always intrigued me is the inverse relationship between wavelength and the energy of a photon. Apparently, there is a limit to how much energy a single photon can carry. We have gamma rays at wavelength of 10^-12m, but if we go smaller, they become "cosmic" rays, at which point physicists are apt to call them "particles".

Anyway, what is the limit to wavelength? Why can't there be a photon of, say 10^-75m wavelength?

@3: no AFAIK there is no hypothetical limit to wavelength (but see my last note below). Part of your confusion stems from naming conventions, which have some historical oddities about them. "Cosmic" refers to the fact that those rays were observed to come from the sky, and does not refer to wavelength. In fact we now know that the majority of what was originally called "cosmic rays" are particles not photons, so the wavelength question doesn't even apply to them. But, we are stuck with the label as a matter of historical convention, so 'cosmic rays' they are. The same sort of weird convention confusion is true for gamma and x-rays: these names do refer to a range of wavelengths, but the ranges overlap because the names also refer to whether the photon arises from nuclear decay (that makes it a gamma ray) or some non-nuclear process (that makes it an x-ray). And of course "x-ray" now has a vernacular meaning too, so if you go to a dentist's office and get a picture of your teeth taken, it will be called an x-ray regardless of its source.

So, on to wavelength limitations: while AFAIK there's no hypothetical limit to wavelength, above a certain energy a photon can - in the presence of atoms - spontaneously convert into particle-antiparticle pairs, which can then annihilate to create a pair of photons of lower energy. This might (but I don't know if it does) result in a practical limit on the wavelengths we expect to observe in nature.

I agree with you that the introduction and the development of the quantum theory helped us to better perceive that we have a long way to go, but the pace of our understandings of the universe in the past five decades, support the idea that we will eventually discover all the rules of our deterministic Universe.

I admired you and enjoyed reading your previous posts on global warming issues and concerns and request to kindly write more on this definitely deterministic issue on the occasion of the "THE EARTH DAY".

You have it precisely backwards. The more we investigate into quantum mechanics, the more it looks like the universe is not deterministic. During the development of QM, one of the ideas that physicists had at the time was that there were "hidden variables" that could account for the seemingly random behavior of quantum systems. To give an analogy, if you flip a fair coin, the side that the coin lands on seems to be random. However, that's because we lack sufficient information about the initial velocity and rotation speed of the coin. If we knew these "hidden variables" to a greater precision, we would be able to predict the side that the coin will land on.

In similar vein, it was believed by some scientists that, while the behavior of quantum particles was seemingly random, there were actually factors that we just were not able to account for well enough, ie. hidden variables, and that the particles' behavior was actually deterministic. We now have experimental proof that there are no hidden variables. The proof is a bit complex, but nonetheless valid. Google "Bell's Inequality" for more information.

When two teenage boys ruled the quantum world back in the 80's Lisa was created simply by observing her measurements.

"You guys created me, I didn't come from anywhere. Before you started messing around with your computer, I didn't even exist. By the way, you did an excellent job. Thank you. "

I'm just glad Orzabal didn't become a teacher. No offense intended to teachers but the work Orzabal put out as a songwriter is really impressive.

His songs can be stripped down to nothing but a guy and a guitar.

...or done elegantly with strings

...and it all sounds phenomenal because the underlying songwriting was so great. It is fun to know he shares an interest in theoretical physics but I'm glad he chose the path he did. If Einstein had never existed then sooner or later someone else would have figured out E=mc^2, but if Orzabal had never been a songwriter then we'd never have those works.