Could a new type of supernova eliminate dark energy? (Synopsis)

"It's everywhere, really. It's between the galaxies. It is in this room. We believe that everywhere that you have space, empty space, that you cannot avoid having some of this dark energy." -Adam Riess

Back in the 1990s, scientists were quite surprised to find that when they measured the brightness and redshifts of distant supernovae, they appeared fainter than one would expect, leading us to conclude that the Universe was expanding at an accelerating rate to push them farther away. But a 2015 study put forth a possibility that many scientists dreaded: that perhaps these distant supernovae were intrinsically different from the ones we had observed nearby. 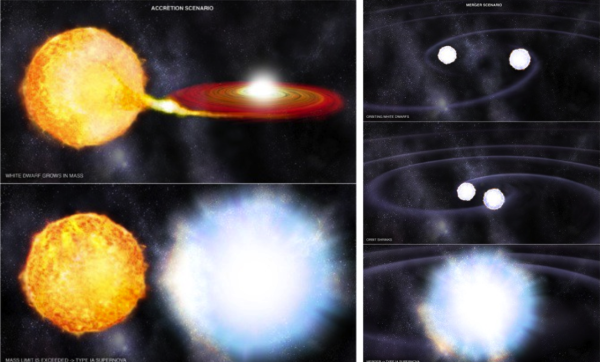 Two different ways to make a Type Ia supernova: the accretion scenario (L) and the merger scenario (R). These may be fundamentally different from one another. Images credit: NASA / CXC / M. Weiss.

Would that potentially eliminate the need for dark energy altogether? Or would it simply change ever-so-slightly the amount and properties of dark energy we required to explain modern cosmology? 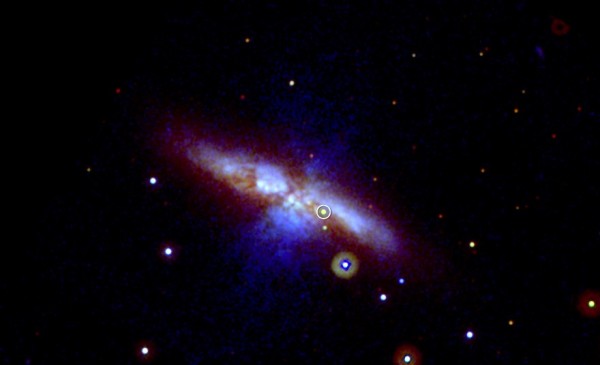 A Type Ia supernova in the nearby galaxy M82. This one is fundamentally different from the one atop this page, observed in 2011 in M101. Image credit: NASA/Swift/P. Brown, TAMU.

Come get the full answer to what the discovery of a new type of Type Ia supernova means!

Ethan, could you please provide references for statements like "a 2015 study put forth a possibility that many scientists dreaded?" I read the article on Forbes, and I couldn't find the reference there, either.