Could You Travel In A Straight Line In Space And Return To Earth? (Synopsis)

"For once you have tasted flight you will walk the earth with your eyes turned skywards, for there you have been and there you will long to return." -Leonardo da Vinci

The Universe is an awfully big place, but how certain are we that we couldn’t travel in a straight line for a very long time and simply return to our starting position? Just because we can travel through the Universe for an arbitrarily, perhaps infinitely long distance-or-time, doesn’t mean the Universe itself is infinite. It’s quite possible that it closes in on itself, and that any straight-line path will eventually return you to your beginning. 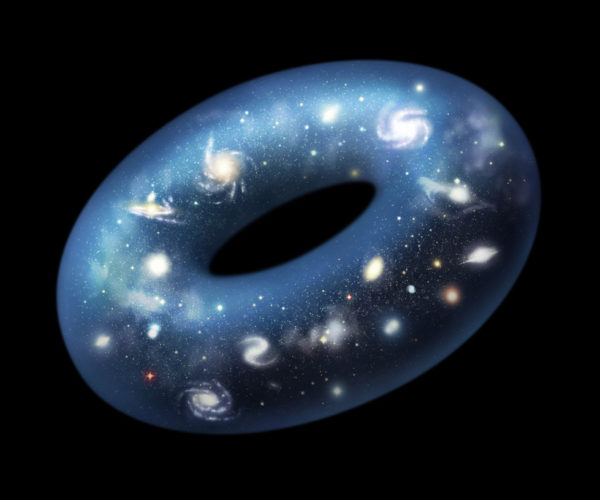 In a hypertorus model of the Universe, motion in a straight line will return you to your original location. Image credit: ESO and deviantART user InTheStarlightGarden, under a c.c.-by-s.a. 4.0 license.

If we wanted to test this possibility, there are a few ways to do it. The best would be to look for repeating structures at a specific distance in the Universe. While we wouldn’t recognize a younger version of our Milky Way, the large-scale structure or the cosmic microwave background would exhibit correlations if the Universe repeated on the scale of what’s observable to us. 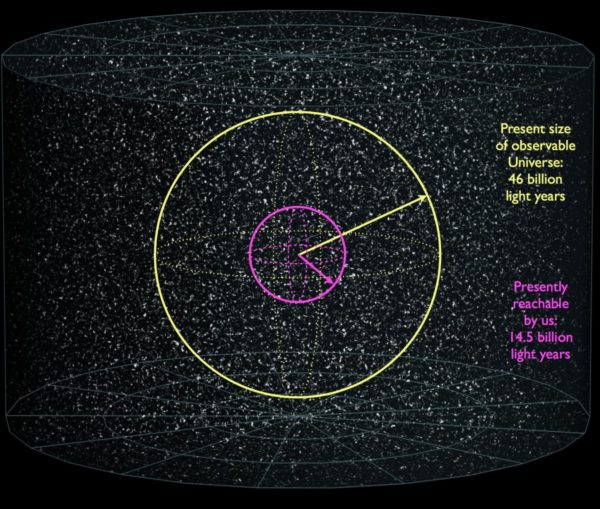 The size of our visible Universe (yellow), along with the amount we can reach (magenta). Image credit: E. Siegel, based on work by Wikimedia Commons users Azcolvin 429 and Frédéric MICHEL.

And finally, even if we can’t see any, the Universe may still repeat on scales larger than the ones we can see, even if that renders a complete “loop” a physical impossibility.

how certain are we that we couldn’t travel in a straight line for a very long time and simply return to our starting position?

Sure! Ethan takes on the case of whether you can do this in the current universe, but we can also consider it as a challenge to human engineering. I.e., can we build a curved space such that we can walk in a straight line and arrive back where we started? Here's how.
Step 1: build a wormhole.
Step 2: walk in wormhole until you're at the middle (well, at least away from the edge).
Step 3: make a left (or a right) 90 degree turn.
Step 4: walk in straight line.
You will arrive back where you started once you have traversed the circumference of the wormhole.

You could also set your jogging track up around a black hole, just precisely at the event horizon. I believe that would also technically count as 'walking in a straight line and arriving back where you started' (because of the curvature of space), though to an observer it would look like you were walking in a circle. Just don't step off the curb...

You could also set your jogging track up around a black hole, just precisely at the event horizon.

I think you are confusing the EH with the ISCO.

A thought experiment.
I'm going to visit Andromeda. I will be traveling at TNG warp 9.9
( just to get there in a hurry, and, because I can). The ship is heading straight at the target. By the time I get there, did I travel in a straight line, or not?
Leaving earth, the light from target is where Andromeda was, 2.5 million light years ago. When I get there, the light is now coming from where it is , in my present time. Following the light, I travelled a curved path. To return home, the path, once again will be curved, but I will have to correct my course for the slight change in position over time of travel.
Sound fair?
From this, to travel in a straight line, a computer would be working overtime to calculate a straight line path to the target. It would have to have an amazing memory to store all known star position en route in both galaxies. The mind boggles.
{: ^ )

@4: if you can travel at warp, why are you following the light beam? Wouldn't it be smarter just to travel to the location physics predicts Andromeda will be at arrival time t?

(Also a quibble: AIUI Andromeda is basically 'coming right at us.' So there would be no curve in your path regardless. But you could easily pick a different galaxy and ask the same question.)

I think if the Universe has no center/border and finite (which Big Bang and the expansion implies), and if your spaceship can move faster than light/expansion then eventually coming back to where you started is the only option (if you move straight).
I cannot see any other possibility from a geometric point of view.

@ Eric #5
See my para 2 #4. We only see Andromeda where it WAS 2.5 million LY ago. That does not imply a straight line course to meet our MW.

Well, it's not the direct line of sight to the vision of Andromeda. Then again, the line to shoot the clay pigeon isn't where it is visibly now, despite the time of vision's delay being very small.