Elements Of Life Discovered Everywhere In The Milky Way (Synopsis)

"Far out in the uncharted backwaters of the unfashionable end of the western spiral arm of the Galaxy lies a small unregarded yellow sun. Orbiting this at a distance of roughly ninety-two million miles is an utterly insignificant little blue green planet whose ape-descended life forms are so amazingly primitive that they still think digital watches are a pretty neat idea." -Douglas Adams

If you want to know how many and what type of chemical elements are present in a star system, you need to make a dizzying, intricate array of observations. You need to break up the light from the star into its component wavelengths and look for the signatures of absorption and emission lines corresponding to each individual element you’re seeking, while simultaneously accounting for effects like temperature and ionization.

This is made extra difficult by the fact that most of the Milky Way is obscured by gas, dust and other neutral matter. But thanks to the infrared instruments on the wide-field Sloan Digital Sky Survey, over 150,000 stars have had their spectra taken, located throughout the Milky Way, and the results are spectacular. In particular, the center of our galaxy has more heavy elements than we do, potentially meaning that it could have begun harboring life billions of years earlier. 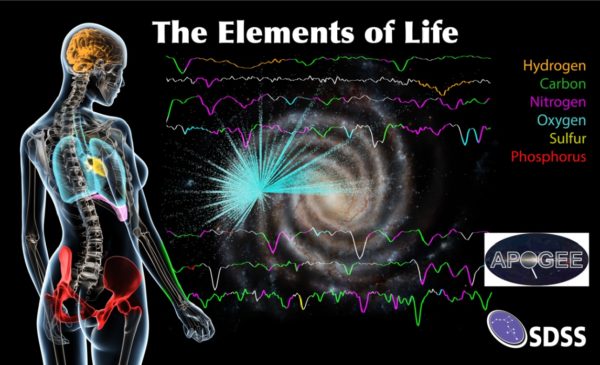 The elements found necessary to life are found throughout the galaxy, but are far more abundant, on average, towards the galactic center. Image credit: Dana Berry/SkyWorks Digital, Inc.; SDSS collaboration.

The elements of life are everywhere, but they’re not equally distributed at all locations. Come find out what it means and what we’ve learned!

The type of star required to parent an equivalent planet to our own may be out of reach until we learn the difference between creation and evolution. In microscoping the known universe we delve deeper down a tunnel of obcession our eyes call light. Yet belief in others over the water was ruled out ions ago when fear caused the flight instinct. 'Aliens' do exist, though our curriculum renders them invisible, they use their light, and by the Law of Averages, we should be friends now.

Have you EVER seen creation? If not, how do you know it exists? If it doesn't, how can there be a difference?

You need to learn the difference between words and meaning.

When feel watch creation the voice inside turn it to evolution as it evolve new creation manifest,now our greatest quest is to name the unnamable