We still don't know how fast the Universe is expanding (Synopsis)

"In the far, far future, essentially all matter will have returned to energy. But because of the enormous expansion of space, this energy will be spread so thinly that it will hardly ever convert back to even the lightest particles of matter. Instead, a faint mist of light will fall for eternity through an ever colder and quieter cosmos." -Brian Greene

It seems like the simplest, most fundamental quantitative question about the expanding Universe of all: how fast is it expanding? Even though it's been more than 80 years since Hubble's most career-defining discovery, we still don't know the answer. In fact, the two main methods we have of measuring it give incompatible results. 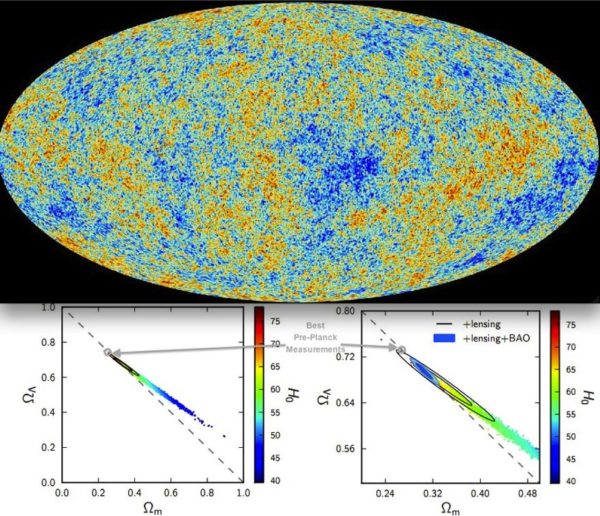 The best map of the CMB and the best constraints on dark energy and the Hubble parameter from it. Images credit: ESA & the Planck Collaboration (top); P. A. R. Ade et al., 2014, A&A (bottom).

The largest-scale observations, like the cosmic microwave background and baryon acoustic oscillations, give a result that's on the low side: 67 km/s/Mpc. On the other hand, distance ladder measurements, relying on individual stars, galaxies and supernovae, give a higher result: 74 km/s/Mpc. But these are known well enough that they're inconsistent with one another. 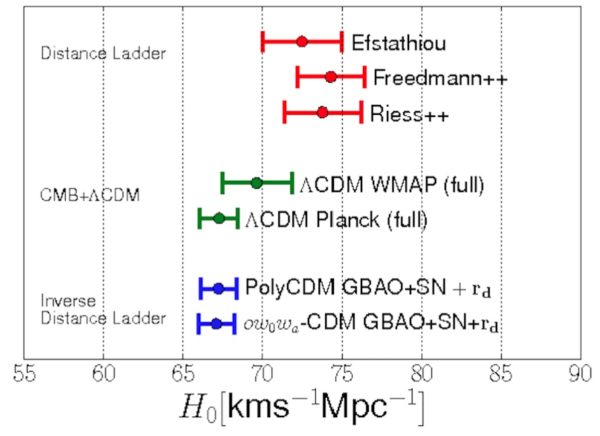 This is a story that's been ongoing since we first learned the Universe was expanding, but the next five years should be critical in resolving this tension. Find out why!

What if both competing estimates are correct -- 67 km/s/Mpc and 74 km/s/Mpc-- reflecting that different things (or different places) are expanding at different rates? How would that affect our impression of the universe?

I, and a few others, have for a long time alleged that the matter in the universe is getting smaller in a relative sense, instead of space expanding. From this perspective of having a continuously smaller measuring sticks, space would only appear to be expanding concerning observed redshifts. Accordingly instead space and the universe would not be expanding at all,

As to the rate that matter is getting smaller, the rate this accordingly is happening is more compatible with a Hubble constant of 67. Forget the Big Bang model, dark matter, dark energy, the Inflation model. The universe is accordingly far too simple for these complicated hypothesis.

But that's just mathturbation. There's no difference if you swap the geometry and swap the operators to re-map. It's 100% identical as a mathematical description and therefore there is no reason to choose one over the other except convention.

It is, in other words, not a new idea, just pointlessly different. There is no result that changes under this idea, only how you write the maths out.

Rather like writing the equations of motion in rectilinear coordinates or writing them in spherical coordinates. All that changes is the maths you use.

And the choice of coordinate system is done to simplify the maths, no other point to it.

is in contradiction to this claim:

"I assert that there is no way that we could tell the difference between the two."

One or the other, or both, are wrong. They can't both be right.