"It isn't only the beauty of the night sky that thrills me. It's the sense I have that some of those points of light are the home stars of beings not so different from us, daily cares and all. who look across space with wonder, just as we do." -Frank Drake

What is it that makes our Solar System special? It’s Earth, of course. A rocky planet of the right mass and composition, the right distance from our Sun, the right atmosphere, the surface oceans, and all the life that’s ensued is what makes us special. Not just special, but unique, at least among the planets we’ve found so far. 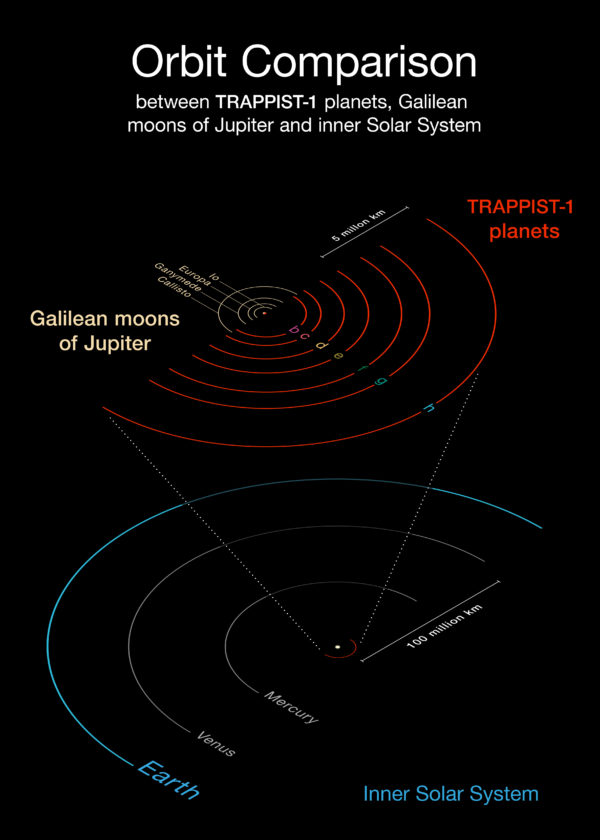 The orbits of the Galilean moons around Jupiter, the seven planets discovered around TRAPPIST-1, and the inner Solar System worlds, shown together for comparison of scale. Image credit: ESO/O. Furtak.

But there are other planetary systems out there with Earth-like worlds. Similar to Earth in mass, size, temperature and many other conditions, these might represent planets where life similar to what we find here arose. For the first time, we’ve found a planetary system with not just one Earth-like, potentially habitable world, but three! 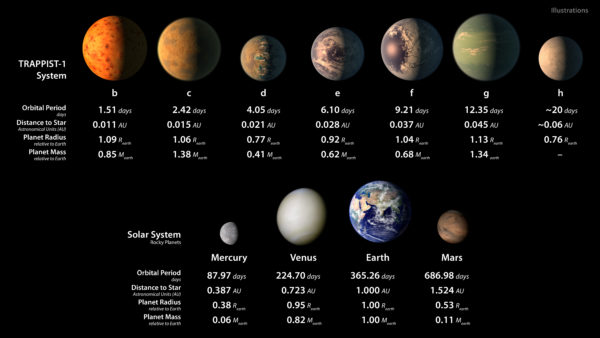 This infographic displays some illustrations and planetary parameters of the seven planets orbiting TRAPPIST-1. They are shown alongside the rocky planets in our Solar System for comparison. Image credit: NASA.

Come meet the worlds around the ultra-cool star TRAPPIST-1, and learn what the prospects are for these worlds being truly Earth-like.

The moons of Jupiter are bathed in radiation from proximity to Jupiter. An engineer on the Juno program said the sun would be worse. Even if these planets were the right distance, size, and composition, wouldn't the close proximity to TRAPPIST-1 completely irradiate these worlds?

Between tidal locking, and the high stellar activity of red dwarfs, these planets may not contain favorable conditions. Didn't Ethan largely rule out red dwarf systems as promising candidates for life a few months back?

Also, these planets are pretty close together, gravitational interactions among them are probably not small. Over a few billion orbits, how stable could the orbits be?

Although the star in the TRAPPIST-1 system is a red dwarf, it may not be a be a flare star - that would be a big problem. The likelihood of tidal locking works against life developing, but if there is a sufficiently deep planetary ocean then it may be able to effectively circulate and transfer heat from the day-side to the night-side without freezing solid.

How Earth does life may not be the only way it can be done.

I saw on Sky and Telescope, that the evidence is that the orbital periods are ratios of each other. Not sure how that effects long term orbital stability though.

It may be low activity for as long as we've been observing it. But, do we know enough about activity in red dwarfs to rule out the possibility that we've been seeing it during the red dwarf equivalent of a Maunder Minimum?

Why photon doesn't get submerged into Higs field...

@ #6
Yes, the energy output of red dwarf stars is generally more variable than stars like the sun. That too mitigates against these planets harboring life, even though they are in the star’s habitable zone.

I have been viewing your blogs for a while now. About your topic "Terrestrial World" Our living world is one of the best sited and most habitual. I have always wondered what keeps us living and while are we in the universe.

Due to their orbital period ranging from ~1.5 days to ~20, would you say the Trappist-1 system exoplanets are tidally locked to their star? If that's the case, the planet's surfaces would contrast in intense heat on the side facing the star, and extreme cold on the side facing away. Following this, it might not be so impossible to suggest that perhaps there may be a band that circles the surface of an exoplanet between these two extremes where the temperature is ideal, or 'just right', for life as we know it to exist

@14: Yes they are expected to be tidally locked, AFAIK.

Keep in mind that Venus is almost locked (224 Earth-day year, and a 242 Earth-day day), but its surface temperature is even and much hotter than orbital distance would predict, due to its atmosphere. Point being, there are other variables which we don't know and which could impact on the habitability of these planets.

a law of motion is the requirement of force to be applied to a mass for motion to occur. Force requires energy and energy dissipates rapidly therefore under no circumstance could a mass like the earth could be moving after billions of years.... a vacuum requires a sealed solid surface to act as a barrier between the 2 atmospheres therefore our pressurised atmosphere cannot exist within the vacuum of space with equilibrium occurring.....mass will move downward through lower levels of density until it meets a mass of equal or higher density it cannot pass through, therefore gravity does not exist...if gravity did exist and pulled down equally on all points then planes would not need gyroscopes to maintain level.....south pole has no magnetic force like the north and furthermore it has never been found and marked....Antarctica as never been circumnavigated and exploration forbidden.....

as a biologist who has studied introduced species I can tell you that adaptation and selective breeding has disproved evolution but it is supressed...ice melts from the process of diffusion and osmosis whereby water molecules move from areas of high concentration to low, heat is not required therefore global warming is unfounded....The heliocentric model of our universe is based off mathematical theory, NASA's fake imagery and heliocentrism which is sunworship.....Einstein himself claimed Tesla as the greatest scientist ever known and that he did not believe in relativity, he just invented it to help prove Copernicus heliocentric model and Newton's laws...Einstein in fact claimed he believed in Tesla's model of a motionless earth.....There is no observable reproducible test which can prove the spin or movement of the earth....Polaris is the only star which does not move whilst the rest rotate around it....Science has been hijacked by mathematicians and NASA artistry....we are being lied to by government, religion and science and the people need to unite as one and finally demand the truth.....Earth is flat demand the truth and rescue true science